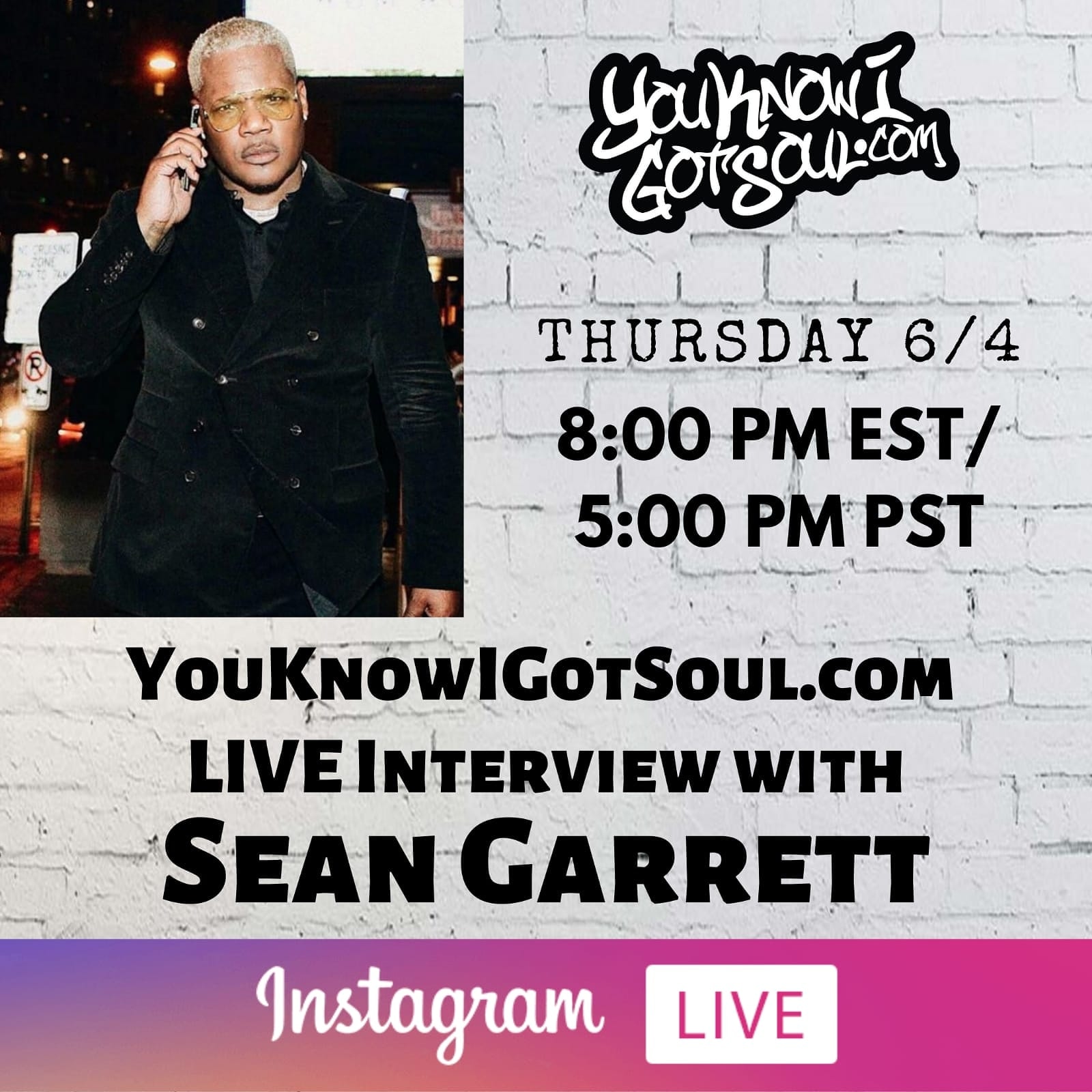 We recently had an opportunity to interview super songwriter Sean Garrett. He is responsible for some of the biggest songs over the last 20 years including “Yeah” by Usher, “Goodies” by Ciara and “Run It” by Chris Brown. During our conversation, we talked with him about his Verzuz battle with The-Dream, his early work early on with Chris Brown and creating hits like “Break Up” by Mario. We also talk about his upcoming album and what we can expect from that.

YouKnowIGotSoul:You had an epic Verzuz battle with The-Dream not too long ago. One of the things that people may not have factored in is that your songs were worldwide hits. If you travel
to places in Asia, it’s very likely you’ll hear those records playing in the streets.

Sean Garrett: Not to be redundant, I just feel like we’re not in the same class. It’s not even a disrespect thing. I grew up abroad and I’ve traveled abroad too. My music has traveled abroad and I just bring that different energy to the game. I feel like he has some more hits to put out to be in my class.

YouKnowIGotSoul: Hits like “Yeah!” and “Goodies” weren’t traditional R&B songs at the time. Did you ever hesitate when presenting these records to labels just in case they didn’t understand those songs?

Sean Garrett: I was really blessed that everything panned out, but it was definitely a challenge. “Yeah” was one of those songs nobody liked. They thought I was tripping, but I don’t think it was just the record. I think it was the timing of the record too because it was the very last song recorded. It wasn’t like I was someone everybody knew. They were like “We already have a plan for this album” but I was like “This song is going to change your life”. I wasn’t aiming for a triple, I was trying to knock it out of the stadium. That has to be the perspective if you want to win.

YouKnowIGotSoul:Talk about your mindset when you worked with Chris Brown early on. You and Johnta Austin gave him his sound on his first two albums.

Sean Garrett: I love Chris and his energy. I’ll be honest though, if he gave me an opportnity to think with him right now, we could have the biggest album in the world. Chris doesn’t need me or Johnta, but he does need us. He doesn’t need us to make money or be a star, but to make something better than “Thriller”? We could do it. We could make people recognize why he’s such an amazing superstar. Some people are just put on this earth to do amazing things and I feel like we could be what Quincy was for Michael or what JD is for Usher. Chris wants to be the greatest of all time and he has the ability to do it. Chris is sometimes in his own world and he deserves to be. When I first met him, he was 15 years old. He was just a cool kid. He’s not just a great performer, people like Chris. It was easy for me to write for him because he was cool. Those kind of people make it easy for you to articulate.

YouKnowIGotSoul: We’re still waiting on Chris Brown’s “Thiller” album. If you and Scott Storch work together with him for a full album, I think Chris could do it.

Sean Garrett: If you lock me, Chris and Scott Storch together in the studio, watch out. Chris can write too now and he’s just real. I’d probably piss him off and be like “Enough of this, let’s talk to the ladies and let’s do it over an uptempo record”. It might piss him off because Chris likes to keep it moving. You can’t do that all the time though, sometimes you have to slow it down and think about it to elevate it. Chris is my little brother though, I would love to make “Thriller 2” album with him.

YouKnowIGotSoul: Talk about your new music that you’re working on.

Sean Garrett: My new album is coming and I’m really excited about it. I’m making an album that I think women are really going to like and guys are going to appreciate. I’m just doing hot music. I feel like the energy I was giving, we’re still missing it. I’m trying to give it. I need you guys to speak louder. If we voice our opinions louder, it’ll be heard. I know fans want it. I feel when I work with people like Beyonce and Chris Brown, it never took long. I don’t feel like I have to make these weird ass arrangements. I just want to do it without the extra stuff because it was never like that before.

YouKnowIGotSoul: When we listen to some of the songs that you did for people like Joe and Donell Jones, one thing that always stood out was your background vocals. Talk about your approach with those songs.

Sean Garrett: I just like making great music. If it needs some salt and pepper, I’m putting it in there. When I would work with Joe and Donell Jones, these are the guys I looked up to as a kid. I never thought I would work with them. I would look at creating those records like duets. I would create records that they would sound good on. I would let them dominate the leads and I would add these lush vibes in the back. It was freedom. People are just not free now in their mind and heart. They’re trying to flex on Instagram, but it’s corny. I just want the freedom to be able to create.

YouKnowIGotSoul: You’ve always been willing to take risks like “Break Up” by Mario and “Diva” by Beyonce. If you didn’t do those songs correctly, they would have come out terrible but you’ve always been able to put the pieces together.

Sean Garrett: I’m pretty careful about what ingredients I choose to work with. Like for “Break Up”, I told Bangladesh I wanted that beat because I knew what I wanted to do with that. I remember listening to that beat for an hour straight and I kept fighting with myself. The beat was so hard, but I needed to come up with a conversation that was important. I knew once I created that conversation, there was no turning back. I knew it was a smash. Even with a song like “Diva”, somebody else wanted the song and they started questioning it, so I called Jay-Z and gave the song to Beyonce. They loved that song.