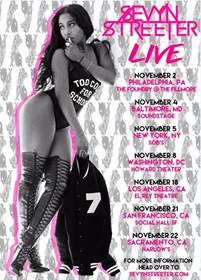 Atlantic Records R&B Artist Sevyn Streeter has just announced her seven city headlining tour beginning in November. She also recently premiered the music video for her song “Boomerang” featuring producer Hit Boy from her recently EP “Shoulda Been There Pt. 1” serving as a prelude to her debut album “On The Verge.” The EP also included the title track which features B.O.B. and has become a fan favorite.

Sevyn will partner up with Music Choice for the L.A. and San Francisco stops to present the “Music Choice Presents: Sound Check Sessions.” She will treat fans in attendence to intimate discussions about relationships, love, life and everything that inspires her writing while playing songs from her previously released projects. The events are part of Music Choice’s MC100 campaign; a celebration of the year in music.