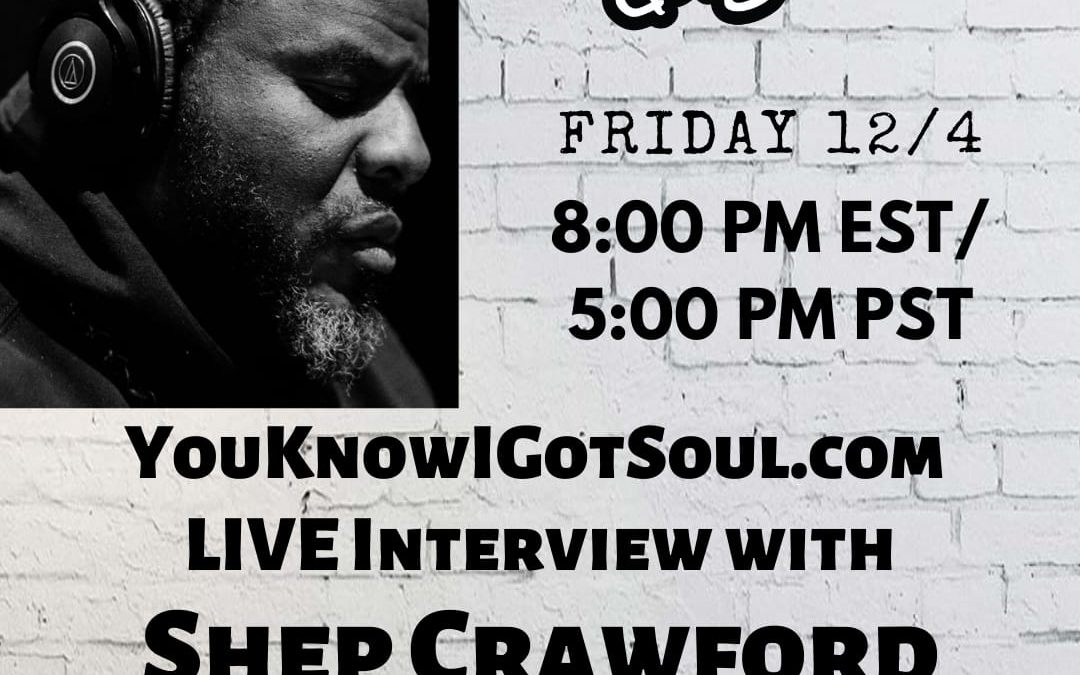 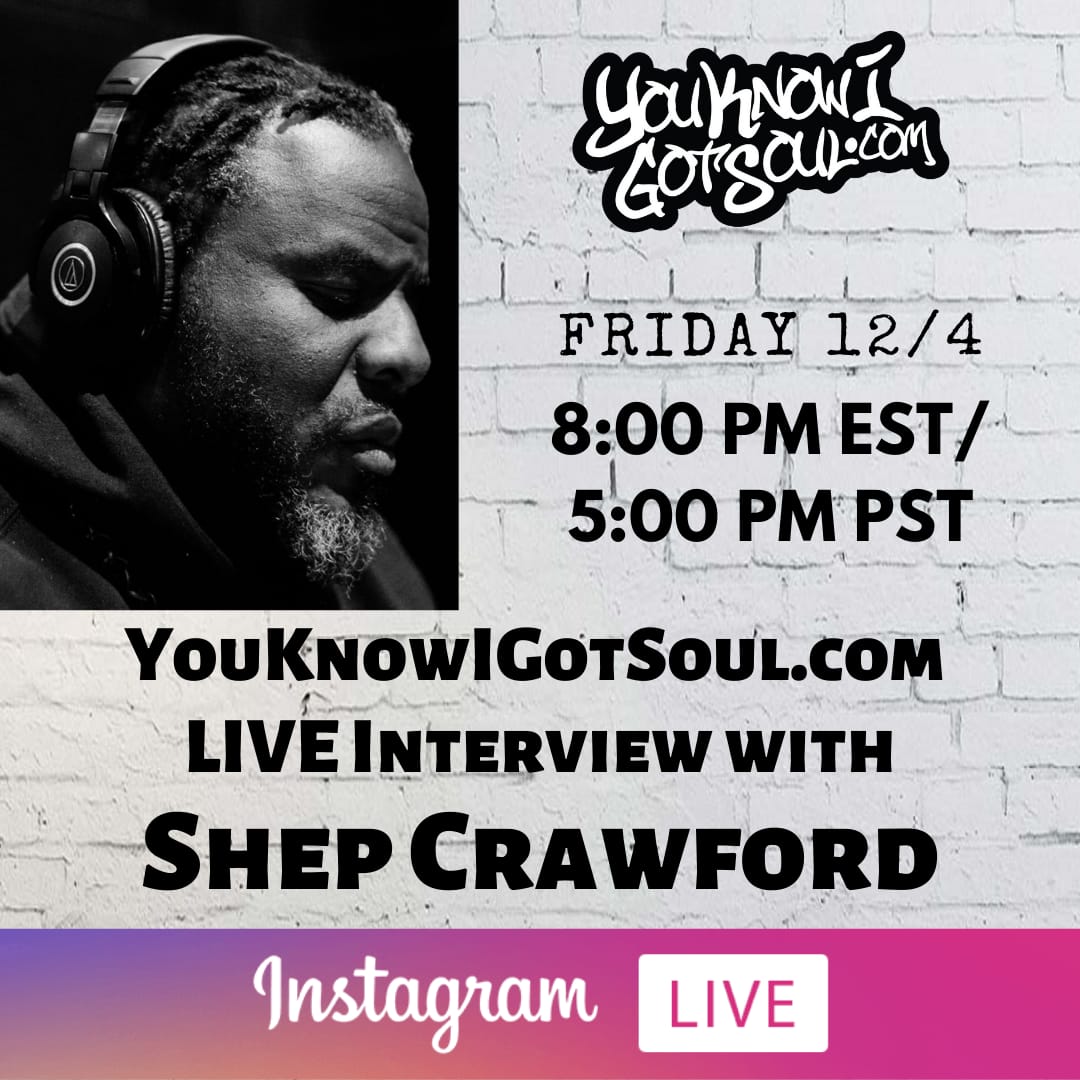 After 25 years in the music industry, Shep Crawford is transitioning away from creating hit records for a greater purpose as he will be returning to the Church full time. This is obviously a big blow for R&B as the talented producer is responsible for creating classics for the likes of Deborah Cox (“Nobody’s Supposed To Be Here”), Tamia (“Stranger In My House”) and Sisqo (“Incomplete”). In this interview with Shep, we discuss his future plans and also reflect back on his great career as one of the top producers in R&B. You’ll have to watch the full video to capture all the gems that he gives us!

YouKnowIGotSoul: You just celebrated 25 years in the music industry and now you’ve announced that you will be retiring. When you look back at the last 25 years, what stands out to you?

Shep Crawford: It’s amazing. First of all, God is good. He allowed me to be as successful as I was. One of the main things I’ll take away with me is working with singers that I admire and also being able to work with some legends as well. When you think about that 90/2000’s era and all those great singers, my name is attached to them and that’s something that makes me proud to tell my grandkids.

Shep Crawford: I was watching the Soul Train Awards and Patti LaBelle was singing. Everybody stood up and loved her performance. I was sitting in my mom’s living room and I was like “I want to write a song for her” because I wanted her to be appreciated on radio and not just the stage. God gave me the idea and I sung it to Montell Jordan. I went in and I started recording the song. I remember Montell coming into the studio and he lent his penmanship to it. We wanted it for Patti. The last thing we heard was that she didn’t like the record. We were amazed that she didn’t like it. It took a few years for it to get picked up. When Clive Davis heard it, she thought it would be great for Faith Evans but she was on Bad Boy. We were already working with Deborah on “We Can’t Be Friends” and Montell played her “Nobody’s Supposed To Be Here” which he wasn’t supposed to. *Laughs* Deborah told Clive that she wanted the record. I didn’t know if she could handle that song until I saw a performance of hers. It was God’s plan in the beginning for it to go to Deborah Cox. Sometimes the finish line is actually a marker. I think if I had written it for Deborah Cox, it wouldn’t be as churchy. I wrote the church feeling with Patti in my mind. I love it and it’s my biggest song ever.

YouKnowIGotSoul: Talk about the record “We Can’t Be Friends” with Deborah Cox and RL.

Shep Crawford: That’s one of my favorite songs I’ve ever written. That song was actually written for 98 degrees when they were at Motown. Andre Harrell wanted to make it a duet between 98 Degrees and Shades Of Brown. They didn’t end up taking the record and then it went on Deborah. RL was his label mate and he recorded it. I love that song. I personally love it even more than “Nobody’s Supposed To Be Here”.

YouKnowIGotSoul: You played a big part in Tamia’s “Between Friends” album which is an R&B gem. What was it like creating that project?

Shep Crawford: Tamia had come off the “Stranger In My House” run and then she did another album after that. I remember she called me in frustration and was like “I don’t want to conform into what the industry is doing. Let’s just make music”. That’s what we did. That’s why it was called “Between Friends”. I went to Orlando and we would go in with no plan. I would sit at the piano and she would start singing. We had so much fun putting that together. There were no music companies putting pressure on us. We felt good about it and it’s one of those albums that we put our heart into. We knew that if we liked it, we were going to go wherever we wanted to go.

YouKnowIGotSoul: Do you think you’re at your best when you’re in that space where you can do whatever you want?

Shep Crawford: Yes, particuarly with Tamia. Her voice is an instrument and it’s easy. Tamia can sing songs that stretch out her vocals but also use her soft vocals on “Officially Missing You”. It’s not just one essence where she has to stay in. She can handle anything vocally and it’ll make sense.

YouKnowIGotSoul: Talk about the Tamia record “Almost” because the writing was great on there.

Shep Crawford: That’s one of the songs that came near the end of the album. I think it’s something we’ve been through. It’s what “What If” moment. It’s the person you didn’t hook up with, but you should have and you actually miss them. Our imagination can make us miss something we never shared. Tamia got it immediately and we went in and recorded it. That’s a fantastic song.

Shep Crawford: When I look back at that, I think the reason why it didn’t come out is because we didn’t go into it the right way. All the ladies had obligations to record companies at that time. They were already signed to different companies at that time and they had different schedules. They had different managers too. There was so much we didn’t pay attention to. We probably should have done a song together and then came back and did an album. I think it was just bad timing at that time.

YouKnowIGotSoul: Hypothetically if you were able to put that Queen project together, what do you think it would have been like for the genre?

YouKnowIGotSoul: Fast forward to the present, you announced that you’re retiring from the music industry. Why are you retiring?

Shep Crawford: I got into the industry in 1995 and I was a Minister then. In 1996, I asked God to allow me to do music for as long as he allowed me to, but when he was ready for me to come out of it, I asked him to pull me out of it slowly. I’ve had a lot of success in it, but I started Pastoring ten years ago. I did both for awhile, but the road that God has had me to go particularly as it relates to community and right after euologiizing Nipsey Hussle, I feel like this is what I’m supposed to be doing. When I do music, that’s all I do. Nothing else matters except the project. It’s hard to do ministry when that’s going on. Right now it’s needed particuarly out here in LA. We’re averaging four shootings a day in LA. I feel like I need to be more available and I feel in my gut that God is saying “You’ve done great with the music, now I have to take you to another place” so that’s where I’mn going to spend the next 25 years. I’m still going to do music when I want to. Tamia has called me and said “I know you’re retired but when I call you, you better be there”. But it’s time for me to make a faith move and not worry about what happens when I stop doing music.