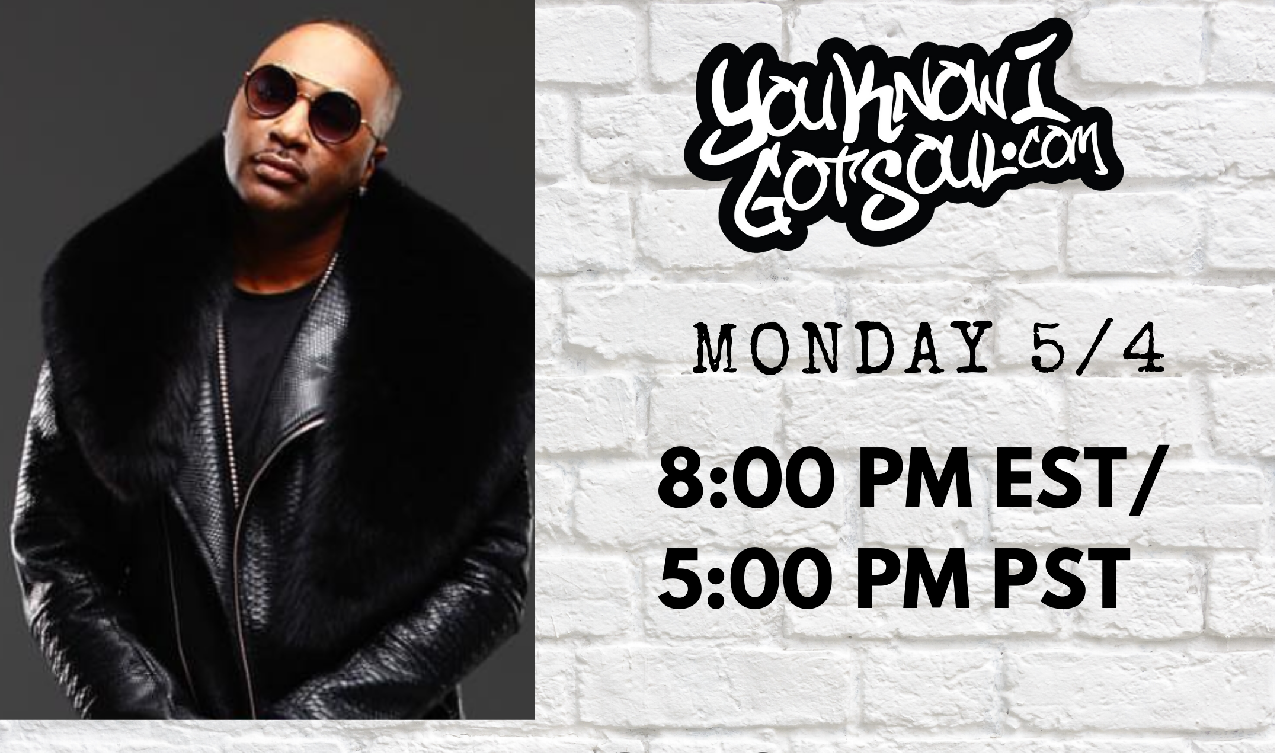 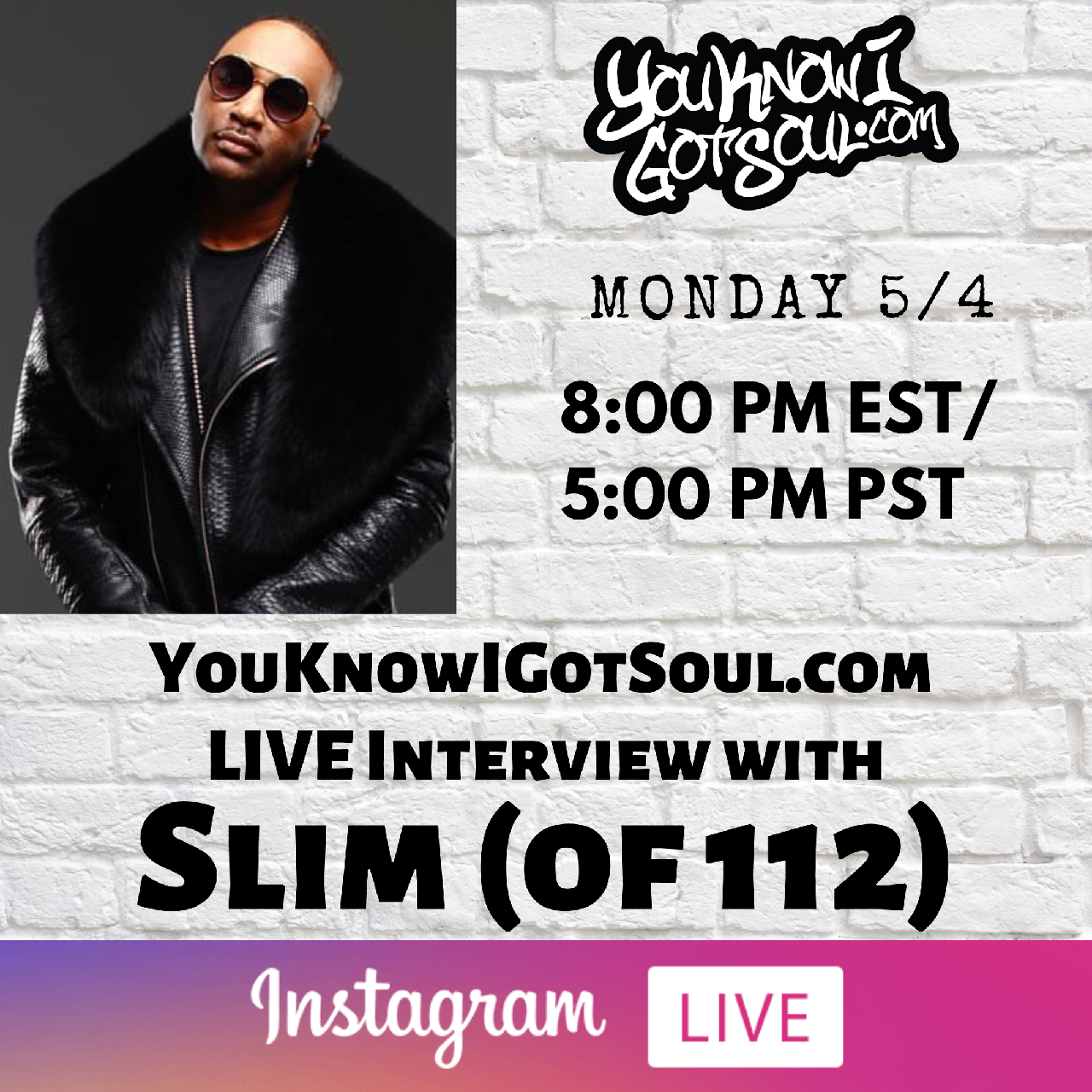 We recently caught up with Slim of 112 for an interview on Instagram Live. We talked to Slim about keeping the 112 brand alive, new music 112 has been working on, the possibility of adding new members to the group, the current members of 112, the history of the group, and much more! Check out what he had to say below.

YouKnowIGotSoul: First off, we appreciate and respect you keeping the 112 brand alive!

Slim: 112 forever. We’ve been doing this for 24 years. It’s ironic because if I were to start a movie about 112, it would start when we all sat at Mike’s grandma’s crib and watched “The 5 Heartbeats” together. We saw all of the stuff they went through and at the time we said it would never happen to us! Little did we know! It’s crazy. This is the industry and I understand that now. I used to take it personal.

YouKnowIGotSoul: Talk about the new music you’ve been working on for 112.

Slim: We’ve been in the studio now. People have been hearing me and Mike talk about doing an EP. We’ve been working on an EP. We like to do things organically. We don’t like to force anything. It’s not like we’re signed to a major deal, so we don’t have to answer to anybody. We can do it however we want to. Same ethics apply. Want to make sure it’s the best representation of the brand 112 as possible. We want to give yall the best project that we can. Yes we started and then we stopped. Then because of all this crazy stuff happening here with the virus, we really had to put the brakes on things. Before it was because we did a lot of shows. We’ve been working on it and it’s been a wild ride.

YouKnowIGotSoul: Was there ever a time you thought about replacing the members of 112 who had left with new members? Some of the most legendary groups of all time went through different lineup changes.

Slim: Everything is on the table when something is thrown at you. Speaking for myself, this was a real game changer, I never expected this. I just looked at it in a sense of if I put myself in the role of a CEO. Let’s say this was Puff or Russell Simmons. What am I trying to do here. I looked at the sense of 112 and the legacy of 112. Regardless of what goes on, I wanted to keep the whole legacy of the group the way it’s supposed to be. Even though there were very strong multi-platinum acts who wanted to be in 112! *Laughs* If I really wanted to do it that way! If the people that wanted to be in 112 would have replaced them….I wonder if people would have tripped! I didn’t want to take that chance. My respects to the former members, I wanted to keep it that way. Any songs we did in the past, I wanted to keep it that way, so the fans would remember Q, Mike, Slim, Daron. I’m the one that made the chant! I did that on purpose. It was a form of branding and I’m heavily into that. Just like my brother Mike has his tattoos of 112 on his skin, I want to do whatever in my power to keep that musical sound alive. I kept it that way and I’m glad I did it that way.

YouKnowIGotSoul: Take it back to how you originally became the lead singer of 112.

Slim: That was a wild situation. If anybody knew us prior to us getting a record deal, the structure of 112 was a little different. The great thing about 112 is the fact that we had four lead singers. Our situation, we wanted to be the group that was not a one trick pony. No offense to any other group. We wanted whoever stepped up to the plate, they would perform very well. In the case of this situation, Mike started the group, amazing voice and talent, I’ve known him since age 13 or 14. At the time if you think about the early 90’s, the sound was different than now. You had the strong soulful singers like K-Ci from Jodeci, or Dave Hollister from Blackstreet. Then you had singers like Stokley from Mint Condition. Once we got to Bad Boy, Puff had a different vision and I’m glad he did this. He created Jodeci, so he didn’t want us to sound like another Jodeci. He wanted us to sound like 112. He saw that I had a different voice and unique voice. Even before we got there, Tim & Bob, we worked with them before and they were on me then. They were saying I needed to definitely learn my voice. They thought I would be an X-Factor in the group. Come to find out they were right! Puff decided that was the way it was going to rock regardless of egos or however anybody feels. Thank God we listened to him. 27 million records sold later. We don’t sound like any other group. Can’t make a comparison. We just honed on what we are very good at. Four lead singers with a guy who has a unique voice. We concentrated on backgrounds and wanted to be known as writers and producers with the same strength.

YouKnowIGotSoul: We loved when 112 and Jagged Edge came together recently to tour together, perform each other’s songs, and even create the song “Both of Us” together. That was such a moment for R&B!

Slim: Let it be understood that us and Jagged Edge are brothers. This goes before record deals or anything like that. Q and Wingo are best friends. Me and Kyle, I’ve known him before. We always talked about working together. It’s put out there that 112 and Jagged Edge changed sounds sonically in our generation. I understand why people put us with each other. I get it, but we are brothers and we wanted to work together. It is like a small competition thing, so we bring out the best in each other. It’s crazy because we wanted to do a record where both of us could relate. We’re both always on the road, you have relationships and situations. With women, you have to reassure them! We wanted to write a record where our music is our own medicine. But you can take out our faces and put your own face in the song.

YouKnowIGotSoul: What was the first album that 112 was featured on as a group?

Slim: As artists it was our debut. But as artists we were blessed to write and produce on multi-platinum albums before we even dropped. Total, their debut album, we wrote “When Boy Meets Girl”, you can hear me actually singing the sample over. The young guy who did the beat we know now as Pharrell. We have Pink, 112 wrote and produced the third single on her debut. LSG, New Edition, Allure. We had records for people we had worked with. The Frankie album. That was one that didn’t come out like it should have, if that album would have come out. First of all, he was one of the first artists to have Mary J. Blige, Faith Evans, 112, the whole album was produced by Chucky Thompson. This was an amazing album. Faith Evans’ first album we were on that, her second album we wrote “Caramel Kisses”. Kelly Price we did 3 records on her debut album. It’s a blessing doing what we set off to do before we even came out with an album. Always remember with 112, our goal wasn’t just to be the #1 R&B singing group, we wanted to be sort of like who we look up to: Full Force. They had hits for themselves, but also penned records that went worldwide! Backstreet Boys, Britney Spears and N Sync records and people had no ideas! Also we looked up to New Edition. There would be no Boyz II Men without Michael Bivens.

YouKnowIGotSoul: Talk about the future of 112.

Slim: The book of 112 isn’t over. This is what I want to tell everybody. 112 is not about the four guys you are familiar with. 112 is a brand just like how we look at The Temptations, The O’Jays, Boyz II Men, Jodeci. They might not even have the same members in the group, but one thing you can’t change is legacy. That’s what we work so hard to be. Remember our goals were to be not only the most successful R&B singing group, but to be the best writers inside of a group. The best producers inside of a group. When you start making comparisons as far as groups are concerned, you have to see exactly what we were trying to do. What did we do to transcend one era to the next, so that the next group does the same thing and takes it even higher? That’s a challenge to all groups coming out. If you just want to sing over some hot beats, that’s not good enough. Push it to the next level, see yourself as the next CEO, the next P. Diddy. Brand yourself, own yourself, be your own boss. At the end of the day, everything lies on you. That’s one thing I’ve learned in this industry, things comes up, life happens. Who would have thought the guys I grew up with would break up not once, but two times? Life isn’t fair, so what. What are you going to do about it? The first time they did that, I felt like I was thrown under the bus. Usually they blame the lead singer, but the lead singer had absolutely nothing to do with that! What did I do? I believed in myself, put together a label, went out and made history, first R&B act to start a label at Asylum Records, where it was all rappers. Then dropped the single and it ended up being one of the biggest independent records. “So Fly” was a top 5 platinum single! At the end of the day, you have to take lemons and make lemonade. Here we go again, we are faced with this dilemma. You’ve got two guys, God Bless them, they want to do what they want to do. We respect them. It’s all great. So what are we going to do about it? One thing I learned, even when I had a successful solo career. Everybody around the world wants to still talk about 112. I took it upon myself to be the CEO, I learned from P. Diddy, he taught me a lot of good things. I’m applying it. It’s working the correct way, I appreciate all of the fans. Right now I’m also working on putting out records in the country genre with Blanco Brown.

YouKnowIGotSoul: Will there ever be 112 again with all four original members?

Slim: Well, for right now, when you start a book you have to let the book go through its chapters. I just feel like there is some purging that needs to go on. Once you start something, you have to finish all the way through, good, bad, or ugly. The truth will come out. Once the purging of egos, then I feel like a rightful apology needs to be said! I’m saying that with sincerity and no shade. I’m wide open and transparent. If I do something wrong, I own it. That’s part of being not just a great artist, but being a man and a great person. Everybody is not perfect, but when you do something wrong in front of everybody, and God blessed us to be, in order to heal there needs to be accountability. Until those things happen, we’ll see.