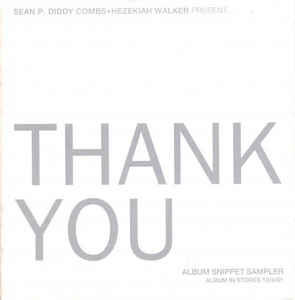 It’s easy to forget that way back when Puff Daddy was working on a Gospel album with his Bad Boy Record label. The album was to be called “Thank You” and was executive produced by Diddy in collaboration with Hezekiah Walker.

“Thank You” was to be released sometime in 2001 but currently remains unreleased for unknown reasons. The first single from the project that did release was called “You” and featured Faith Evans, 112, Carl Thomas, Mario Winans, Thelma Guyton, Asia & Ashley, Cheri Dennis, Tammy Ruggeri and Hezekiah Walker.

Based on a tracklist we were able to find on The Unofficial Bad Boy Blog, other artists who were said to have contributed to the album were Brandy, Kim Burrell, Mary Mary, Fred Hammond, Kelly Price, and Joe.

Thanks to our loyal supporter and loyal Joe fan Mery Joe, we are able to get a listen to the song Joe contributed to the project. The song is called “You the Man” and is truly a rare find indeed as it’s become unearthed nearly two decades after it was shelved.

This is also a rare opportunity to hear Joe singing a Gospel song. It’s a natural fit though since Joe grew up in the church with both of his parents being ministers. It would certainly be welcome to hear Joe release a full length Gospel album someday.

Until that day arrives, enjoy a rare listen to “You The Man”.