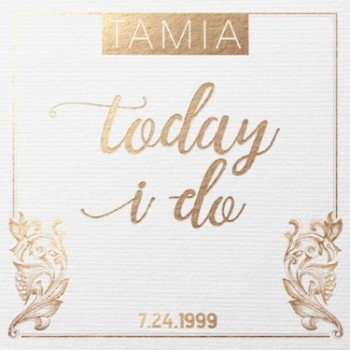 Legendary r&b singer Tamia celebrates 19 years of happy marriage to husband Grant Hill with the release of the visual for new single “Today I Do”. The video features an intimate look into the couple’s special day which unfolded in front of fans climaxing with them saying “I Do” at the altar in 1999.

The song is the latest offering from her upcoming album “Passion Like Fire” which is set to release on September 7th, 2018 via 21 Entertainment Group/Plus 1 Music Group/Entertainment One. She added about the song:

“I went into the studio with Lil’ Ronnie and Sickpen with the intention of writing a wedding song. I envisioned a bride walking down the aisle. A wedding day is such a special moment in people’s lives and I wanted to write a song that could soundtrack that moment. The power of a love song never dies. It’s timeless.”

The upcoming album “Passion Like Fire” is led by the hit single “Leave It Smokin” which has reached #2 on the Urban A/C radio charts.

Additionally, check out our interview where Tamia where she broke down the upcoming album for us.

The singer will also be heading out on tour to support “Passion Like Fire” starting in September. Dates are below.