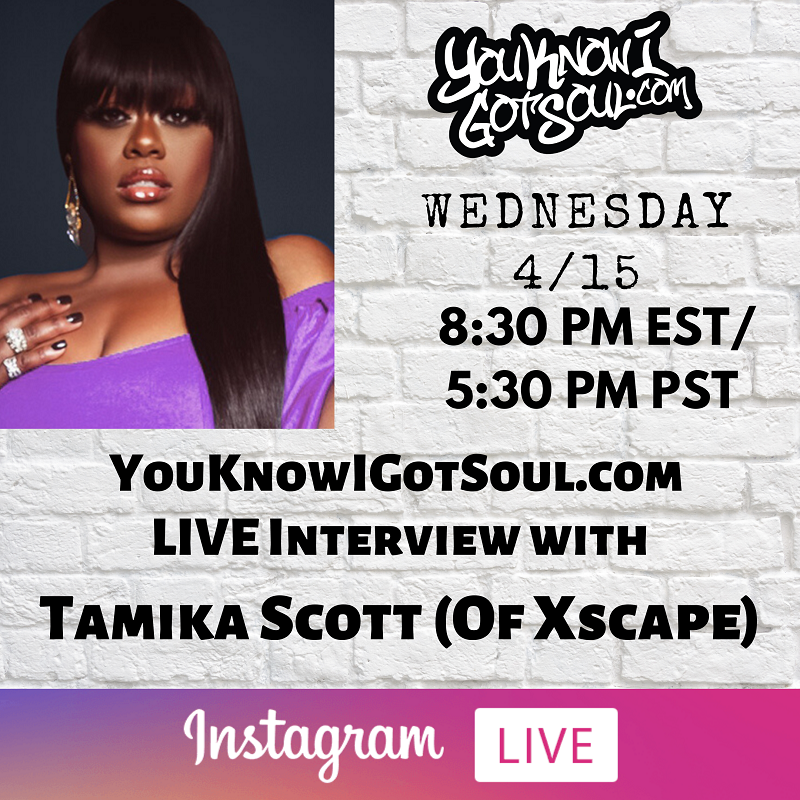 We were recently joined on Instagram Live by Tamika Scott of the legendary group Xscape for an exclusive interview. During our discussion, we talked about the release of her long awaited solo project “Family Affair”, reuniting with Xscape, the status of the group, and much more. Check out what she had to say below!

Tamika Scott: “Family Affair” is just a little short EP that’s about my life, things that I’ve accomplished and had to overcome. It’s just a little open book about the things I’ve experienced.

YouKnowIGotSoul: Take us through the creative process of putting this whole project together. We know you’re a true vocalist, but how does a project like this come together.

Tamika Scott: I’m the last member of Xscape to put out a solo EP. It was almost like an accident. I really didn’t see myself doing anything solo. I love being in the group. But I had written songs for a lot of different artists. There was a particular song I wrote called “Almost Over” many years ago. I had went for an operation for a thyroid issue, and my doctor told me to get an outpatient surgery. It ended up she messed up, and I was hospitalized for a long time. During the hospital time I was so depressed. We couldn’t do anything, we had shows we were supposed to do that the group couldn’t do. They didn’t know if I was going to live or not. My husband brought that song back, it’s a song telling you not to give up. It tells you to keep going no matter what. That song inspired me. If it inspired me through one of the roughest times in my life, I wanted it to inspire and encourage other people. So that was the birth of “Family Affair”.

YouKnowIGotSoul: You are the last member of Xscape to release a solo project. Did you have any fear or anxiety to do so?

Tamika Scott: I did want to do an entire album. But I did the EP to give my fans something to see how they will react. You can be in love with something, and somebody else might not like what you do! I wanted to give them just enough to see that it was something they wanted to hear. The response has been overwhelming.

YouKnowIGotSoul: You’ve been on the road with Xscape. It’s really cool that you guys have been on the road for the past couple of years and had amazing response. Did you even realize how big of a following the group still had today?

Tamika Scott: No I didn’t. *Laughs* I couldn’t believe it. When we were supposed to do Essence Festival, they put us in a little room, not the main stage. When we were inside, we could hear the people chanting for us! It held about 5000 people but the place was packed. People couldn’t even come in. They had to bring us back to the main stage after that! I was happy they still love us!

YouKnowIGotSoul: It seems that not only the fans who grew up on your music still love your music, but you also have younger fans as well. Why do you think that is?

Tamika Scott: I think because our music is timeless. The music that we do, it has meaning to it. You can sing it in any generation. Timeless music.

YouKnowIGotSoul: Talk about the EP that Xscape dropped a few years ago, and expectations that you have for new music from the group.

Tamika Scott: We just want to make good music. We want people to remember us for making music like we did in the 90’s. It wasn’t the whole group, it was me, my sister LaTocha and Tiny. Kandi didn’t want to do music because she felt it would tarnish our legacy. So we went on and did Xscap3. When she comes back, we go back to Xscape. I would say we are the BBD of New Edition, we are the three of Xscape. Our music is more like hip hop than the Xscape sound.

YouKnowIGotSoul: Let’s go back into your history. Take us through working with Jermaine Dupri originally and how you guys created with him.

Tamika Scott: Jermaine Dupri is a musical genius. There were times when we were in the studio and he’d ask us to do a note. He’d sing it to us! He would hear something and sing it! Then we’d sing it back. It used to be so funny. Jermaine swears he can sing! But the songs and understanding, everything was so us. What he wrote was tailored to us as a group.

YouKnowIGotSoul: What do you remember most about creating Xscape’s debut album “Hummin’ Comin’ at ‘Cha”?

Tamika Scott: The fun we had! We were just graduating high school and we were little girls! To be able to go out and be successful in our craft was amazing. It wasn’t just work. We worked hard, but we made sure we played a lot. I remember one of our most memorable times was being at a conference and 2Pac was there. We were so silly back then. It was one of those hotels where all of the rooms faced into the middle. We had water guns and we squirted and hit people with them! We hit 2Pac and he started counting the floors we were up, and he started coming up to get us! We took off and ran into our own rooms! We would just have dumb fun back then!

YouKnowIGotSoul: On the second album album “Off the Hook”, the song “Who Can I Run To?” was your shining moment. What do you remember most about that song?

Tamika Scott: Actually, my sister introduced us to that song. When I heard it, I didn’t like it was first. I thought it sounded old! *Laughs* She made me listen to the melody and tones. I didn’t want to sing lead! Jermaine told me I was singing on it! So I had to.

YouKnowIGotSoul: On the third album “Traces of my Lipstick”. Talk about the song “All I Need”.

Tamika Scott: That sound is from the church and Jermaine knew we had to do it. Our voices are so unique that they just blend perfectly. I had fun doing that with the group.

YouKnowIGotSoul: What are some Xscape songs that people slept on?

Tamika Scott: I would say “Hard to Say Goodbye”. That song should have been a single. “Softest Place on Earth” too.

YouKnowIGotSoul: Why wasn’t there ever a video for “Softest Place on Earth”?

Tamika Scott: That will be in the biopic that’s coming out! *Laughs* At that time, we were almost disbanded and dysfunctional. We were in the midst of breaking up. People couldn’t agree, some people didn’t want to do it. It was a split decision at the time. We just weren’t on one accord. We needed that break. We had been at it since we were 15. So by the time we reached our late 20’s, we definitely needed a break to recoup and think about what was important.

YouKnowIGotSoul: You’ve been touring for so many years. Is it still fun or just it just feel like work?

Tamika Scott: We still have fun. When we reunited in 2017, everybody had their own tour buses. Our family was able to come out on the tour bus and see us perform. On off days we’d go out and have a good time. We know how to incorporate fun with work.

YouKnowIGotSoul: How did you originally develop your skills as a vocalist?

Tamika Scott: I grew up in a musical household. My father who is a pastor, he had a group back in the day called Scott 3, with him and his two brothers. They were famous in Detroit. Everything we did was through song. He taught us, he played piano.

YouKnowIGotSoul: Will we ever get another Xscape album with all of the members?

Tamika Scott: We have more to give. We’ve grown up and matured. We’ve experienced a lot of being with the group. There is more inside of us, it’s not over yet!