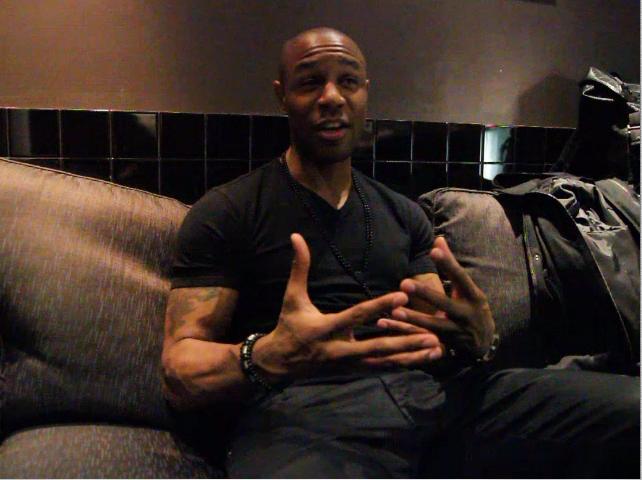 After coming off stage from performing in front of a packed house at of B.B. King’s in NYC, YouKnowIGotSoul caught up with Tank backstage. This particular performance came just a week after Tank released his first ever official mixtape “Diary of a Mad Man”. In addition to discussing the mixtape and the great response it’s been getting so far, in this interview we touch on what to expect on his new album “Savior”, when to expect the album, and balancing writing for other artists.

YouKnowIGotSoul: You just released your new mixtape “Diary of a Mad Man”. It’s your first official mixtape. What is your motivation behind releasing it?

Tank: They had been asking me for a while like, “Man you should do a mixtape. Your fans want to hear it. They would love to hear some cool new music from you”. I was kind of up and down about the mixtape type thing, but I knew it worked. I know the power from seeing Drake, Kanye and Lil’ Wayne put those things out and really rock it. I didn’t know how it would work for R&B. My first time out the gate and everybody was really excited and talking about it. It really made me feel good that my first time out, I kind of hit it big. They’re picking their own songs on there like “Underrated”, “Diary of a Mad Man”, “Dead Man Walking”, “Money On The Floor” with Kevin McCall, Ace Hood and Slim Thug. Also “Stars Girl” with Kevin McCall. Man, it feels amazing. It feels like I have an album out.

YouKnowIGotSoul: Give me some background on how you chose what songs to put on the mixtape. There’s a couple that I’ve heard before in the past and you have some new ones on there.

Tank: The process in choosing those songs was kind of like, I just wanted to put a different flavor out there than what people were used to hearing from me. Maybe two or three of those records are songs that were going to be on an album called “Aggressive” and that was just going to be me being aggressive with raw, uncut tracks, but still saying my thing and doing my thing on top of it. They made sense with “Diary of a Mad Man” because it’s basically just me getting some stuff out of my chest that I can’t normally say the way I want to say it with people just wanting the love songs and the ballads, it’s like “Okay I’ll give you that. I’ll make you pay $9.99 for that, but this right here I’ll give you this other side of me and I’ll give it to you for free”. This way, there’s no pressure on the fans to have to like it or when you put it that way, you give them a chance to just digest it on their own. It makes more sense to them. The response has been amazing

YouKnowIGotSoul: I’ve read on your Twitter that you’re planning to shoot videos for some of the songs.

YouKnowIGotSoul: Will your new album “Savior” have the same style as your mixtape?

Tank: “Savior” is going to be the straight up R&B thing. It’s got some elevation just as ‘Maybe I Deserve’ went to ‘Please Don’t Go’ to ‘Emergency’. The elevation is still there. It’s still R&B on the next level. It’s not old at all. It’s not the same thing that I’ve done, but it’s what I do. Just a little more current. I’m a producer and writer for a lot of different artists, so to be part of the current and to drive the current isn’t really difficult. When it comes time to making my album, I’ve naturally progressed to do that. When you hear the new singles, you’re going to be like ‘Man!’ We’ve stumbled onto something that’s going to be really good.”

YouKnowIGotSoul: How is the album coming along?

Tank: The album is done. This album is actually done and ready to come out probably sometime around March. It’s the first time this has happened where the album is done, packaged and ready to go. Now we have time to actually put our entire plan together with really kicking this thing off really big. We’re going to get around the country and Obama this thing, we’re running for president. We’re ready!

YouKnowIGotSoul: You have the single “Compliments”. I know you’re doing a big viral push for that on Twitter. Talk to us about that song.

Tank: “Compliments” is one of those records where we just wanted to get out there to the public and let people know that we had a new sound going and some new things popping. We’re still appreciating the ladies at, of course, at all times. The response to that was crazy. The song features my new artist Kris Stephens. She’s my writer and helped me write half of the “Savior” album. She’s coming into her thing. The ladies, I think they needed that. I felt like calling them “Beautiful” just to change the temperature a little bit and they appreciate it.

YouKnowIGotSoul: How do you balance writing hits for others and writing songs for yourself as a solo artist?

Tank: For me it’s kind of easy to do that because I don’t really want a whole bunch of me’s running around. I don’t want a whole bunch of people sounding like me. I don’t mind being an inspiration to people, but I feel like everyone is an individual and they have their own thing to offer. When it comes to me producing and writing for other artists, I get into that artist. I listen to the work that they’ve done before, what they’re working on now that makes sense to them and how they’re feeling and where they want to go. I just try to add something to it. I just try to add a little décor to the room that they already have a little furniture in. Don’t take them out of their element, but just try to enhance it a little bit. Therefore, I help to create their thing. When they hit the stage, they’re doing them. They’re not doing Tank because I want to be the only one doing Tank.

YouKnowIGotSoul: Has there ever been a song that you wrote for another artist that you wish you would have kept for yourself?

Tank: You know what, no. I think people have been more like, “Man you should have kept that!” more so than I have because I value the art of doing everything. When I walk into Babyface’s studio and I see plaques on plaques on plaques. It wasn’t just Babyface doing “Tender Lover”, but it was Babyface with TLC, Usher and all these different projects he was a part of that just made him great all the way around. That’s the thing I want to be. I want to be great all the way around.

Tank: “Savior”, get it. “Diary of a Man man”, get it. Download it. It’s free, you’re going to love it. Work out to it, you can have a good time to it, you can have sex to my music. That’s what my music is for. Enjoy yourself. I love you to my fans, to all the beautiful ladies out there, I appreciate you for always continually supporting me.