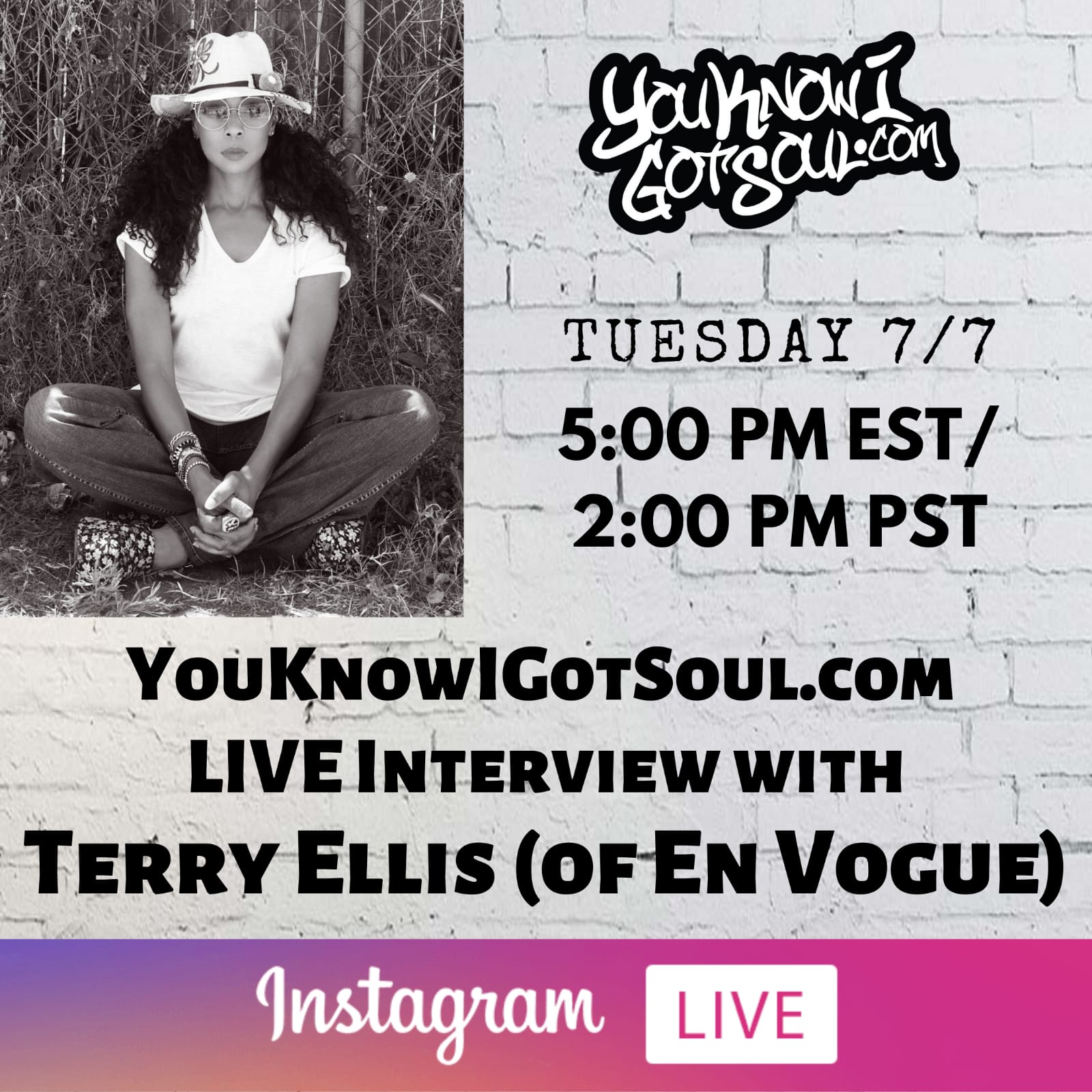 YouKnowIGotSoul had a chance to talk to Terry Ellis from the legendary R&B group En Vogue. We talked to her about the new solo single “Angry Black Woman” which she put out a few months ago to discuss inequality and police brutality. We also talk to her about her debut album “Southern Gal” which came out in the 90’s. Lastly we go down memory lane and talk about some of her favorite En Vogue moments including the creation of their debut album “Born To Sing” and sophomore album “Funky Divas”. We also talk about the group’s most recent release “Electric Café”.

Terry Ellis: The song is definitely about the message, it’s not about me. The song was written four years ago and it was written as a cathartic release of built up emotions and feelings that I was feeling with policy brutality. I just wanted to give a voice to those thoughts and feelings.

YouKnowIGotSoul: People always talk about your solo album “Southern Gal” that you released in the mid 90’s. Take me back to that time in your life.

Terry Ellis: That was right after our second album. We were on hiatus and I just decided to do a solo project. Another cathartic release for me, but it was a lot of fun. It was a great experience and it inspired me what to do more as a solo artist.

YouKnowIGotSoul: What was it like recording your album without the rest of your group?

Terry Ellis: It was scary. It’s another reason why I’m glad I did it. Unlike the other ladies in the group, I never wanted to be a solo artist. Embarking on that was truly a journey of the unknown, but it was very enlightening and exciting.

YouKnowIGotSoul: For those that haven’t checked out your solo album, what do you want people to take away from it?

Terry Ellis: Maybe a little piece of who I am and what part of Terry Ellis makes up the whole of En Vogue. The group was never about one individual and what made us great was what each girl brought to the table. “Southern Gal” represents a small part.

YouKnowIGotSoul: En Vogue is celebrating 30 years since the debut album. Talk about your memories of creating that debut album.

Terry Ellis: It was the beginning for us. It was exciting for me because I moved from Houston to be in the group. I grew up and became a woman in the group En Vogue. It was just an exciting time. We were blessed to work with producers who had a high respect for women. They shared the opportunity with us to write on our first record which was huge. We were able to express ourselves and they made us understand how important that was. They gave us the platform to do that. Hearing our song on the radio for the first time was super exciting. It was just a great time. The bar was real high for music back then, so we had some strong shoes to follow.

YouKnowIGotSoul: What was artist development like for you during that time?

Terry Ellis: We would all get together and we would just have writing sessions. We would sit and talk about what we felt and what we wanted to express as women. We would get in with incredible choreographers and we would rehearse daily. It was boot camp for writing and dancing. We had a publicist who would have meetings with us about conducting ourselves in interviews and how to focus on what’s important and express yourself intelligently. That was artist development in the 90’s.

YouKnowIGotSoul: What clicked for you on the second album “Funky Divas”? That one was mega successful.

Terry Ellis: Experience, growth, evolving with the time and having more money so we were able to project on a different level.

YouKnowIGotSoul: Take me back to that time in your life. That was pre-social media and younger people may not realize just how big the group was at that time.

Terry Ellis: It was huge. I’m grateful for every award we’ve received and back then we were getting plaques commemorating record sales. We’re so beyond that now. When you think about record sales, selling ten records right now is exciting. It was great because you had more to strive for and it made you invest more. It made you better as an artist because you were striving for success.

YouKnowIGotSoul: En Vogue released the album “Electric Café” a few years back. What sparked the interest for you to record new music? A lot of veterans have given up on making new music.

Terry Ellis: It’s not over until the fat lady says it’s over. It’s what we love to do and it’s pure passion. We’ve been blessed to have fans who continue to ask us for more music. Although they just want to hear the hits, they have inspired us to keep moving forward and keep getting in the studio. As an artist, you can’t help but to want to create. It felt incredible to see the success of “Rocket”. The song was written by Ne-Yo and it was really awesome to work with him. It was really awesome and it felt like we didn’t miss a beat because we’re always recording.