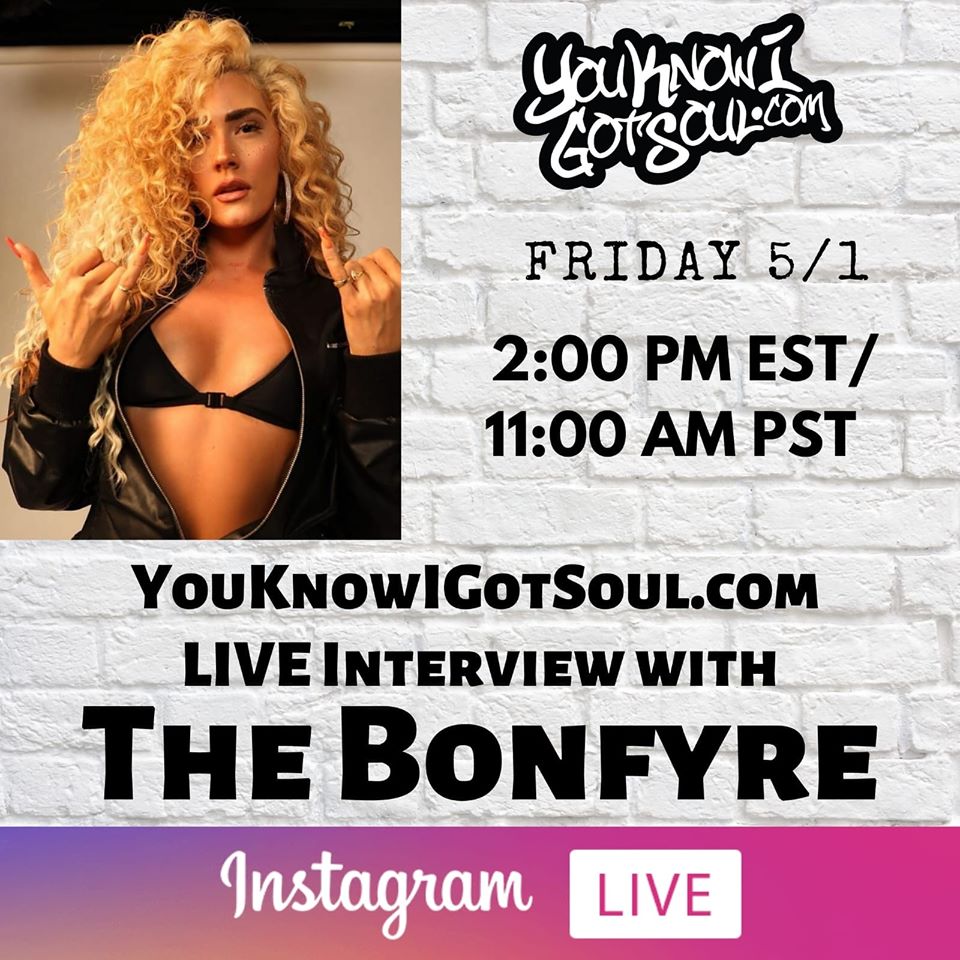 We recently caught up with R&B artist The Bonfyre for an interview on Instagram Live. We talked to the talented vocalist about “Love, Lust & Letdowns” which is her debut album. We dive deep into the creation of the project, the reason she decided to split the album into three parts and also go through each song to find out what went into the songwriting and production for each of those records.

The Bonfyre: Honestly it’s a weird time in the world right now. If you asked me how my first album was going to be like and where it would be, I would have said “Somewhere on a beach”. I’m not though, I’m currently in my room. My new album hasn’t been out for 24 hours and it’s just amazing to see the feedback. It’s definitely a blessing and it’s overwhelming. There was a lot that went into this and there was a lot of emotion. It was very real for me. It took awhile, but I’ve formed the most beautiful baby. My album is my baby. I just hope that it reciprocates how it did to me while making it. I hope that this is music my fans can really connect to and get them through some things. It’s kind of surreal having an album out and I did it in three chapters. This is the first chapter out right now. So far so good, it feels good.

YouKnowIGotSoul: You’ve had number one hits on radio, but you haven’t had a huge social media presence. Was that intentional on your part?

The Bonfyre: Definitely. Social media is so weird to me and it shouldn’t be because it’s what the world is today, but I’m such a physical person. I like being face to face. The beautiful thing and what I’ve learned from being in this situation in the world right now is that it gives us artists an opportunity to really hone in on the rawness. It gives our fans an opportunity to tap in. It was hard getting used to being so open and sharing my world with everyone through a phone. It’s always been about the music and it will always be about the music. It’s what’s most important. That wasn’t even my strategy, it’s just who I am as a person. Of course I want to connect with my fans and really be intimate as far sharing my world with them, but I share my life through my music.

YouKnowIGotSoul: Talk about splitting the album into three parts.

The Bonfyre: It’s so crazy because I originally didn’t want to have three chapters. I wanted to just put it out, but when I sat back and thought about it, I hate microwavable music. Obviously fans that listen, they’re so eager for more. As artists, we’re always searching for the next hit but when you get in that zone, no one has the chance to soak up that emotion and what the music is. It’s not just about the music. Of course I want number one records, but it’s about the feel and emotion. It’s about allowing your fans to sink in. I don’t see people doing three chapters and artists having an album out in three parts. I wanted to try something different and I wanted to give my fans a chance to soak it in. I’m going to keep it real, it’s hard for me to digest an album when it’s 18 songs. It’s hard to focus. I really want my fans to focus in on these chapters and understand where I was coming from. Each chapter has six songs, so it would allow them to do that. I’m giving people music every few weeks, but it’s really an album.

YouKnowIGotSoul: With streaming it’s so easy to listen and find music, so no one really has the attention span to listen to a whole album without skipping songs 30 seconds into it.

The Bonfyre: Exactly. I can’t even remember the last album where I was like “This is a no skip album”. This isn’t to discredit any artist, it’s just the attention spans. I wanted to create a different style of connection.

YouKnowIGotSoul: How did you break down the three chapters?

The Bonfyre: I thought about doing one about each topic, but I just made a mashup. I didn’t want to separate it because it’s a full length album. Each chapter is a collection of those feelings and emotions. “Love, Lust & Letdowns” represents relationships. It’s for everyone who has felt pain, love and lust. Everything goes through those things. Love represents my current situation. I’m so in love and I’ve never had this feeling before. Lust represents a man that’s always around and that will just be popping up just trying to get in between what I have going on. Letdown is the motherfucker who broke my heart. It’s the man that I’ll never forget and that made me feel small. He didn’t allow me to be great. We all experience those emotions and I named it that because that’s my real life experience. Everyone can relate to that.

YouKnowIGotSoul: When I listen to this album, I feel like the sound is a little darker than your debut EP. Is that what you were trying to go for?

The Bonfyre: Honestly, creating this album I was in a very dark space. I was in the letdown stage. That’s what I was experiencing at the time. I would say maybe it feels that way because of that reason. I was connecting to those bass lines and those feels. I make everything into a damn R&B song. *Laughs* It could be a Pop song and I hit that K-Ci & JoJo really quickly. I love that tone and feeling. On the other two chapters, I have a lot of brighter songs. I think it’s a happy medium. It may feel darker because of the first chapter, but when it all comes together, I think it’s a great collective of each feeling.

YouKnowIGotSoul: You’re writing on a lot of this album. Was that something Raphael Saadiq pushed you to do?

The Bonfyre: I’ve always been involved in the creative process, but on this album I was really tuned in. I co-wrote everything on my album. I didn’t work with a huge team, but the writers I did were so phenomenal. The songs all came from journal entries. I worked with really incredible writers and producers. I remember Raphael, Yancey and myself had a little camp. We had phenomenal people come in and really create with me. If you could see the colors in that room, it was so beautiful. It was such a dope experience to lock in and tune into my spirit and soul. I was tuned into this album and putting everything inside me into it