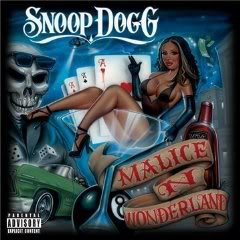 Snoop Dogg is preparing the release of his 10th studio album called “Malice N Wonderland” and the tracklisting has just released. As usual, Snoop brings an all-star cast with him. Eight of his nine albums have gone platinum so far, so it’s obvious he’s one of the biggest names in hip hop today. Thus far, the first two singles “Gangsta Luv” and “That’s the Homie” have not done much on the charts.

“Malice N Wonderland” will be in stores December 8th.