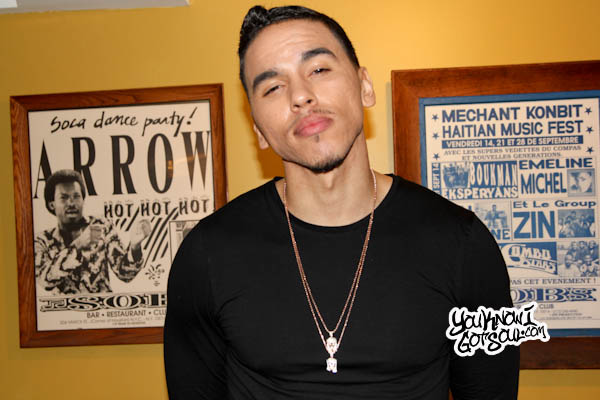 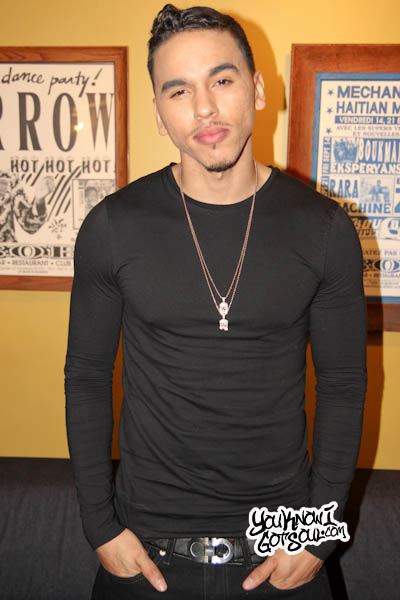 When the legendary Raphael Saadiq tabs an artist as his personal protege, you have no choice but to pay attention. When that artist is Adrian Marcel, you realize he doesn’t need a Saadiq co-sign to catch people’s attention. We couldn’t have been more impressed when we saw Adrian Marcel perform at a recent showcase in NYC. Not only did he possess the live show of a confident professional, but he came off like a humble artist who gets it when we spoke to him back stage. What’s even more impressive is that on his mixtape “7 Days of Weak”, he wasn’t afraid to express his vulnerabilities and admits to being weak from heartbreak. Yep, he’s got the look too. A year from now we could be talking about a household name, but let’s not get ahead of ourselves, for now we’ll just anoint him as one of the rising stars of r&b. YouKnowIGotSoul sat down with him after a recent NYC performance and discussed the importance of his bay area influence, expressing himself on his “7 Days of Weak” mixtape, Raphael Saadiq understanding the younger generation, his upcoming mixtape and debut album, and more.

YouKnowIGotSoul: You’re coming from The Bay area, so what type of influence does that have on your sound?

Adrian Marcel: The influence that Oakland has on my sound is about 90%. There’s so many different elements to Oakland. Of course you have the street elements, but then you also have the culture and there’s so much culture around. It’s a competitive city, it’s full of just great artists and talent. It gave me the confidence, the passion, the realness I try my hardest to portray, so it has had about 90% influence on me.

YouKnowIGotSoul: You were discovered by Raphael Saadiq and of course he’s a legend. How does he relate to your generation of music and how does he understand you as an artist?

Adrian Marcel: Ray is a chameleon. Throughout his years of even his own music and projects, he’s found a way to always be relevant. There’s not a time where you won’t hear a Raphael Saadiq song on a movie, radio or commercial. He’s doing it all and he’s a jack of all trades, he’s such a musical genius. I feel that when you have a passion like that and you are that real, you last throughout the ages and you’re able to reincarnate your artistry numerous times and I think that’s what he continues to do. Even with us connecting, he just understands where I come from. He believes in what I do and he totally supports me and encourages me to be myself. He always tells me to stay the course and hopefully in the time that I spend with him, I can be a chameleon as well and I can have the longevity that he has.

YouKnowIGotSoul: You released the “7 Days of Weak” mixtape earlier this year. How did you come up with the title?

Adrian Marcel: That is because I am so weak over love and heartbreak. My music is rhythm and blues and with that said, the blues element of it is a major portion. I feel like it has been lost in R&B and a lot of people are scared to talk about their vulnerabilities and insecurities. They want to keep it up and in the club. I feel like pain is the quickest way to relate to someone because everybody has been through that and everybody has had a heartbreak. Those are the main topics I talk about, so I’ve been weak over both. I’ve been weak over someone’s love and someone hurting me and my heart being broken. That’s the quickest way to relate to people and I feel the mixtape has done that automatically. So many people have commented me on Twitter, Instagram and always telling me that they’re weak over love and their heartbreak. It lets me know that I’m connecting and that’s really what any artist wants at the end of the day which is to connect with their fans and supporters.

YouKnowIGotSoul: From listening to the mixtape, we can tell how open and honest you’re being. It seems like each song is like a story, is the mixtape everything you’ve been through?

Adrian Marcel: My writer Jane Handcock is like my best friend, she’s my sister. We’ve been rocking for the past 12 years and she’s been there through all my relationships and I don’t want to be false or tell people stories that I haven’t been through because I can’t deliver it. I can’t be passionate about something that I don’t understand. In my music, I feel that’s why people can connect so well with it because it’s all honest. It’s either a story I’ve been through or a story she’s been through and I’ve seen it. I also have a big family with 5 siblings. It’s all entertainment at the end of the day. It’s something I grew up around and I’ve seen. Love and heartbreak is something that’s always been a part of me, so it’s easy to tell these stories because they are honest.

YouKnowIGotSoul: I’ve heard you describe your music as R&B, but with some ratchet, emotion and full of soul. Do you think you have your own lane?

Adrian Marcel: Like I said, the element of Oakland has so many elements to that. It’s the streets and I can’t deny that Oakland has a bad rep, but there’s another side that doesn’t get light shined on it. I have to say that being in the element of the streets, it has given me that edge and just the honesty that I bring to the table. I’m not afraid to have the ratchet side because that’s a part of me too. I like to turn up, I am from Oakland. But at the same time, there’s still a classy side to me that I’ve seen in Oakland as well.

YouKnowIGotSoul: Introduce us to your new mixtape that you have coming.

Adrian Marcel: “Weak After Next” is coming to you top of the year. Please be ready for it! The last mixtape was more of an intro the world and “Weak After Next” is the consistency in a lot of ways to let people know that it wasn’t an accident and it wasn’t something we stumbled upon. This is exactly what we do. We only do music that we feel and love. With this mixtape, it’s more in-depth into the rabbit hole. I want people to learn more about me than what they know. I want them to get a deeper understanding of Adrian Marcel and set them up for the new album.

Adrian Marcel: We have 1500, Justice League, Harmony Samuels, Tank, Drumma Boy, Bangladesh, Rodney Jerkins and a whole bunch of talented people. They respect what I’m doing and it’s refreshing to just be honest and not so made up. I’m able to be me and it translates.

YouKnowIGotSoul: Is your album coming next year as well?

Adrian Marcel: Absolutely. “Seven Days Of Weak” was the intro, “Weak After Next” is the consistency and it’s sad to say that you’re going to have to pay for the third one. It’s going to be worth it. I just want this to be a journey and I just want you to feel like you’ve grown with me rather than me just popping out of nowhere.