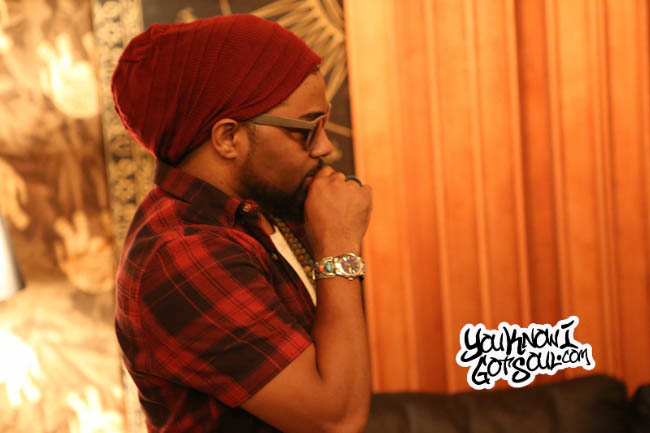 On part three of our weeklong feature segment with Musiq Soulchild’s persona Purple WondaLuv, he discusses the purpose of the artist, and what the future has in store. You really get a good feel for how much meaning this persona has as you listen to him articulate his desire to be different. Listen to him speak on it below!

YouKnowIGotSoul: The really special thing about Purple WondaLuv is that in a day and age when so many artists are trying to make hit and copy radio, we have a real artist in every sense of the word, using their creativity and trying to make what feels good. Is that the essence?

Purple WondaLuv: This is not a money venture, I don’t plan to get rich off of Purple WondaLuv. Don’t get me wrong, I still need to generate a livelihood for myself and loved ones. I still plan on working it. My main goal is not a money mission. I live by the concept of “If the work is good, the money is going to come.” If you have something worth people’s time, then they’ll be willing to engage and invest in it. I don’t want to force anybody to like something that they otherwise would like on their own or they’re naturally not into. I would rather do my homework and find out what else I can do that people do like, and then do my best to live up to that so that it would be something worth their time. I feel like you should earn whatever it is that you get out of life, not run a bunch of game and trick people into it. Then when they get the product, it’s not what you said it was. If you noticed I didn’t really promote it or say a lot about it. I wanted people who were looking for something like this to find it. There is an argument that can be made that people won’t find it, but the universe works in very mysterious ways. Things have a way of getting to where they need to get to, how they need to get there. I don’t like to allow myself to believe that I’m in any form of control over any of that. I just do the work and put it out and all I can do is pray it reaches the people that can really use it. This is no diss, but I’m not chasing radio or approval. It’s like an apple. When an apple doesn’t care whether you like it or not, or approve of it, it still serves its purpose.

YouKnowIGotSoul: What’s the future of Purple WondaLuv. Do you have a full length album coming?

Purple WondaLuv: Yea I have a full album that I’m going to work on. I haven’t started working on it yet. I’m going to be working on it really soon. I don’t want people to think that this is the extent to my intentions with this persona. This is literally the beginning. I like to do with this persona project that I’m working on, I want all of you guys to be in on it from the beginning. I don’t have it all figured it, but I don’t have to, because I know what I want to do and accomplish and put out there. Now it’s just a matter of figuring it out. I feel like it will be more authentic that way as opposed to trying to get a whole big game plan. Even the situation with you and this; I didn’t plan this, but it was an idea that came around and I was like “Let’s not just do it, let’s do it!” Then the show, I didn’t plan on calling you for that, but it was presented to me, and I was like “Yea, let’s do that as well”. When you leave yourself open that way, you’re more willing to take advantage of your opportunities rather than having just a strict mindset “It has to happen!” I don’t know how this is going to work out, I just know what I would like for it to be and I’ll keep contributing to that. I’d love for people to love the project. I don’t know if people want to care about it, but I know it’s necessary; I feel it and see it. I’m looking for stuff like this and there isn’t too much of it out there. Whatever it is that I can do to inspire that in people, so be it. I don’t want to make it seem like everybody has to listen to me and follow my point of view on it. I’m just doing whatever I can to contribute to an alternative to what people are digging on. That’s a huge issue that we as creative people are facing right now; everybody is chasing these trends. Not to take anything away from people who inspire those trends, because that is a form of creativity, there is levels to this. There are legacies and traditions that should be honored and I don’t think they’re being respected. Instead of complaining about it, do something about. This is my way of doing something about it.