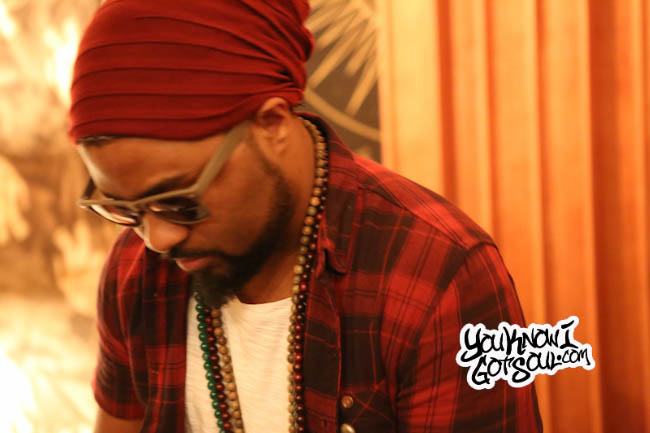 The second segment in the week long feature has Purple WondaLuv introducing his debut project the “Eternal Peace” EP. The seven song set features a soulful vibe with very positive and uplifting lyrics. Listen to him describe it below.

YouKnowIGotSoul: The thing that really stands out about the “Eternal Peace” EP is the positivity in the lyrics and how inspirational it is. What was your outlook going into this project?

Purple WondaLuv: I just feel like in our culture, there are so many songs about romance. Everybody wants to sing a love song, and that’s fine, it’s cool. I feel like there is more to the world to talk about than just who you’re dating right now and what’s going on in your love life. There is a lot of information in that which can be used in how it pertains to people looking to know what to do in a relationship by listening to someone else’s timeline. I get that, it’s cool. Sometimes you just want to put something on to put you in the mood, I get that as well. Let’s talk about something else every now and again. That was the initial mindset that I created out of for the Purple WondaLuv project. This EP is not the full length album. That’s going to come later when I actually spend time. This is something that I actually did in the span of a month and change just to present the idea to you guys. So when I do a show I actually have original material. I started out with this persona a couple of years ago but I didn’t have any original material. Now I came out with this persona, and I didn’t want to do it by doing other people’s music. I wanted to make my own music. It came surprisingly easy. I was actually impressed by myself, no ego, but I was impressed that I came up with all of this stuff as quickly as I did. All that did was show me that I needed to get it out. What got me through the project was doing the project. I’m saying that to say that it was a whole lot of stuff going on at the time in my life, and it was the thing that helped me get through it. I know because it was made out of that, with that vibe and those intentions, I know that it’s going to help somebody else, because it helped me.

YouKnowIGotSoul: Talk about the EP sonically.

Purple WondaLuv: I started out wanting to be real small, minimalistic. I didn’t want to do too much. What I tend to do sometimes. With this one, I wanted it to be simple. I didn’t want to make it about singing. That’s why I’m not doing a whole lot of runs. That’s not what this is about for me. I wanted it to be about the song and what the song was saying and how you can apply the song to your life. A lot like how folk music is. It’s not really about your singing ability. If you happen to have a nice voice and great melodies, that people like, then cool. It’s really about the message and I wanted people to focus more so on the message than listening to somebody trying to show how great they can sing. I wanted it to be about the music in the sense that it’s about the artistry, not about me, the artist. I drew a lot of inspiration from Bob Marley and Sade, which is sort of the foundation of the Purple WondaLuv sound. There are other elements as well, just reflexes from stuff that I’ve listened to my whole life that come out that I feel fits this vibe. Ultimately, I’m always looking to pay my respects to how I was inspired by Bob Marley and Sade. When I think about Purlple WondaLuv and what I’m attempting to do, those are the artists and how I was effected by their artistry and presentation of music. That’s how I feel, the same vibe that I get. I want to give that to people. There are a lot of people that I think know who Sade is and Bob Marley is, and they know the feeling. I don’t know how to put it into words. The only way I know how to articulate it is by doing it. It’s not that I’m trying to be them or copy them, I’m trying to keep the legacy alive in my own way.