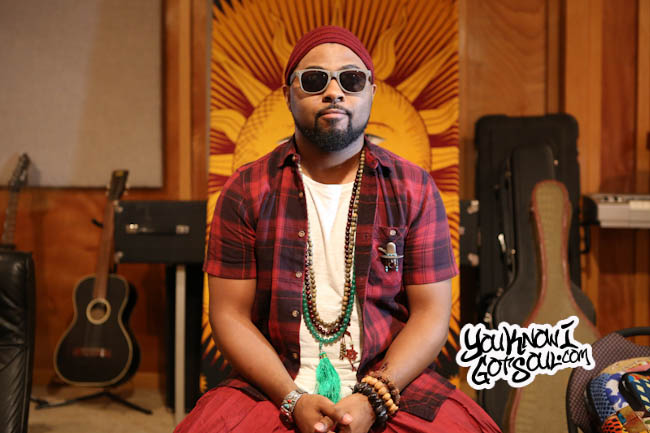 The first segment in the feature is an introduction who Purple WondaLuv is as an artist, including his name and image. Listen to him explain it extensively below.

YouKnowIGotSoul: Purple WondaLuv is a unique name. Where did that originate?

Purple WondaLuv: *Laughs* As everything does, I just get an idea in my head and I think it’s cool and I just go with it. Purple is actually my favorite color. To me, it represents a balance so to speak; two primary colors coming together to make this royal, majestic, unique color. That’s pretty much it. There’s no any other thing. I just like the color because I thought it was a little out of the usual, commonly used colors. Not everybody picks purple. I’m always looking for that element out of life, the unbeaten path, the not so used. Not because it’s not good or people don’t like it, but not everyone knows how to use it and apply it. You’ve actually got to put some thought into incorporating it. To me it’s just a color, but everyone has their own point of view of what’s normal. Growing up, purple wasn’t necessarily a normal color. Naturally I gravitated towards it. WondaLuv, it’s a name I kinda messed around with for awhile. It stems from my timeline of being inspired Stevie Wonder and always being ad advocate for love. I just said it one day, and I was like “That’s actually a really cool word.” When it came time to make a name for this persona, I messed around with finding the most obscure name I could come up with. I kept coming back to Purple. And one day I just said Purple WondaLuv. I don’t really put too much thought behind it. Even though I don’t put too much behind it, it’s not that it doesn’t come from somewhere. It’s such a long process and a lot of little details that I subconsciously put together in my head and it comes out.

YouKnowIGotSoul: Would you say your style came about in the same way?

Purple WondaLuv: Yea. The style is basically a hodge podge of things that I associate with being cultural and being worldly. Anything that is attached to the concept of the promotion of peace and love, that’s pretty much where this style comes from. I gravitate towards those types of elements. It could be from, I dunno, different cultures like Rasta, then you have Buddhism, Taoism, Hindi, even Christianity and Islam. There are a lot of different elements about all of these walks of life and cultures that promote the concept of peace and love. I just take that elements and adopt it into my own expression. It’s not that I’m presenting myself as either of these things, at least not authentically, I just don’t think it’s cool to call yourself something because you want to be associated with it. What I’m doing is re-purposing how I’m being inspired by that culture in a very creative way, to give back and show respect to that concept of thinking. Let’s all band together as human beings and do what we can do to be better people to each other.

YouKnowIGotSoul: Another unique element you have is the lettering you use in your name. Explain that.

Purple WondaLuv: That was just something fun to do. I think people read way too much into it. I just thought it was creative. I’m always looking for things to set how I present myself and what I do, apart from the norm. Just so that it can catch your attention just for a little bit. It’s not intended to be read into too much. It’s just to show it’s not like everything else.

YouKnowIGotSoul: Your project is called “The Eternal Peace” EP.

Purple WondaLuv: That’s actually a play on words, Eternal Peace, EP. That’s what I mean, I like to do little things like that. They’re not deep and not meant to be taken so deep. I just feel like it’s like brain candy. Something to catch your eye. I’m always thinking creatively and I’m a creative person. Every thing that I do, I’m going to be creative with it.