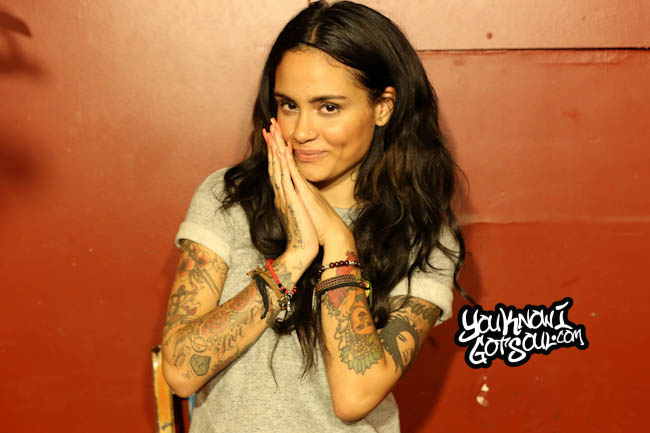 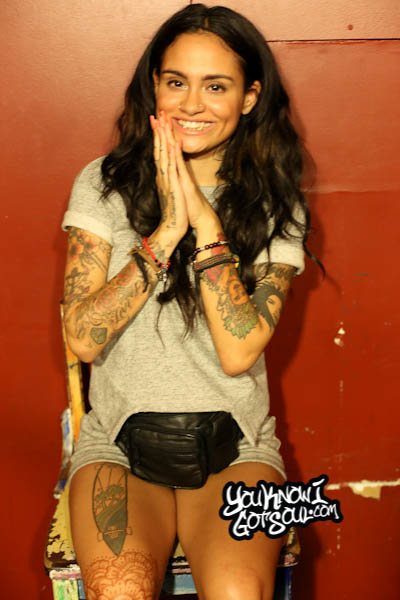 Every once in awhile we’ll come across a new artist who we’re completely blown away by, and Kehlani falls into that category. Upon listening to her “Cloud 19” mixtape, you can tell her sound is primarily influenced by the late 90’s and early 00’s of r&b, but she also puts her own fresh spin on it. She’s just 19, and with so many artists her age chasing the sounds of radio, how refreshing is it to find an authentic artist who appreciates the art form. Kehlani linked up with Nick Cannon after competing on America’s Got Talent, so with him in her corner as a manager, the odds are in her favor. YouKnowIGotSoul sat down with Kehlani after a recent performance in NYC and discussed her origins as an artist, linking up with Nick Cannon, the release of her “Cloud 19” mixtape, keeping her music authentic, and much more.

YouKnowIGotSoul: How has being from the bay influenced your sound?

Kehlani: Being from the bay area has influenced my sound because the bay area is kind of like its own sound. We’ve got a mixture of many things; you’ve got your hood, your rich part, your little Mexico, little China Town, all mixed together. Although there are all of those separate parts, it’s not segregated. It’s a big melting pot of inspiration.

YouKnowIGotSoul: So at 16 you were on America’s Got Talent which was a huge platform to be on. Tell me how you grew as an artist from that experience.

Kehlani: I was in a cover band and we never made our own music, we were just performing. After the band broke up, it was like well, I have all of this talent and experience with performing, but now I can’t just do cover for the rest of my life, so I started making my own stuff. I went into the studio and starting working on my own stuff. I had my mentor Nick Cannon and we got together and started forming what is my sound and my new music.

YouKnowIGotSoul: So you were on his show, that’s how you connected with him?

Kehlani: Yea, he waited two years to contact me. We were like “Oh My God that’s Nick Cannon!” Then two years later I got a call and my Aunt was like “Sit down, you’re going to need to breathe for this. Nick Cannon called for you, he wants you to come do something!” So I came down there and he was ready to get to work and now he’s like a father figure to me.

YouKnowIGotSoul: So he sat in the studio and helped create your sound?

Kehlani: He was the first person to really believe in me after the band split up. It’s not as though he sat and helped me specifically create it, but he helped me get to the place I needed to be like meeting my producer, and if I needed to come New York to work with a producer then that’s what it was. If I needed a safe place to record or rest my head, he took care of that.

YouKnowIGotSoul: The music you make is super aware, it’s amazing. The way that you write and a lot of the r&b right now is just scratching the surface, but you really get into these conversations about love and people can feel it as if they’re in that moment. Can you talk about the writing process and how you’re able to actually connect those real life emotions to your music?

Kehlani: I’m finding that right now a lot of people are compromising the sound that they first initiated as theirs. When people first started singing I don’t believe the first songs they come out with are radio records. I feel like I just never compromise and stay true to what I believe in. When I first started making music, I was getting reactions like “This is way too old for you, young people can’t listen to this, we can never put this on the radio, you can’t sell records!” I’m thinking somebody is going to like it and somebody is going to buy it. If you like it you like it, if you don’t, you don’t. My writing process is like, I’m not really a metaphorical type person, but I always respect and really adore that type of music because I haven’t learned how to do it yet, but I’m literal and like telling stories. I was really good at telling stories in middle school, I always got English awards for writing short stories. When I turned to music, I thought I could literally word for word tell a story that I know for a fact young girls in the world are going through right now that they will be able relate to more if I tell it from my perspective because they’ll feel like they’re in my shoes. I try to stay really positive and offer a voice that isn’t offered right now in the industry. I feel there are a lot of the same types of females. There are a lot of females that not every female can relate to. I don’t wake up and be this bad ass bitch who twerks and gets all this money and throws it in strip clubs! I’m more of like “Hey, I’m honestly here and I’m where I’m at. I’m upcoming and still from where I’m from. I’m honest and genuine”. I’m not at the club throwing bands. I’m in the studio or chillin with my friends. I want to give that perspective because how many people can you walk up to on the side of the street and ask “Hey, did you go throw bands today?” I try to make it relatable.

YouKnowIGotSoul: That real life comes out in your music and I feel like everything you sing is real. On the record, you have two songs in particular produced by Jahan Sweet, “Get Away” and “How We Do This”. They sample the 90’s r&b records. Has that 90’s period been influential in terms of you making music?

Kehlani: Yea I was in a moment for a second where you could ask me something on the radio and I had absolutely no idea because I’m so old school, you can tell! I’m very, very much stuck in early 2000’s and before that. I’m just now getting to listening to the radio and what’s current and keeping up with who’s around me because now I’m in this lane. Before that growing up, my auntie was just this woman who bought CD’s and played them out until we knew every word and the CD broke. She only listened to Neo-Soul and R&B. When I found Jahan, it was very much by accident. I went to work with another person at the studio and they brought up the beat, I didn’t know whose beat it was, we made “Get Away”. I got back to California and I’m like “Yo, ‘Get Away’ is like my favorite song I ever made in my life!” So I told Jahan he had to do more for me. Making “Till the Morning” was the first time we ever made music in the same room, which was two weeks ago in New York. Before that it was sending stuff back and forth and face timing each other every day. He’s become like my family, he’s my brother. I will probably beat people up for him! Everybody that is in my artistic squad is my actual squad. My backup dancers live with me; they are my little sisters. We get up every day and dance until we fall asleep.

YouKnowIGotSoul: When people first see you, you definitely have your own look, you don’t fit into the mold of the typical r&b female who you can put into a box. I do feel like you are a self aware person, you know this. What do you have to say to up and coming people who may look at you and judge you?

Kehlani: It’s simple, just do you. It’s always been what it is because from the day when I first got my first tattoo, it’s always been “Well how are you going to do this now?” Then I get a face tat and they’re like “Well what if you want a makeup sponsor?” and I say “If they fuck with me, they fuck with me. If they don’t they don’t.” I’m not here to impress people based on what I look like. If anything I’d put out music all day and never show my face. I’d rather you fuck with me off of the strength of my sound and my art rather than what I look like. Tattoos are just self expression, everybody wears their art differently. I get all the time “You must be a gangsta rapper”. That’s the beauty of it all. That’s what I find cool about myself, you won’t expect what comes out of my mouth to come out of my mouth.

YouKnowIGotSoul: That’s something we’ve got away from in music, getting away from the image and listening to what the person is saying. We should be able to connect to that.

Kehlani: It’s sad because I know so many dope artists who are so focused on what’s coming out of their mouth. I even know so many dope artists, just knowing how shady the industry is, and they’re not attractive enough or they don’t have enough sex appeal. They’re way doper than anything going on right and it makes me sad. My philosophy in life is authenticity and genuinely good shit will always rock. If you’re making good shit and you love what you’re doing and everyone around you loves what you’re doing and you’re proud of what you’re doing, keep doing it. Fuck what anyone thinks and what they say about what you look like. I went through many phases of what I look like and I’m always the same on the inside.

YouKnowIGotSoul: Tell us what you’ve got coming next.

Kehlani: I want to run out some visuals that I actually want to work on directing myself. I’m going to work on doing a bunch of shit for myself. I’m going to work on a new project. I would like to drop another mixtape and then eventually an album. I want to do more shows and get to know more people and just keep growing an expanding and loving an inspiring and keep making music. That’s really all I’m for. I don’t have an immediate goal. I just want to keep making music and keep influencing people.

Kehlani: Keep up with me on my social networks @KehlaniMusic. I always interact with fans. I love you guys, you are awesome. Thank you for the support.