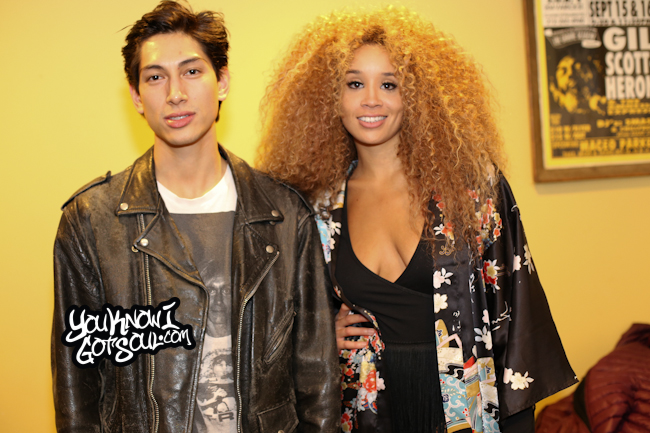 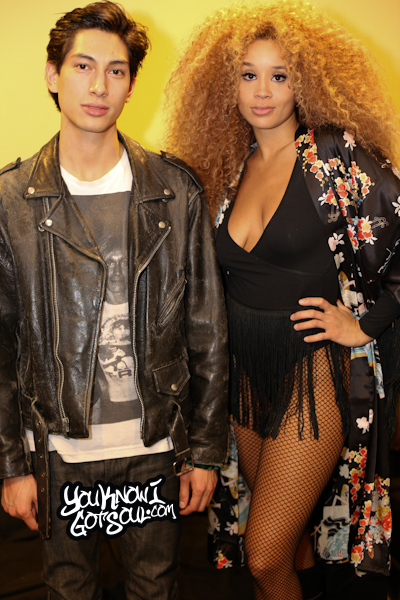 Every so often in music you’ll come across an undeniable artist or group that makes you drop everything you’re doing an pay attention. Lion Babe is one of those special groups. They’ve been on this journey for a few years now, doing shows and signed in the UK, but they’ve really started getting the recognition they deserve after signing with Interscope here in the U.S. You can’t quite put a label on their fresh, unique sound; you just know it’s like nothing you’ve heard in awhile. When the duo performed at our Sol Village showcase last week, it just solidified the fact that we think they will be stars. So get on board early. YouKnowIGotSoul sat down with Lion Babe after their performance here in NYC and discussed their journey as artists, what influences their unique sound, how they got signed, what’s next, and more.

YouKnowIGotSoul: A lot of music fans are being introduced you to recently for the first time, but you guys have been at this for years. Talk about the journey to this point.

Lion Babe (Jillian): We’ve definitely been grinding. The journey has been very exciting and interesting. We kinda started out doing this for fun and as it turns out we just had a great amount of success and interest from the industry and fans. It was kind of an awesome opportunity to just really take the reins and make something. It’s great because we’re both very creative and for me, I kinda come from the performing artist side, and he always wanted to make beats and be a producer. So it’s a happy partnership. We’ve of course pushed each other since then and now it’s been exciting and it’s really cool to just see your life change and now we’re Lion Babe.

Lion Babe (Lucas): It’s been really good, ever since we did the first song “Treat me Like Fire”, we just wanted to get together and make something we thought was cool. Then we shared it and it expanded to all of this, it’s been awesome. Making more music this past year has been really cool. Just the whole growth of where we’re going.

YouKnowIGotSoul: It’s been awesome all of the exposure you guys have received lately and seeing people’s reactions as they discover you for the first time. What’s the response you’ve been hearing to your unique sound?

Lion Babe (Lucas): I think a lot of our fans that we’ve met so far, we definitely feel for them and they really get what we’re trying to do as far as our influences and time periods of music we’re pulling from. We do it because we wish it was out there in the world and I think our fans appreciate that and get it.

Lion Babe (Jillian): I agree. I like the idea of people not being able to place us as a genre because that was never really our goal. Being from New York, we’re super eclectic. You have this universal landscape. You can have someone who is old and listens to jazz and likes it, or a die hard hip hop fan, or an indie rock Brooklyn kid. It’s cool to just have all of those people because I think both of us have those people in our lives. We’re trying to make sure everyone can be into it.

YouKnowIGotSoul: Talk about some of the artists who’ve influenced your sound over the years.

Lion Babe (Lucas): It’s so many. For me as a producer just making beats, J Dilla, Wu Tang, Flying Lotus, DJ Premier. For me, I was brought up on MTV as well as The Neptunes, Timbaland, The White Stripes, The Strokes. Our parents brought us up on The Beatles, Hendrix, The Rolling Stones, Curtis Mayfield, Sly Stone. There’s so many you can’t even name them all.

Lion Babe (Jillian): I’m on the same page. It’s a combination of old jazz influences that my parents kind of showed me when I was younger, like Billie Holiday and Frank Sinatra and stuff. I love beautiful harmonies. But also the soul artists from the 60’s and 70’s. Just the songs in general, they were usually pretty simple and bold. They resonate with you and you can listen at any time. They are never out of context. The goal for me as a song writer is to make timeless music that can work in any genre or age.

YouKnowIGotSoul: Talk about the creative process between you guys and how you collaborate so well.

YouKnowIGotSoul: How did you get discovered by Interscope and signed with them?

Lion Babe (Lucas): Originally, we were first signed on the UK side only, and now we’re coming out on the U.S. side. Basically, we put the song out towards the end of 2012, by the following June, we had been getting e-mails, and we went out to London in the studio and that’s where we made “Jungle Lady” within the first couple of hours of being there. It just went from there. We decided to go for it and we just did it full time.

Lion Babe (Jillian): It was kinda like as a college graduate who’s like “What am I doing?” *Laughs* When you get an opportunity to make some kind of money and be creative, you gotta take it.

YouKnowIGotSoul: You guys have got the EP out, I heard you guys were working with Pharrell, what’s coming next?

Lion Babe (Jillian): Just more of everything. We’re so excited to have done a show in New York tonight and be performing again. That’s kind of the reason we started Lion Babe, so write some songs and reach out to booking agents and play stuff for fun. It’s awesome to just create new visuals and new songs. We’ve worked with Pharrell, it was an amazing honor to work with him. So many producers that have come in have taught us so much. This year will be a lot busier and a lot of growth and a lot more exposure and connecting with amazing artists and people.