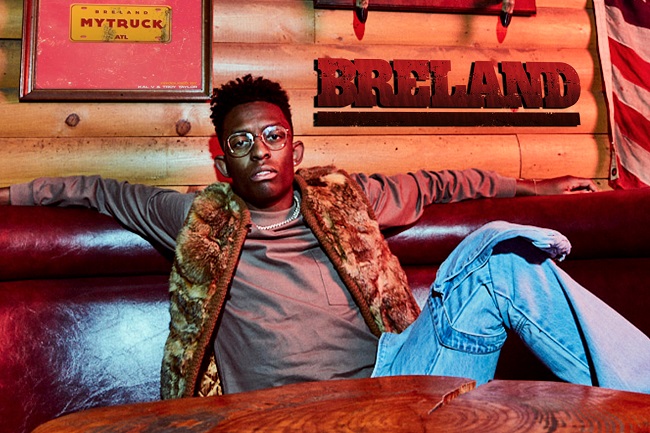 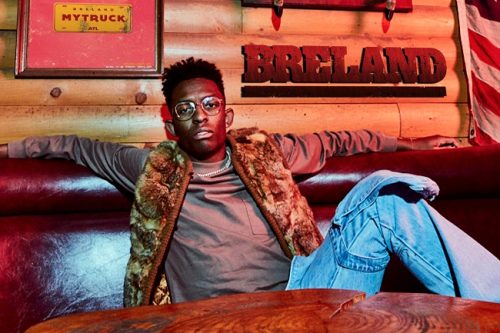 Nothing is more exciting than listening to artists who are in their own lane. That’s exactly what Breland is. The singer/songwriter started off his career working writing with legendary producer Troy Taylor for the likes of Trey Songz and Jacquees, but experienced a viral moment with his single “My Truck” that has launched the start of his career as an artist. We had a chance to talk to Breland about the success of “My Truck”, the fusion sound that he’s created as well as his latest single “Cross Country”. We also talk about his work on the most recent Trey Songz album “Back Home”.

YouKnowIGotSoul: We were originally introduced to you through your work with Troy Taylor on the Dru Hill Christmas project back in 2017. At that time, we knew you as The Pen Point Guard because of your writing behind the scenes. When “My Truck” went viral, we were surprised to find out that it was your song because we only knew your work in R&B. Talk about your journey since the Dru Hill project.

Breland: That Dru Hill project was actually the first set of records that I had come out with artists that people knew. I was just working with independent artists that were just starting out in very similar positions as myself at the time. That was my first time getting someone to perform a song of mine on TV and for it to be a group that people could say “I’ve heard of them!”, it was really exciting. The Pen Point Guard was a moniker that we came up with because I’m a big fan of basketball and I just feel like the energy that I bring creatively is one of a point guard. A point guard is someone who brings the ball up the court, facilitates the offence and recognizes the different skills and talents of the other people on the team. When the lane is open though, a great point guard knows how to drive the ball and score. I feel like “My Truck” was my opportunity to do that. I was able to write for YK Osiris, Trey Songz, Jacquees and Trevor Jackson. It was great to be able to get that experience, but where I’m at right now creatively, I’m always going to make R&B music because it’s in my arsenal. I’m always going to bring soul to whatever I do, but as an artist I’ve found a new niche where I can express some other parts of my creativity and reach across the aisle. I can experiment with genre and sound in ways that have been really satisfying for me.

YouKnowIGotSoul: Take me back to those early days with Troy Taylor when you grinding in the studio. Were you thinking about being an artist at that time or were you just content with being a writer?

Breland: I was pretty content with being a writer at the time. It just seemed like that was where the opportunities were coming for me. I figured when it was a time to make the shift to being an artist, if there was ever going to be a time to make that shift, then I would know when it felt like the right moment. I definitely got a lot of songs done in Atlanta. In my new single “Cross Country”, I say “Went to ATL/Where the nights are long/With a thousand songs that would never sell”. Every songwriter understands that part of the grind where you don’t know if anything is going to happen for you, you’re just trying to figure it out. It was dope for me to get those years under my belt because I was able to understand the value of hard work, discipline and consistency. One of the biggest things in life is that I never wanted to achieve any success too early. The success that I’m experiencing right now as an artist on a major label, having a platinum single and being able to put out music and tell my story in the way I’ve been doing, all of this is appropriate for me right now. It wouldn’t have worked in college or in high school when I first started because I wasn’t ready as a man. Right now I’m a lot more ready than I was at the time and part of that maturation process really came about in those years in Atlanta trying to figure out.

YouKnowIGotSoul: We hear so many different sounds in your music. At what point did you realize that you were able to fuse everything together? A couple of years ago, R&B was strictly R&B with maybe some Hip Hop influences, but today it’s all a melting pot.

Breland: From like a cuisine aspect, you put in a bunch of ingredients in Italian dishes that will pair together but a lot of Asian cuisine, they’re putting together things in the flavor palette that you wouldn’t expect. You might have something sweet, savory and salty all in the same dish. I feel like musically, that’s what I’m trying to bring to the songs I’m writing. You probably wouldn’t expect me to put a banjo on a song and then do the runs, but it’s that exact fusion of sounds that makes the recipe so appetizing to the people that have been vibing with the stuff that I’m dropping. I love not having a box and I love knowing that I can play around with sound and genre because ultimately people listen to music a lot differently than they used to. The same person that can be vibing to Jazmine Sullivan or Lucky Daye is probably also listening to Lil Baby and Ariana Grande. For me to be somebody that appreciates good vocals and songwriting across different genres, my music is very rewarding for me creatively.

YouKnowIGotSoul: Was “My Truck” the first song that you tried fusing genres or or were there other songs that you had before that?

Breland: I had written a few years that I could have considered folk/country songs. I don’t think an acoustic ballad has a genre on it, it’s right down the middle of genre and I’ve written a lot of songs like that, but in terms of intentionally trying to fuse the different genres, “My Truck” was definitely my first time giving that a shot. The fact that we got a product that people like so much was really satisfying.

YouKnowIGotSoul: You’re allowed to create whatever you want right now and no one can tell you that it’s wrong. It’s a beautiful thing that you’re in your own lane right now.

Breland: That’s the whole point of the song “Cross Country” and the movement that I’m on right now. I even say in the song that I don’t have to prove them wrong because it’s okay to be in my own lane and do things that have never been done. That’s how I feel right now creatively. There’s a lane for cross genre collaboration and I bring all of the sessions that I’ve had in Atlanta and LA to Nashville. When I eventually go on tour, hopefully people will be able to feel all of the influences from the cities that I mentioned on the song.

YouKnowIGotSoul: Did you have a game plan after “My Truck” blew up? It’s in a Chevrolet commercial now!

Breland: I had no real intention of that song blowing up. It was great for it to do that and I felt it was special which is why I put it out. There’s never any guarantee that a song will go viral or blow up especially when you put it out independently as a debut single. I literally posted about it on Instagram twice and called it a day. I didn’t have a whole campaign behind it, but people who drive trucks saw it as an anthem for them. They started making videos showing off their trucks. It was a natural collaboration with Chevrolet at this point for them to launch their Tik Tok and I’m excited to have people enjoy the song in a new light. In terms of me trying to find a follow up, there was definitely a bit of a scramble at first. I put that song out for fun because I had to be like “I’m an artist and there are people that are viewing me as one”. I needed to make songs for myself too because before that point, I wasn’t doing that. There was a little bit of pressure at first to make something else that sounded like that and I’m grateful I didn’t stick in that one little lane. There’s a much bigger conversation to be had with “Cross Country” which is the catch all genre that incorporates country into the other genres of music, so “My Truck” falls under that umbrella but I think songs like “WiFi”, “Hot Sauce”, “In The Woulds” and “Real Men Don’t Cry” also fall within that umbrella. Everything that I make will be at least somewhat “Cross Country” because I’m a story teller and I want to make sure my music has some sort of message to it. This song “Cross Country” is really important to me. I hope it has similar success to “My Truck” but I’m really focused on being able to tell my story on this and inspire other people to tell their stories because that’s what country music is about. It’s about story telling and there’s a lot of stories that still need to be told.

YouKnowIGotSoul: You wrote a lot of Trey Songz’s latest album “Back Home”. Who came up with the concept “Cats Got My Tongue”? That song is hilarious.

Breland: That was one of my concepts. *Laughs* I have to say sorry to my parents for that one. That song is a little raunchy. It felt like something Trey would sing given his history musically and some of the things he’s gotten away with saying on record. It’s a cheeky song and it’s clever. It’s a lot of double entendres and wordplay on that. I came up with that concept and I sent it to Trey. I was really honored that Trey wanted to work on it with me. He has such a way of finding talent early. The first time we worked, we came up with three of the songs on the album. We did “Lost and Found”, “Save It” and one of the other songs from the album that night. The vibes were so high. Everytime I saw him after that, he was like “We need to get more songs for this album”. Once the quarantine began, he told me he needed a couple more songs. We would hope on Facetime and get that stuff done. I would consider Trey to be a big brother to me. I’m really honored to great some timeless with him and he’s been supportive even with my own artistry. Obviously he’s on Atlantic Records as well so we’re labelmates now. He helped me make that decision to choose Atlantic because I had some offers from different labels. I was able to have that conversation with him as one of my OGs. He told me Atlantic would be a good fit, so I’m really grateful to him and really excited to have so much great music with him. Anytime I’m working on a project or a song with an artist, I want to make sure it’s authentic to them and it’s something they’ll want to use. Anytime I’m working with Trey, I always ask what’s going on in his life and we try to chase that vibe.