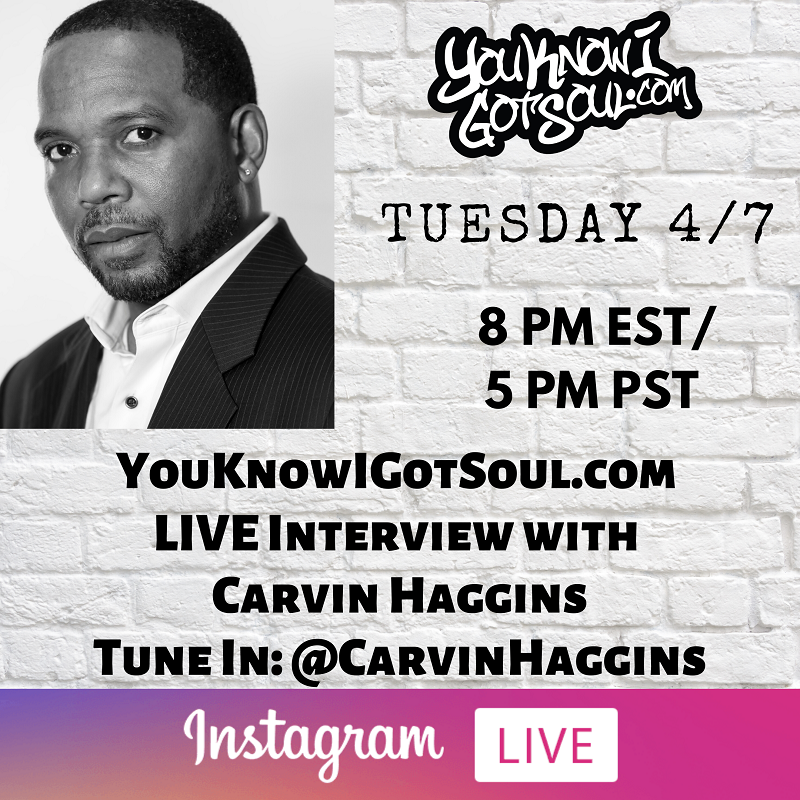 Songwriter/Producer Carvin Haggins joined us recently on Instagram Live for an exclusive interview. During our conversation, we discussed the impact he had in helping to introduce Musiq Soulchild and creating his debut album “Aijuswanaseing”. We also discussed his new artist Deja Blue, his upcoming project “In the Key of Love”, the process behind creating some of his biggest hits, and much more.

YouKnowIGotSoul: Tell us about the new artist Deja Blue who you have out.

Carvin Haggins: Deja Blue is from Philly. An unknown fact is she is the daughter of Troy Corbin who used to be the background singer of Musiq Soulchild. He’s a childhood friend of mine that years ago, his daughter found me online and brought him to the studio and reconnected us. When she did, I connected him with being a background singer for Musiq. He toured with Musiq for his first and second album and part of the third. The new project is out. It’s called “Blue Waves” and really is just the introduction of Deja Blue. About a year and a half ago we dropped “Color You” to give everyone a taste of what she does. We waited until we put together this project. It’s a great project. The girl is phenomenal, great vocal range, feeling, timing. And her pen is sharp too. We have about 100 songs. We are dropping the EP and then drop another one. Just flood the market a bit.

YouKnowIGotSoul: Take us back to the whole A Touch of Jazz era of Philly R&B music. When you were there creating with artists like Musiq Soulchild, Jill Scott, Floetry and more, did you realize how big it was?

Carvin Haggins: You never know you are making history when you are making history. I think what we knew was that we were on the doorstep of greatness. We knew what we were doing was different. The whole mindset and idea of a Musiq Soulchild was again, it was something that was not there at the time Musiq came. There was the R&B talking about stars and quasars and fantasy type life. My goal with the Musiq Soulchild project was to make it more real. Let’s talk about what we look at everyday and what we see. The creation of the idea of Musiq Soulchild was the intelligent hoodlum. There are a lot of cats that roll with thugs who are really smart and well educated but they live in the neighborhood where there are thugs. There is always that one guy in the middle of the crowd. The only thing closest thing to it that we had was D’Angelo. The great thing about D’Angelo for us was that he was so much of a musician that in his creation, he went too artistic and not enough street. I was a rapper at the time, so all I had to do was have a vocalist have it sung in the way I wanted it said.

YouKnowIGotSoul: Talk about the creation of “Sunny (Just Friends)” which was the first single from Musiq Soulchild.

Carvin Haggins: The creation of that record was something different too. My partner Ivan wasn’t landing any projects. I told him I’d get him a single. All of the rest of us were there everyday and he was working from Atlantic City. He’d come into Philly every weekend and stay from Friday to Sunday. Everybody else was there all week long. I told him to give me his beat tape. He gave me it and gave Musiq a copy of it. One day Musiq came in with the “Just Friends” beat. He sang a song to it, and I told him the song was trash! But the flow was dope. I wanted to see if we could flip it and make sense. So we re-wrote it and it made sense.

YouKnowIGotSoul: Talk about the creativity in the lyrics of Musiq’s debut album “Aijuswanaseing”.

Carvin Haggins: That first album was a lot of my production as well. It wasn’t until we moved into the second album, that Ivan kind of picked up most of the production. That whole idea of the first album was my brainchild. Every record that’s on there that I had something to do with all came from an idea or concept that I thought would be great. “143” came from a conversation with an ex girlfriend of mine. She used to page me “143” back when we had pagers. I had to ask her what that meant. So I wrote a record about it. Me and Musiq were in the studio one day and we wrote it out. We got Keith Pelzer to come in and work the track around what we were writing. “Paparazzi” is one of my favorite records that’s highly slept on. When we created, Musiq’s management team at the time, Mama’s Boys, said “Yo, the song doesn’t say Paparazzi in it!” And I said “Well “Just Friends” doesn’t say “Sunny” in it!” But it’s the concept, “Picture Me”, that’s what paparazzi do. That’s why the song is called that.

YouKnowIGotSoul: Some people thought “Love” was a religious song.

Carvin Haggins: That song was created simply because we were in the studio working and at the time Andre Harris was in there and I was working behind the mixing board. Musiq came in and was like “Yo man, I want to make a sex record!” I said “Nahhhh, you aint sexy though!” I said we can do something better than that. I said we should make a love record. We started working on the record. I said we should have a conversation with emotion and have a conversation with Love. That record manifested from there. In hindsight, when you look back, you realize that God is Love and Love is God. It is a spiritual record, but I didn’t know at the time.

YouKnowIGotSoul: After you did that Musiq Soulchild album, did you get a lot of attention and other artists coming to you for a similar sound?

Carvin Haggins: Actually what’s funny is a lot of people started to come for the sound. Believe it or not, they came to us about the Michael Jackson “Butterflies” record and also wanted a record like “Just Friends”. Me and Ivan didn’t want to do it. At the time, Jazzy Jeff was pushing Dre and Vidal as the face of A Touch of Jazz Studios, so they put them on that record. Marsha and Dre came up with that record. If you listen to “Just Friends” and “Butterflies”, it’s the same structure. Me and Ivan just wouldn’t do it because of the fact we didn’t want to chop off our hand. If we gave everyone Musiq Soulchild’s sound, what makes him different?

YouKnowIGotSoul: Are there any songs you felt could have been singles that you produced?

YouKnowIGotSoul: You did some work on Jill Scott’s first album. Did you know she was going to be a star?

Carvin Haggins: Jill Scott is a star. She is full fledged. We knew exactly for a fact that she was going to be everything that she is and everything that she is now. Her persona was huge and watching her come into the studio and just be humble and willing to be there as well as coming with her book of poetry. She was just open for creativity and suggestion and ideas. You kinda knew.

YouKnowIGotSoul: Talk about your work on Faith Evans “The First Lady” album.

Carvin Haggins: I’ll tell you what. Now that you brought that up, “Stop N Go”, that should have been a single. If that record came out, that would have killed the game! That session was incredible. We went there for four days and we did fourteen records in four days. We did seven records in four days, and we stayed another two days and did fourteen records in total. The way we were creating was it was all happening in the same room. The studio had the booth, the mixing board, and the other board behind. On the island behind me, Ivan had a whole production set up. While we were cutting vocals, Ivan was making the beat. As soon as he we would finish, we would listen to it, move it over to pro tools, and start writing and cutting to it. Then he’d start creating another beat. It was like that type of assembly line. I’ve got say to, Faith Evans is definitely one of the greats.

YouKnowIGotSoul: “Stop N Go” is just such a great example of your creativity. How do you come up with these creative songs?

Carvin Haggins: I can’t say there is a process. It’s like once the track is created, the words kind of just appear. I try to make sure I’m not drug induced or alcohol induced. I try to make sure I’m in tune with what God is whispering while the music is playing. Words will come to me. When I’m listening, the words will start falling. I don’t use a pen, it slows me up. I just listen and let the words fall into place and before you know it we have a song going.

YouKnowIGotSoul: What do you have coming up that you’ve been working on?

Carvin Haggins: I’m releasing “In the Key of Love”. On my 50th birthday I wanted to release a project on December 10th, but it didn’t work out the way I needed it to go. And everything is on God’s timing. But it got delayed. With it being delayed, we ran across a record that Musiq and I wrote 25 years ago that was an incredible record. We just went back in and remixed it and made it sound like it needed to sound. It will be on the project. It’s called “Carvin Haggins presents… In the Key of Love”. It will be records that I’ve written and reintroducing love back into the system. It’s every complexion and face of love. I just put my pen to the pad and penned and co-wrote with a lot of artists. It’s going to be a really interesting project. It’s just feel good R&B.

YouKnowIGotSoul: Of the hit songs you’ve written over the years, which was the hardest song for you to write?

Carvin Haggins: It’s never challenging. Never. Here’s the thing. When you’ve lived your life to want to live your dream, it can never be challenging living your dream. If you were asking me about lifting boxes at UPS or working at the Post Office, I could say it’s rough! But I don’t know what that feels like. I get up everyday and create from how I feel or what’s on my mind. It’s never difficult. Even when you run across those artists who are picky. It’s good to be picky, they want the music to suit them. They say sometimes the artist is a diva. Well sometimes you need to be a diva, if that’s what will make the record hot. That’s a great part of the job. There’s no difficult side to this, it’s just creativity and music.