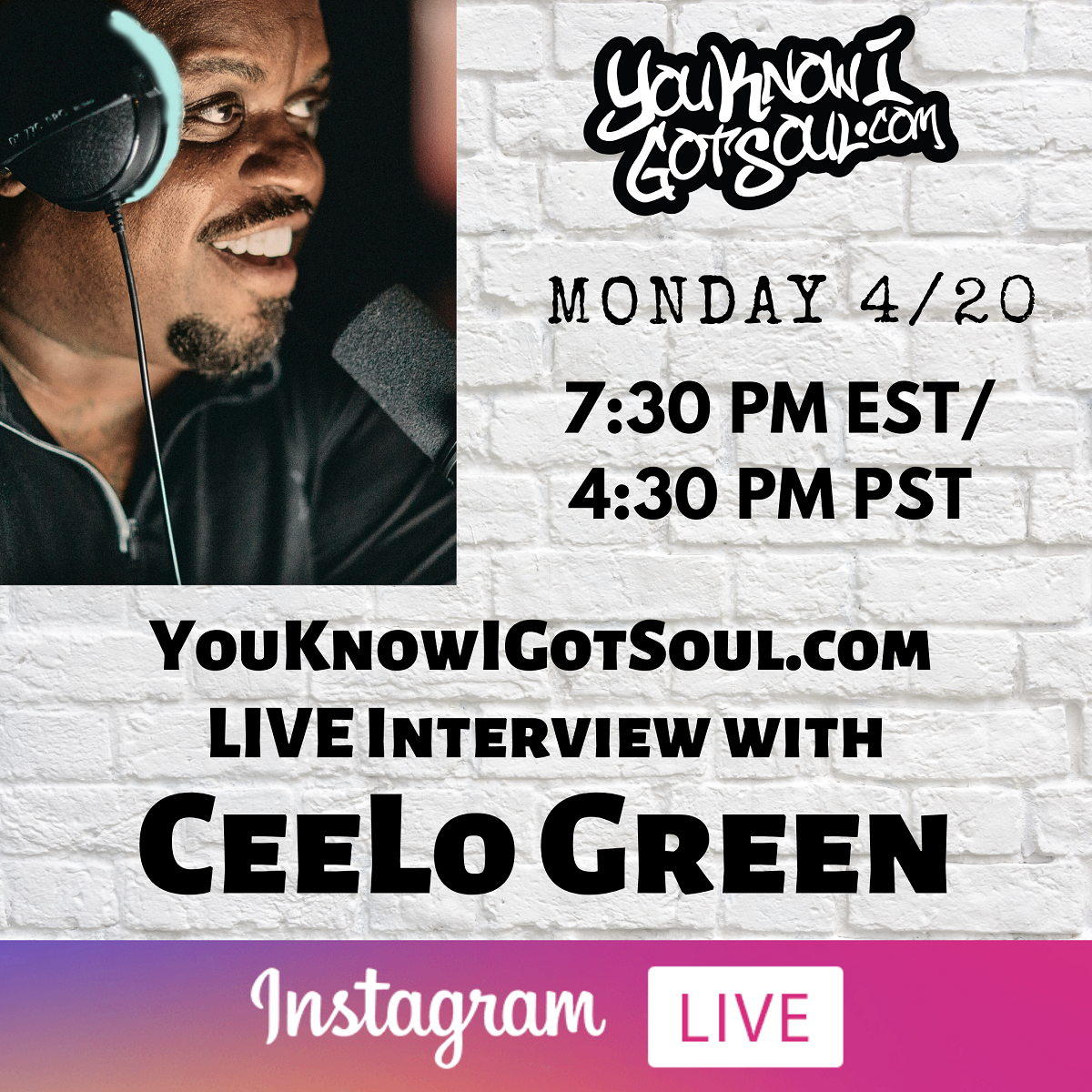 We recently caught up with the legendary CeeLo Green for an interview as he prepares to release his new album “CeeLo Green Is…Thomas Calloway”. The rapper/singer went in depth about his new single “Lead Me”, the unique sound he will have on his upcoming album, how he developed his soulful sound originally, how he originally sang the demo on TLC’s “Waterfalls”, and much more.

YouKnowIGotSoul: Talk about your new single “Lead Me”. We’re loving the live instrumentation and the vintage soul sound.

CeeLo Green: Absolutely. It’s something organic. It’s antique. I say that because, there’s a difference between something, old, vintage and antique. You have to appreciate something like that for it to maintain value. It’s definitely nostalgic in that way sonically. It’s pretty much a period piece but we make it current and relevant.

YouKnowIGotSoul: Will that be the sound we can expect on your upcoming album?

CeeLo Green: Yea. I think that it was a conscious effort on Dan Auerbach’s behalf as producer and visionary for the project. We initiated the project by me going to Nashville and we only had discussed sitting down and writing some songs. I thought it would just be a few writing sessions with him, collaborating on songs for the sake of placements. I had a little downtime, so I wanted to make myself useful. Of course it was an honor and acknowledgement for Dan to have reached out to me in such a way. I definitely jumped at the opportunity. For 3 months we were gong back and forth. I spent altogether a months worth of time writing songs. The last time I went, he wanted to hear what my voice would sound like over the songs. Me being a little nonchalant, I didn’t realize he was secretly building a project around me. Ultimately, in 2 days I recorded the album! What he had done from the demos, we wrote songs to acoustic guitar, ukulele, a real simple and vintage approach. He went and composed sheet music. By the time I got to Nashville, there were elder statesmen in there with grey hair, in their 70’s some of them! Really seasoned veteran studio musicians. It was really a unique and original experience. I had never recorded with a live band. What you’re hearing is the one take. It was really an amazing experience for me.

YouKnowIGotSoul: The new album is called “CeeLo Green…Is Thomas Calloway”. What we love about your music is that you do your own thing. You don’t follow what’s trendy, you make stuff that’s totally different. Talk about your approach to creating music.

CeeLo Green: I’ve been really fortunate throughout the span of my career to offer alternatives and fill the voids with a uniqueness. These kind of rarities. I like to consider myself a shaman for that old spirit. I’ve got all of those ghosts in me and I’ve got to exercise it on occasion. I’m just really an honest and transparent honest. If something is genuine to me, I’ll express it with the utmost confidence. I’m also a win, lose, or draw artist and individual. If I commit myself to craft, I’m all in it at 100%. That type of integrity and dignity, it has to count for something. I’ve been fortunate to act in that way, and it really be the love that’s invested in it be reciprocated the way it has. I’ve been an anomaly throughout the course of my career.

YouKnowIGotSoul: It never seems like you get the credit you deserve for your vocal abilities. You have such a unique tone, and are a legit vocalist. We can remember hearing you sing on the first Outkast album. Where did you develop those talents initially?

CeeLo Green: Earlier today I was describing the title of the album “CeeLo Green…Is Thomas Calloway” and that’s basically a way of trying to define the duality and that split personality between CeeLo Green the persona and Thomas Calloway the writer and author. It’s like Thomas Calloway writes the songs that CeeLo Green performs. Thomas Calloway is the man that I am and the heart and soul. I say all of that to say, I’m a fan of the ones that paved the way and came before me. If it’s one rule of thumb I go by, in order to be great, one must first have great taste. I kind of always have instinctively gravitated to what’s great to me. I have a really diverse listening pallet. I’ve listened to everything from ABC to REM to SlipKnot. I’m just a fan of music. As far as soul is concerned, it’s just more or less, it initiates itself as fanship. The first form of flattery is imitation, and it becomes a second skin, and then embodiment, and the you filter it into your own hybrid theory. All of the sudden you become you because of it. I’m nothing without those things that have inspired me. That’s Al Green, that’s Bobby Womack, that’s Earth Wind & Fire, that’s Jackie Wilson, that’s Prince. Just to name a few.

YouKnowIGotSoul: Talk a bit about your time on the show “The Voice”. The show highlighted vocalists, but unfortunately in mainstream R&B we don’t hear a lot of true vocalists. What is your take on that?

CeeLo Green: I think art doesn’t necessarily imitate life anymore. Art imitates industry, standard and status quo, formula and format. I think that we’ve all bared witness to people succeeding with the least amount of integrity. It’s vindicated by viewership, success and streaming, and numbers and statistics. It lacks soul and substance. It’s not significant, it’s just disposable art. But people don’t call music, music anymore. If you notice, it’s now considered content. I don’t know if that’s regression or what, it just kind of is what it is. If you see with me, I’ll name those namesakes alongside myself and I’ll acknowledge them higher than myself. People can go and reference them. That’s the reason I was able to function with The Voice and do so well on that platform, for it’s always about music education. Sometimes with the younger generation, they like to believe they are doing something for the first time. I was talking to my son the other day about sampling, he’s a producer. I told him what a gift and glory it is for those elders and ancestors to go into those studios in the 60s and 70s and record all of that beautiful instrumentation. There is so much more to sample from, it’s almost like they left us a scroll, it remains as a bridge or grail. It’s just that as far as content is concerned, radio stations and even television stations are more concerned about ads. It could be just about whatever, we don’t realize don’t realize there is a daily diet of self loathing and destructive behavior and narrative. Since we’ve been dealing with quarantine, the diet of what we ingest and internalize and adopt as an ideal or thinking or function. That is the truest virus. That has caused us the most detriment, if you ask me. Ignorance is always our truest and strongest enemy. We’ve got to have music education, we’ve got throw it back. I believe we also suffer from ADD, to where we can only be satisfied for seconds at a time. There was a time when songs could be 10 minutes long. Long gone are the days of free jazz or even disco. That was a method, that was divine math that brought people together and it was destroyed. It was an instrument and vehicle to bring people together. You can’t conquer unless people are divided.

YouKnowIGotSoul: Take us back to when you did background vocals on TLC’s song “Waterfalls”.

CeeLo Green: There was a time in Atlanta when we were really a close knit community. There were only a few studios to go to. Only one major label. We called Atlanta a little big city. With that, what happened was Rico Wade, 1/3 of Organized Noize, who produced all of the first Goodie Mob and Outkast music, him and T-Boz from TLC were really good friends. We were all friends. Marqueze Ethridge, who was a really close friend of ours, one of the resident writers for the Dungeon Family, he was there for whatever was needed. He wrote “Waterfalls” and I demoed the song, I sung the entire song initially. They decided to keep me on with the backing vocals, which was cool.

YouKnowIGotSoul: What do you remember about creating “MomentInLife” with Musiq Soulchild and Kindred the Family Soul.

CeeLo Green: Me and Musiq befriended each other because we went on tour together. I opened up for Musiq. What a moment he had. He invited me to do the record and I loved it. It’s probably one of my favorite collabs that I’ve ever done. A lot of people mention that one. I hear that one a lot.

YouKnowIGotSoul: What about the song “Lil Star” you did with Kelis.

CeeLo Green: Me and Kelis were also friends as well. She recognized me as a writer. I’m always flattered and prompted by the opportunity to go in and contribute. “Lil Star” is just a song about that same kind of humility. If you listen to it, I was kind of vibing off of The Spinners, “Working My Way Back to You”.

YouKnowIGotSoul: Reflect back on your decision to step away from Goodie Mob as a solo artist. How challenging of a decision was that?

CeeLo Green: I see people mentioning the Unsung episode. It was discussed, it was agreed upon, and it was initiated by us being separate entities. We were just kind of being practical in a way of where we could all seize the opportunity while the door was open. Outkast had just opened the door. LaFace was interested. We’re all friends from school and the neighborhood so it was natural for us to do it. But it was agreed. To be factually accurate, Khujo and T-Mo started Goodie Mob, that was their group. I came in as a solo artist. Big Gipp came aboard as a solo artist as well. We didn’t realize that we would gel and stumble upon a synergy that signified something and lead us into a career that garnered us 3 consecutive gold albums. At that time, it was my prerogative to step out and show the world what I was made out of. Obviously as you see now, I was right to do so. I couldn’t really guarantee it for anyone. I think there was a little apprehension even though it was agreed upon. It was mixed emotions. I knew intuitively, I’m trusting of my instincts and soul and spirit, and it smoke to me. I knew it was time. I had paid my debut to Dungeon Family by aiding us and being instrumental in us having an illustrious career. I always knew I’d return back home. I just needed an opportunity to win, lose or draw. I won a couple of times. Then I brought my success and I shared it back home.

CeeLo Green: I’m working on another Goodie Mob album at the moment, and I’m also working on new Gnarls Barkley. I’m very, very busy. I’m going to be so prepared and people are going to be so pleased. I’m trying not to stretch myself too thin where the quality of the content suffers. It takes time to get into separate headspaces, for each of the different projects.