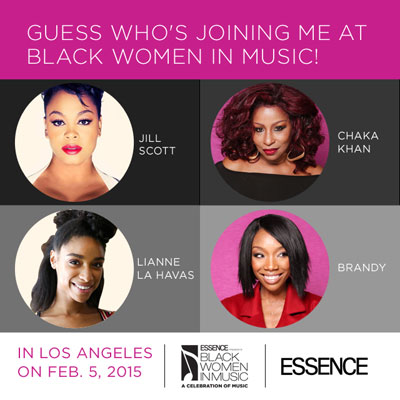 Chaka Khan, Brandy and Lianne La Havas have been added to the lineup for our annual ESSENCE Black Women in Music ceremony.

The three performers join this year’s honoree, Jill Scott, in celebrating the best and brightest moments in Black music over ESSENCE’s 45-year history. The 6th annual event recognizes the achievements of the generations of Black women singers who have inspired and paved the way.
Past ESSENCE Black Women in Music honorees include Mary J. Blige, Kelly Rowland, Janelle Monáe, and Solange Knowles. This year’s event will feature an exclusive performance from Scott as well as several other performances from several classic eras of music. And for the first time, community fans will be able to join in the festivities of this invitation-only event.

Ten-time Grammy winner Chaka Khan has been on the scene for over three decades, racking up accolades and earning the praise of her peers, such as Aretha Franklin and Miles Davis. We’ve watched Grammy winner Brandy grow up right before our eyes since her 1995 debut. She helped shape a generation with songs like “I Wanna Be Down” and “The Boy Is Mine.”

Newcomer Lianne La Havas burst on the scene in 2012 with her album, Is Your Love Big Enough? The London-based singer attracted the attention of Prince—the two collaborated for his song, “Clouds.”

The ESSENCE Black Women in Music event will kick-off our year-long commemoration of the 45th anniversary of ESSENCE Magazine, where Black women have always—and will continue to—come first.

Catch these women, along with other music trailblazers, during ESSENCE Black Women in Music on February 5 in Los Angeles.