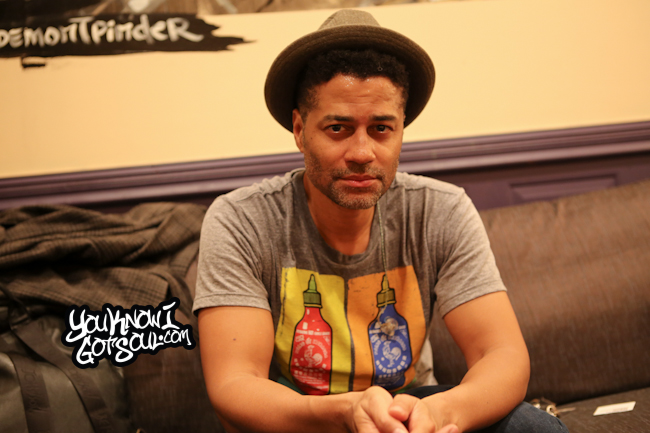 When Eric Benet became an indie artist and began releasing music under his own label Jordan House Records, he didn’t just have success, he started his own blueprint. He released three singles on his last album, a rarity in this day and age, and went on to sign Calvin Richardson and Goapele. Looking at the big picture, his career seems to be in a very good place right now. Oh, and the music he’s created for himself and his artists is very high quality. R&B artists should take note, in the new r&b landscape, this is how you navigate successfully. YouKnowIGotSoul sat down with Eric Benet once again after a recent performance in NYC and discussed his current success, the progress of his upcoming album, working with Goapele and Calvin Richardson, and much more.

YouKnowIGotSoul: You’ve had so much success with your last album, your Jordan House label, and doing all of these shows over the past few years. You’re at a great place in your career right now. Talk about that.

Eric Benet: Yeah, it feels good. It’s been a lot of labor of love and I’m grateful for being able to be at this point where my first release on my label Jordan House Records was my album. It was a very successful release and it has enabled me to sign a few artists that I’ve been huge fans of. I’ve been a huge of Goapele and Calvin RIchardson. I signed them to the label and their projects are out there now. It’s good and we’re just going to keep moving. I’m in the studio right now working on the next Eric Benet studio project. Within the next few months, I’ll have another single out for the upcoming album.

YouKnowIGotSoul: What’s the direction of your new album?

Eric Benet: Well the more I listen to the music industry right now, I feel like it’s my duty as an R&B artist to make sure the integrity of R&B is solid and still represented. On this record, it’s going to be what people expect from me. It’s going to be live instrumentation and it’s going to be un-autotuned vocals and singing from the heart. It’s really just trying to capture the spirit of R&B and Soul. It’s what made me fall in the love with the genre and it’s going to be on this upcoming record.

YouKnowIGotSoul: Talk about being on your own label and what that means to you?

Eric Benet: That’s one of the wonderful perks of being able to have complete autonomy and control of your career. I’ve been able to do crazy stuff like have three or four singles off one project. Right now, the music industry is not only limping but as far as sales and monetizing music right now, it isn’t doing so great. The major labels are trying to figure out how they’re going to maneuver through what’s happening with file sharing and subscription based companies like Pandora and Spotify where somebody like Pharrell can have a number one hit where people play it a million times, but he only gets paid something ridiculously low. It’s definitely not representative of what the artist is doing. It’s an industry that’s in a flux right now and they’re trying to figure out what to do. I’ve been very fortunate to partner up with Primary Wave and BMG and being able to do things. I can sit there and say “That first single went really good. Let’s do a second single and a third one”. I’m in a position where I can really saturate myself out there as an artist sand that feels really good. I definitely wouldn’t have that opportunity at a major right now.

YouKnowIGotSoul: Talk about working with Goapele and Calvin Richardson on their projects.

Eric Benet: One of things I decided to do when I partnered up with Primary Wave and BMG and did this Jordan House thing. I wanted to be the kind of label that would really sit down with the artist and try to help their creative vision come to fruition. I didn’t want to be the dictator type of label head. I signed two artists that I’m very big fans of, so it’s really cool. Once the deal was one and we were about to work on the project, I was like “I’m going to spend a day with the artist and find out what they want to do and how much they want me involved”. With both Goapele and Calvin, it was a wonderful experience. They wanted me very much involved not only in the creative process, but they wanted me co-producing and co-writing some of the projects with them. I did a lot of co-writing and co-producing with Calvin and it was wonderful to help these artist that I’m such huge fans of and just get both projects out there. Goapele’s album is called “Strong As Glass” and Calvin’s is called “I Am Calvin”. With both artists, the response has been like “This is the best I’ve heard these artists come out since I first fell in love them”. There’s no better compliment than that. I really encourage all of you guys to pickup Goapele’s album and Calvin’s as well.

YouKnowIGotSoul: Are you signing any other artists?

Eric Benet: I definitely like to walk before I run. The way the industry is right now, I just want to concentrate on Goapele and Calvin. I want to make sure those projects get the representation and the push that they deserve because they’re both incredible projects. Right now it’s just me and I’m the only other artist on Jordan House.

YouKnowIGotSoul: Talk about the album you put out in Japan.

Eric Benet: The “From E to U: Volume 1” project in Japan was really dope. Every region has a specific thing that they want to hear and that can work in that region. I’ve had a long and good relationship with Warner Japan over the last 17-18 years. I really just sat down and I was like “What’s really going to work here? What’s going to do well?” They were basically “If you just covered songs from the 70’s and 80’s and put your Eric Benet spin on it, that would do really well”. We did that and it was a lot of fun. I did covers of songs from artists I’ve been huge fans of like Hall & Oats, Christopher Cross, Culture Club and a lot of artists I grew up loving and put my own little spin on it. Check it out if you can.

Eric Benet: Thank you everybody out there for supporting me. There’s a project that’s really dear to my heart. It’s called “Mission Save Her” and it’s a non-profit that I started with a friend of mine. In an attempt to counter and raise money for non-profits that are supporting women for human trafficking and the sex trade. I spent some time learning statistics about things that were unbelievably sobering and it’s crazy when you think about the numbers of women that are victimized by this all over the world. I went into the studio and asked some friends like Brian McKnight, Faith Evans, Brenda Russell, Ruben Studdard and so many other artists. They joined me on this song I wrote and the song was called “Save Her”. We’re going to raise money for these non-profits. Yeah, it feels good. It’s been a lot of labor of love and I’m grateful for being able to be at this point where my first release on my label Jordan House Records was my album. It was a very successful release and it has enabled me to sign a few artists that I’ve been huge fans of. I’ve been a huge of Goapele and Calvin Richardson. I signed them to the label and their projects are out there now. It’s good and we’re just going to keep moving. I’m in the studio right now working on the next Eric Benet studio project. Within the next few months, I’ll have another single out for the upcoming album.