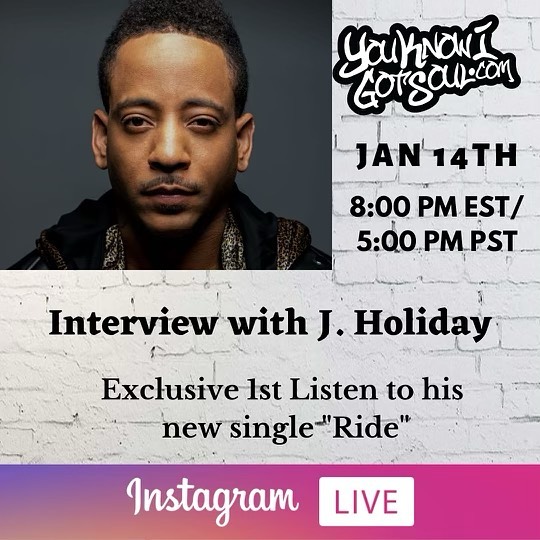 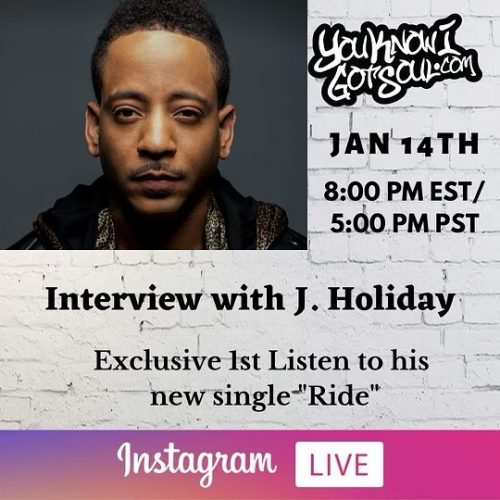 We had a chance to speak to J. Holiday recently to talk about his new single “Ride”. The singer has had quite a journey even since the release of his last album “Guilty Conscience” which was removed off streaming platforms recently due to some label politics. We talk to him about that album and whether it’ll ever be available for download again. Lastly we talk about what we can expect from his upcoming album “Time” which is set to come out this Spring.

YouKnowIGotSoul: We were just listening to your last album “Guilty Conscience” and that was such an underrated project.

J. Holiday: Let me tell you how bad the business was for “Guilty Conscience”. The guys on the other side of the track have taken the album down off all streaming platforms. After we get the “Time” album done, I’m going to do a personal leak of “Guilty Conscience” for people that want to hear it. You won’t have to pay for it. People have been like “I can’t find the album anymore” and I was like “Seriously?”.

YouKnowIGotSoul: “Guilty Conscience” was one of those projects you could play from top to bottom and your vocal performance was top notch along with the story telling. Will we hear that on the new project “Time”?

J. Holiday: On this album, we played around with a lot of different sounds. A lot of people have never heard me in my lower register like on my new song “Ride”. I usually don’t sing in that tone. You have to expand your horizons and let your fans see what you’re capable of. During “Guilty Conscience”, I was really going through something with dating and child support. I was being a horrible guy, so I was like “Let me put that on record”. The whole point of that album was telling everyone I was taking responsibility for my actions.

YouKnowIGotSoul: What are the conversations that you have with your team these days to make sure that your music reaches everyone? I know it’s a challenge in today’s industry.

J. Holiday: I’ve never been the interview guy. One of my first interviews in a long time was with you guys. I said “Why wouldn’t I do an interview with them? They’ve been supporting me since day one”. I had to mature. It was one of those things where I had to decide whether I wanted to continue to be an introvert to my team. I had to start letting them know what I wanted to do so we could figure it out together.

J. Holiday: I don’t. It’s funny because of my manager Darius is an A&R at heart. He’s a great manager, but he’s actually an A&R. I’ll try to send him some stuff sometimes and he’ll be like “Don’t send it to me until he’s done if this isn’t what you want the final product to be”. He doesn’t want to mess up any vibe that I have going on. I still don’t have to have those conversations though. Me and my manager have such a dope relationship because he saw me as a young artist when he was at Capitol. He understands that I just want someone to believe in me. That’s the system we go by.

YouKnowIGotSoul: Let’s talk about your new album “Time”. What can we expect on there?

J. Holiday: I didn’t do the tracklisting for my debut album “Back Of My Lac” by myself, but I learned that it matters. Every album I’ve done since that one has had a theme. I’ve figured out with this album how to mix sounds. When people ask me what my sound is like now, they’ll know when they hear it. “Bed” and “Suffocate” weren’t my sound but songs like “Wrong Lover” are. I do that on all my albums. I think it’s going to be dope. This is some of my best work. “Guilty Conscience” is probably going to be my best vocal album, but we weren’t focused on that for this album. We were focused on feel, lyrics and stories. We just wanted to be authentic.

YouKnowIGotSoul: You also released the mixtape “Baecation” recently. Talk about releasing this mixtape because I know you don’t like giving away music.

J. Holiday: I got paid for it. *Laughs* We had a bunch of songs that we could put out. I did the song “Baecation” in 2020. I’m happy and content with the mixtape because there are songs on there that most people would never hear because they would never be on my album. Those are songs that I can’t sell to anyone, so I put them on the mixtape so people can hear it.

YouKnowIGotSoul: You just released the single “Ride”. The vocoder at the end of the song is brilliant.