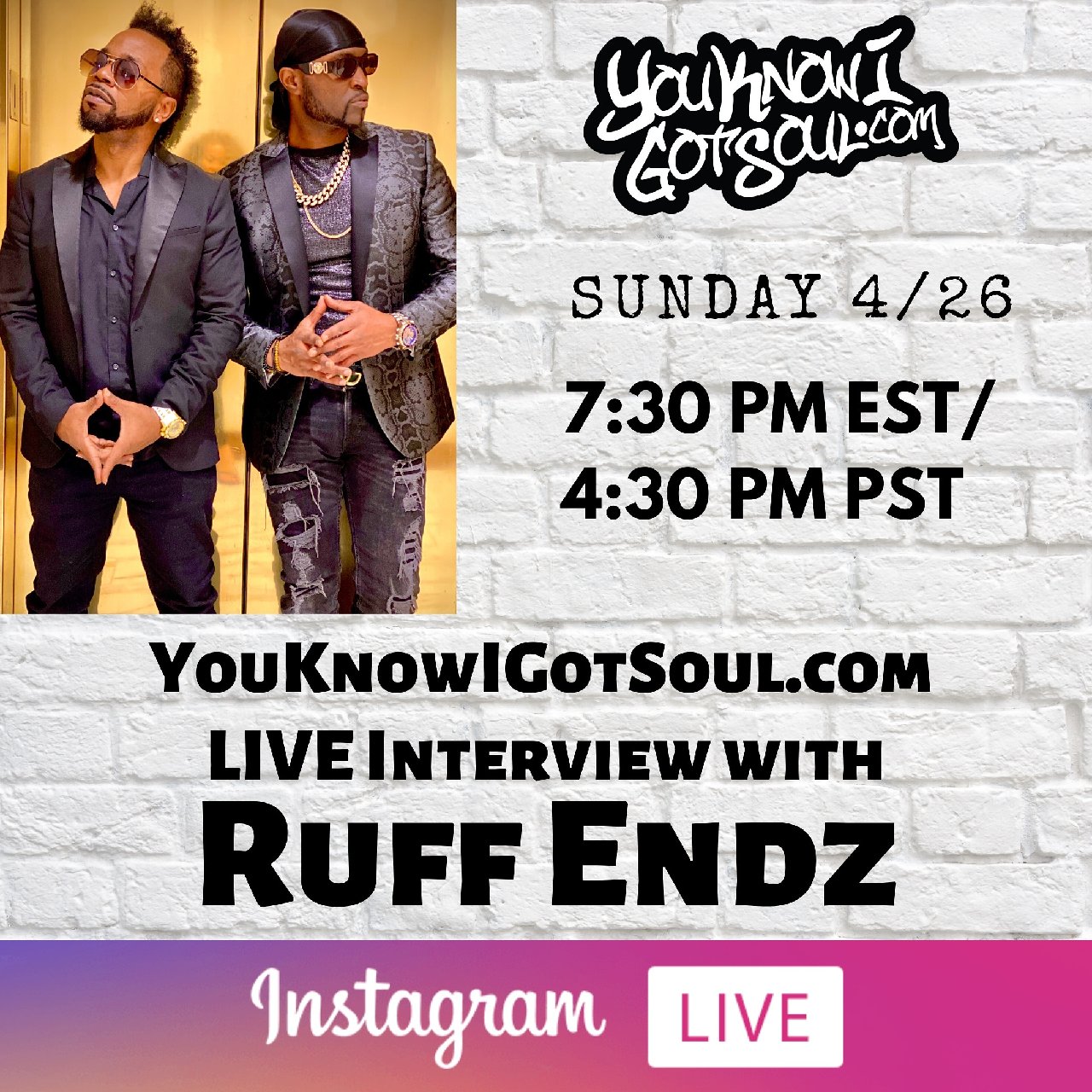 We recently caught up with Dante “Chi” Jordan of Ruff Endz for an interview on Instagram Live. Unfortunately his partner David “Davinch” Chance was unable to make it due to the social distancing we’re all going through! During our conversation, we touched on the group’s latest album released “Soul Brothers”, the origins of how they originally formed Ruff Endz, creating their debut album, their hit single “Someone to Love You”, and what’s next.

YouKnowIGotSoul: Take us back to your last album “Soul Brothers” from 2018 and what you remember about creating it?

Ruff Endz: It was the chemistry reuniting. It was the two powerhouses coming back together and merging those energies back together. The album was the sound of two brothers getting back together. We put the band back together! It was finding a piece of myself again, as well as for David. Just to be in the lab creating and sit back and listen to what we just recorded, wow. I missed it. This expression of our music together is always amazing. That “Soul Brothers” album is rated P for positive. You can play it with your lady, have an intimate moment, you can play it around your kids or mother. It’s going to be a certain level of respect and cleanness.

YouKnowIGotSoul: Take us back to the beginning of Ruff Endz. How did you come together as a group?

Ruff Endz: Before me and David linked, I was 14 or 15 with another group. I was the youngest in the group, and the next youngest person was 28 or 29! The group was called Total Male. I was supposed to be in school, but we were doing shows! *Laughs* But at the same time, I was kind of in the streets and not in school like I was supposed to be. But the group pulled me back in and got me where I was supposed to be. Me and my mom had this agreement where I would get my diploma. Soon as I started school, I ran into David the first day! They were cutting class in the music wing of the school. When you open the door you can hear the harmony and people singing. I went to where the harmony was! I sat in and me and Dave when we linked, we hit it off. We had known each other’s family from church. My family was more into the streets, and his family was more into the church. His mother and father are pastors and give out clothes. It’s like that kind of difference. We linked up in high school and started a group that I can’t remember the name! We had four guys. At one time we even had a situation on the table with Patti LaBelle. But the group had differences and we couldn’t keep it together. A great friend of ours who is one of the former members of Dru Hill, Scola, he has always been a great friend of ours. He is someone we looked up to in the neighborhood. He switched his life around from being in the streets to doing music. He had us in his videos. He told us to get in the game and make ourselves known. He told us to do it with just me and Dave. At the time we were known as Dave and Brown. But we were nervous because we had never heard of a group with just two singers succeeding in the industry. It was a very unsure time for us. It was something new, a two man group. We said let’s do it! Ruff Endz was born at that moment.

YouKnowIGotSoul: How did you end up getting signed to Epic Records?

Ruff Endz: That was another level of determination as young men from Baltimore. There was a lot of violence going on at the time so that fueled our fire. We started writing and recording our own material. We found out how important it is to be writers. We started linking with producers, Dave had started producing tracks as well. We started putting together our demo. We just networked and met an incredible writer named Stephanie Cooke, who had done background vocals for Mary J. Blige. She introduced us to Oji Pierce, he wrote “This Is How We Do It” with Montell Jordan. So he got us on the “I Spy” soundtrack. He walked us right into the office at Epic Records, we let them hear the demo, we sung live, and it was history. Dave McPherson signed B2K and Mandy Moore, so we were part of a crazy roster.

YouKnowIGotSoul: Talk about the creation of the debut album “Love Crimes” which had the hit single “No More”.

Ruff Endz: Shout out to everyone who was a part of that process. Shout out to the group LuvHer, which was Sisqo’s group. Also, the incredible writer Chinky. It was a point of time when we got our advance from Epic Records, just kids from Baltimore, everyone heard we got signed. We took crazy trips to Atlanta to meet with people like Jazze Pha and Polow Da Don. Jagged Edge and Destiny’s Child and Ideal were all around at the time. It was crazy. We were there the day Johnta Austin placed “Sweet Lady” on Tyrese! Some of the songs that never even made the album were incredible. Working with people like Bryan-Michael Cox doing the song “Apologize” on my first album. Working with Manuel Seal, who had done a lot with Usher and Mariah Carey. It was a crazy time. We recorded a lot of songs. We really got to know our craft. We really got a chance to develop our sound and hear ourselves as singers and writers. It was incredible. It was our proving grounds, we really learned to sharpen our craft by singing stuff 100 times! Looking back, I appreciate it for what it was.

YouKnowIGotSoul: Take us back to the hit single “Someone to Love You” and creating it?

Ruff Endz: Shout out to Troy Oliver. Shout out to Cory Rooney. Shout out to Dave McPherson. He called us up and asked us to link up with Cory Rooney. So we went to upstate New York to his studio. We met Amerie there recording her album “Touch”. He brought us to the studio and said he had us in mind for the song. He sat down at the piano, started playing, and he took me to another place! It was a hit already! I felt appreciative. We started smiling looking at each other knowing it was for us. When we sung the song, I felt like we made it our own. The song was already dope when it was delivered to us. When people heard it at the label, they knew that was it!

YouKnowIGotSoul: What can we expect next from Ruff Endz?

Ruff Endz: Super excited about this question! We are practicing social distancing right now, so we are being responsible. But it’s hard for us to be apart, but we want to be together recording and getting you this new music. We have an incredible list of artists we’ve wanted to work with for so long, that we’re going to have on this 20th anniversary Ruff Endz album. This is the 20th anniversary of Ruff Endz, we came out in 2000. We are celebrating it with an incredible album. We got a new situation and a new manager. Shout out to Universal ILS. We’ve got some amazing, unprecedented things for Ruff Endz on the way. How can I say enough without saying too much! I want to let the cat out of the bag so bad.