Tank Talks “While You Wait” EP, Return to Traditional R&B, Evolution of his Sound (Exclusive) 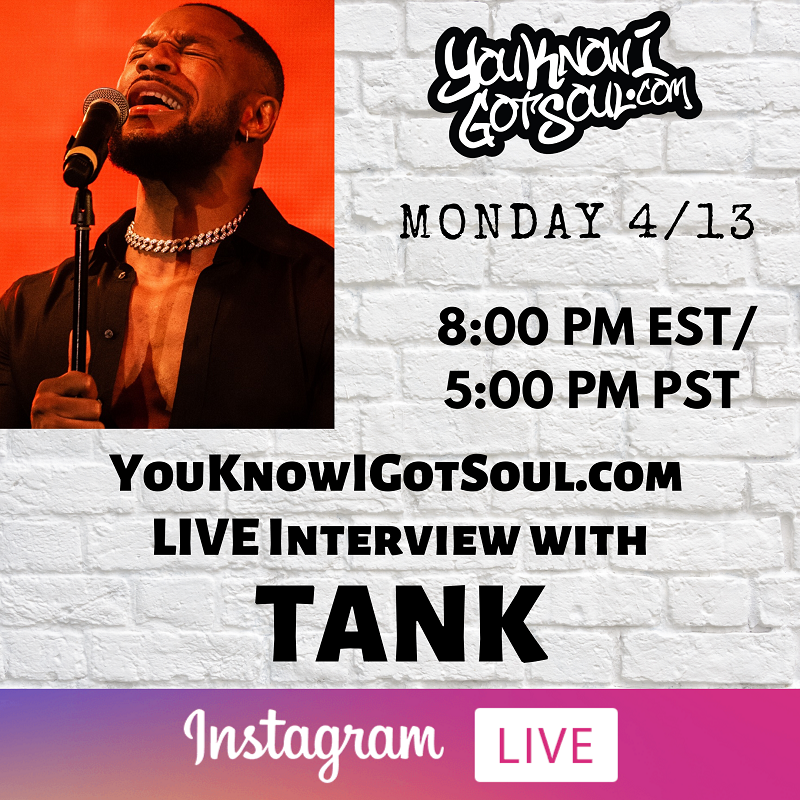 Tank recently joined us on Instagram Live for an interview to discuss his latest EP “While You Wait”. We spoke about the singer’s return to a more traditional R&B sound and how it’s been received so far.

The discussion then turned to the evolution of his sound and how hard it is to convince every one of his fans to buy into it. Finally, we reflected on his amazing song “You’re My Star” and classic album “Sex, Love & Pain”. Check out what he had to say!

YouKnowIGotSoul: Talk about the traditional R&B sound you have on this new EP “While You Wait”.

Tank: Well, I felt like the “Elevation” album sound would only be good in pieces for certain people during this kind of time. What’s the backdrop or soundtrack to people to where the family is altogether. It’s the mom, the dad, the kids, and the full household. In a house like mine, we had the grandmother, grandfather, some uncles and aunts. We are all in here in this close space. Where is the vibe for that which we can all no matter what fill the space for all of us. “While You Wait” is a thing where while you wait for everything to get back to normal, whatever that will be after this, here is a soundtrack for it. It’s soothing to ease some of the stress or relieve your mind.

YouKnowIGotSoul: You’re one of the few who can pull off a project like this while we are all quarantined. You are a triple threat who writes, produces and sings. Did that make it much easier to get this project done?

Tank: Yea, thank God for technology like Zoom and all of these things. If you need to try to figure out how to write with your producer or figure out how to get your favorite writer to put your stamp on what you’re doing, you can do that. Like you said, I can put this together, tracks, songs and all in five or six days. Then I call my guy and say I need to get it up, and it’s that simple. It’s not just the creative part, but I’m the owner. I can pretty much move however I want to move. That’s something that I worked hard for and fought for.

YouKnowIGotSoul: In the past you’ve been vocal about not always getting the support you deserve when you put out traditional R&B music. So how has the response been to this project?

Tank: I will say the reception of it has been really good. For me this time around, just being traditional, wasn’t necessarily about the numbers. It wasn’t about the success of it. It was really about the moment and whoever I could help at this moment. I’d be happy with 100 people or 100,000. I did it for something totally different. Before when business played more of a role in it, as you are exhausting a budget, and you do have a company with a whole building and floors attached to it, then you deliver and no one shows up when there is more on the line. It’s easy to feel a way. For me there was no pressure on this, it’s just me and my art and the people that hopefully enjoy.

YouKnowIGotSoul: We caught the lyrics on the song “My Lovers” where you talk about missing love songs on the radio and things like that. Did the song have any additional meaning to it?

Tank: No hidden meaning. Just where is black love on mainstream radio. Where is it? We’ve got everything else black, we’ve got the hood, we’ve got drugs, we’ve got killing. They might not just equate that to black people, but our hood experience is mainstream. Why not our love? Not even saying let’s get rid of the hood experience. I’m from that place and I get it, it’s the soundtrack to some things I’ve experienced. When I’m in the club I need that. I need them to throw on something that’s going to make me tap into my inner bank robber! I just want a little balance. The fact that we can pick out Ella Mai, her R&B song, and say they played that. The fact that we can say one person, in an entire year, that had a successful run on mainstream radio, is just not cool!

YouKnowIGotSoul: We’ve got to give you props for being one of the few R&B acts left who are still getting songs on radio. You’ve done your part and even reinvented your sound. Talk about that journey.

Tank: I’m just a competitor. It starts with me on the field. When you go out on the field, you aim to win every game, that’s why you prepare. Ultimately it boils down to your performance and how you’re received. I can’t take all of the credit for that. I have to give that to the people who supported me. From the fans all the way to my partnership with Atlantic Records. I’ve been there since 2010. They didn’t get into business with me to see what happens. They wanted to figure it out and win. When you have a partner like that and fans like that, you can’t do nothing but thank God.

YouKnowIGotSoul: How do you approach the population of your fan base who are not willing to accept you as an artist as you evolve?

Tank: You expect it. You are kinda changing the packaging on ketchup! When you walk into the aisle looking for ketchup, there is a distinct thing you know since you grew up. When you walk into the aisle, and ketchup don’t look like ketchup anymore, you wonder what’s going on! If you buy it and take it home and actually put it on the hot dog, you’ll find out that it’s just the package that was altered. I still have something for everyone. But guess what, we need more people. So, as I evolve I’m not evolving as in let me hear what’s happening and try to do it. I’m part of the evolution. I help write and produce for all of the young kids and these moments. An evolution for me is not forced. This is honestly where I’m at. When I drop “When We”, I’m touring strip clubs, that’s where I’m at! I want people to know that as I add colors to this rainbow, the colors that started the rainbow are still there. They haven’t gone anywhere. Come to a Tank concert and see it all. Not just one thing. R&B music was created to change the world. That sound is not always the same or the lyrics or the melody. If it’s from your heart, if it’s that blues, that’s R&B.

YouKnowIGotSoul: Have to point out that people never properly appreciated your song “You’re My Star”. That song was a masterpiece and one of the best songs we heard in the 2010’s!

Tank: Do you know the strings and the red tape we had to go through to get that song done! That is Michael Jackson! I had to learn choreography for hours a day to make sure I didn’t look old! It was a moment when I thought they were going to appreciate me calling them stars instead of being called bitches all day. I really wanted that one to be a hit!

YouKnowIGotSoul: Have to give you props for your latest album “Elevation” for you bringing in legends like Keith Sweat and Shawn Stockman to work with you.

Tank: Shawn is a hero for me. He’s a staple, he’s more than a legend, he’s fabric for R&B. Anytime I have something or hearing something, I think that feels like him! I’ll even throw some of his runs and textures. I took a lot from him. We looked up to one of the same singers, a guy from Commission, Mitchell. We’ve got some of the same things and I took a lot from him. When we got on the first song, he asked what he was singing on! When Shawn Stockman asks what he’s singing on, you better pull some shit up and be ready! *Laughs*

YouKnowIGotSoul: We saw you mention there might be more songs added to your current EP. Is there more to come?

Tank: I put out a challenge. I said if I get 1000 responses I’d do more songs. I honestly did not expect to get it, but we did! Now I’ve got to do more songs! I did one already, which I added Ashley J to. I’m adding more songs, I’m giving this a little time so people can digest this. While you wait for more songs, listen to the EP! *Laughs*

YouKnowIGotSoul: As an artist who is forced to be in quarantine like the rest of us. How are you adapting? You’re not able to be on stage and touch your fans that way.

Tank: I get on my Live and hang out with people. I’ve been to club quarantine a lot with DJ D-Nice. I don’t think people really understand what it means for someone who does what I do to be at home. Not just be there sitting there and hanging around, but actually in being involved in the home process. To whatever your wife needs, to whatever the kids need, to cooking and cleaning and washing clothes. I’m home and I’m enjoying being home. From a business side, I’m an owner so I have advantages that most artists don’t have. I’m a writer and producer and can leverage my catalog and do certain deals. I can put out an EP and charge almost nothing for it. I’m able to do certain things that a lot of people in my position can’t do. I’m thankful for that. I don’t know, we’re trying to come up with creative ways to still deliver the music and live performance. That’s what people crave from R&B music. We’re talking to some people and trying to figure out how to do it the right way. R&B is up against so many things already. The last thing we need is poor quality. I want to get our performance value in this space on a level. That’s what we’re working on right now.

YouKnowIGotSoul: Name a song from your classic album “Sex, Love & Pain” which should have been a single.

Tank: You know what jumped off? “I Hate U”. I would do that song in concert and they would go crazy. They really love that song because it was so true about how that love and hate works, all at the same time when you’re dealing with a particular person. That’s one. I wish “Heartbreaker” would have been bigger as a single, but I think “I Hate U” could have done something.

YouKnowIGotSoul: Is it hard to perform the songs from “Love, Sex & Pain” even though you’re no longer going through the pain?

Tank: I can dial it up. It’s not pain that someone wrote for me. It’s pain that I experienced for myself. I’m able to go there and tap in with someone in the audience who might be going through it. I know that pain, I promise you I do! I’m still able to grab energy from that and deliver it.