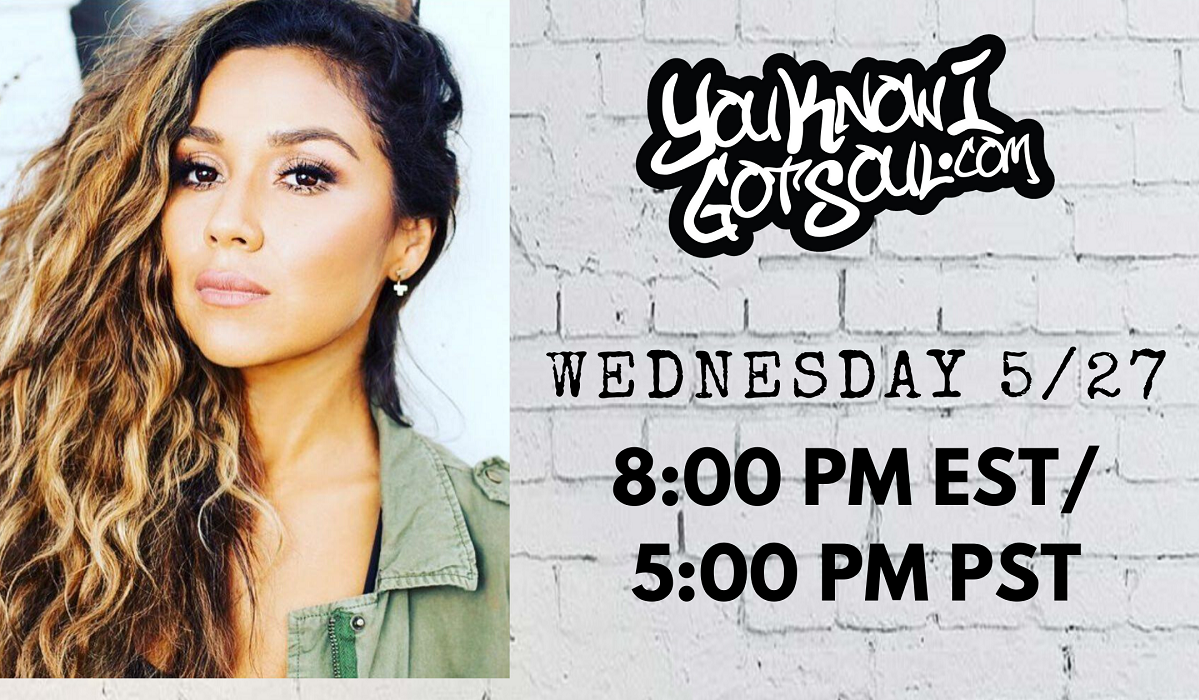 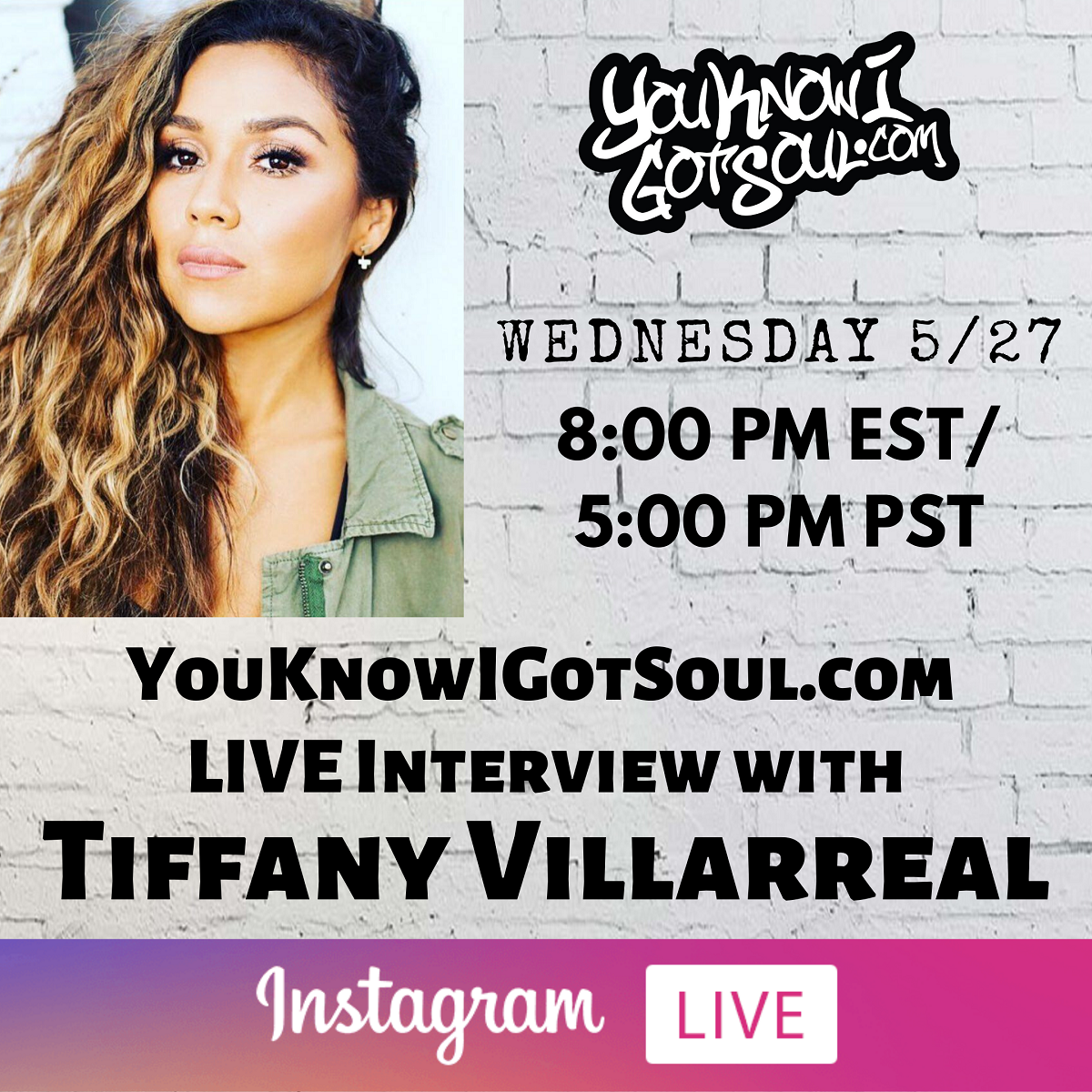 We recently had a chance to interview Tiffany Villarreal on Instagram Live. During our conversation, we talked about the start of her music career with the group 702, recording her first album with Missy Elliott, her self titled debut album, linking up with Pharrell for his group Affair, signing a record deal with Dr. Dre, her latest album “Wild Flower”, and more.

YouKnowIGotSoul: How did you originally start your music career as a part of 702?

Tiffany Villarreal: I was in history class with Meelah. They were looking for a new member and they knew I sang. They asked if I wanted to audition. Of course I love R&B, so I auditioned and it came about like that. The blend was awesome. I learned so much during that time. It’s a lot of hard work when you’re in a group. Making music, and making a group, and making a look, and making a sound. My hat goes off to anybody who’s ever done the group thing.

YouKnowIGotSoul: You didn’t stay with the group, but you went off and got your own solo deal, and had an album produced by Missy Elliott. How did that even happen?

Tiffany Villarreal: I really think it was God’s plan, I couldn’t have done it on my own. Certain people are directed into your path. It started in Vegas with 702 and cultivating a true friendship with them. Missy was obviously working with 702 and Missy was around, so she obviously knew that I sang. I wish people could have heard those songs. I still every once and awhile will go back and listen to them. They were something really, really special. She is so inspiring and encouraging as a female artist and human being. She has good messages, she wants people to be entertained and have fun. This world can get heavy sometimes. I learned so much from her and I love her message and the essence of who she is and her artistry.

YouKnowIGotSoul: Even though that album never came out, you never gave up. What was the journey like to getting your next label deal?

Tiffany Villarreal: Yea, I actually got three record deals. You have to have some thick skin, this business is not for the faint of heart. Just know that there is going to be rejection, you have to believe in yourself. I think for me, I was searching for my sound. My first record deal I was 19 or 20. I was still searching for my sound. I’ve met so many amazing writers and producers along the way, but I was still finding myself, I was so young. Handling rejection is something I had to battle. Music has always been a part of my life, and will always be. I’m still creating but kinda just on my own.

YouKnowIGotSoul: What do you remember about creating your self titled debut album?

Tiffany Villarreal: You just strolled down memory lane. That was a good time, it was a time when your dreams are just manifesting. This whole new chapter in life just opens up to you. You get a record deal and then you have these sessions. I think it’s a little different than how it is now as far as the signing and recording. But for me, the A&R I was signed to definitely allowed me a little more freedom in what it is I wanted to explore. It’s unfortunate. I wish the world could have heard the hard work the producers put into it. I worked with Mike City, Nature’s Finest, Beau Dozier. It was a really amazing new chapter, a whole new world. I guess you could say I was a little naive to everything. It was a huge learning process and I definitely just cultivated more wisdom and knowledge.

YouKnowIGotSoul: What’s your favorite song on that album?

Tiffany Villarreal: “Better Woman”. Deep down even then I was already finding my sound, and that was content. The messages in the song are really important to me. That’s a tool to help shape culture. So that was the song which was like my anthem song for my girls.

YouKnowIGotSoul: Talk about being a part of Pharrell’s girl group Affair. How did that come about?

Tiffany Villarreal: There was a producer I was working with at the time, JR Hutson. It was another one of those divine connections. That was an amazing time, that group was going to be amazing. He was working with the Pharrell camp and they were putting together a Spanish girl group like the Supremes, who could all sing. He brought the opportunity to me, asked if I wanted to audition, and I was interested. At the time, I had lost my second record deal, and I had hit rock bottom. I had no money, no car, taking the bus, getting evicted. Just the musician’s life, that was my story. It was an amazing opportunity. I sang for Pharrell. I’m not sure they do that anymore, sing for labels, now with Soundcloud and stuff. Back in the day I remember giving my demo to Jon B.! They don’t do that anymore. In that scenario, I got in the group, and it was amazing.

YouKnowIGotSoul: Eventually you began working with Dr. Dre, how did that happen?

Tiffany Villarreal: A friend of mine, she’s a writer, and we would write together. She was working with a particular artist and asked what I was doing. She asked me to come help write a song. We just start working together and we linked up with Taura Stinson, who was also working with Dr. Dre. He was looking for an artist, so she encouraged me to take the meeting. Dr. Dre called Pharrell and told him he was going to sign me. More good times.

YouKnowIGotSoul: How humbling has it been in your career to have so many situations that didn’t work out and still bounce back?

Tiffany Villarreal: It kinda comes with it. You lose a record deal, you don’t have a place to live. You don’t have transportation. I was doing extra work. You go from having two record deals and trying to figure out how to do this music thing. It’s not like you can have a regular 9 to 5. You can feel discouraged and down. I wish I could have done more and it wasn’t on the scale I wanted to do it. But there is still more coming. You think about tours and going to meet more people and collab with them and get more of your message out. I just love music. Creators are going to create, that’s what we do.

YouKnowIGotSoul: Talk about the “Wild Flower” album you put out last year.

Tiffany Villarreal: I really wanted to do something that was a reflection of my heart. For me, I wanted to touch on topics like confidence and values and integrity and knowing your worth and a woman. I do realize that content is important. Music can be a great teacher and guide for culture. I know that might sound a little lame, but for me, great messages are a part of my tapestry and how I want to create. It’s what I want to use in my palette. It’s called “Wild Flower” because I feel like there was an awakening that happened with a lot of stuff that’s happened in my life. Sometimes I feel like when you are creative, we’re not always the best with words or conversation. Sometimes the best way to convey a feeling is through a song and a melody and harmony and lyric. I had amazing help with that. My friend Taura Stinson is an incredible writer and one of my best friends. I expressed to her my idea and she was totally on board. She knows the reflection of my heart. It’s a place I’ve fought to get to and I’m proud of that. I think I wanted to share that in my music, this growth. Just an essence of knowing who I am. I’m really proud of that work. When I recorded it, I recorded it in my home. I went from recording in huge million dollar studios to figuring it out on my own and recording on my own. Just vocal producing on my own. The producers who did the music for it, I just shared the latin type of vibe I wanted to do, a different color to do in my toolbox.

YouKnowIGotSoul: “Love Me More” is an amazing song you had on there, so much feeling.

Tiffany Villarreal: Yes! I don’t think I showered for like two days singing that song! I was completely depressed; I was just getting ready to go through a divorce. It was really hard times for me emotionally and mentally. I’m a mom, so you have a certain window to be creative and allow yourself to heal, so that was my time. Even when I listen to that song back, I can hear the hurt, it was a painful moment. Like I said, creators have to create. There’s a healing power there and restoration. For me it was a healing process, that album was not only a reflection of my heart, but also a moment of healing. Sometimes as women we lose ourselves in relationships, and it’s good to find those songs to remind you. That song was a reminder to myself and others.

YouKnowIGotSoul: Talk about some of the other projects you’ve been working on.

Tiffany Villarreal: I’ve been working on a book, the manuscript is done. I also think it ties into the music, I’m all about empowering, knowing your worth and value, encouraging. That’s basically what the book is about, everything ties in. I’m definitely embarking on something brand new when it comes to writing a book. I don’t think anybody is meant to be put in a box. There is so many things creative people can do. Don’t let anybody tell you that you can just do one thing. Just keep sharpening those skills and you never know. I’m excited for it. Just creating. This quarantine situation just puts a lot of things into perspective and makes you think about what makes you come alive.