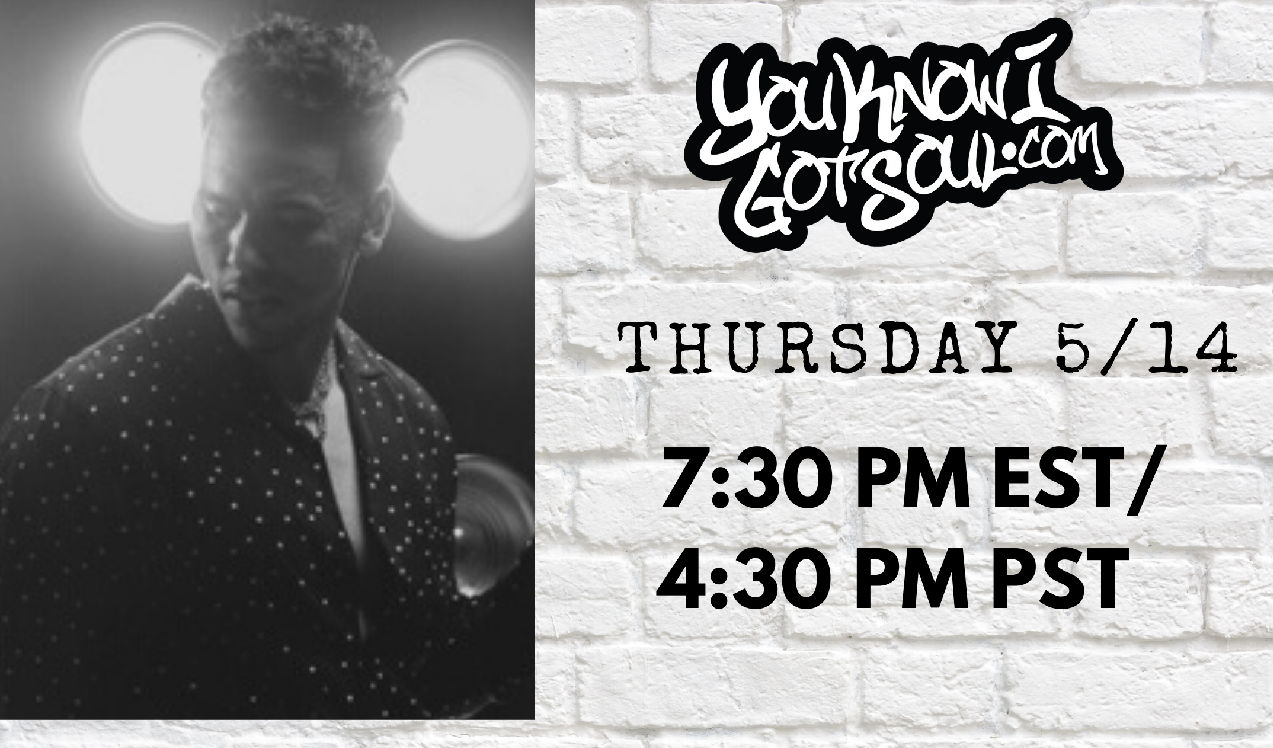 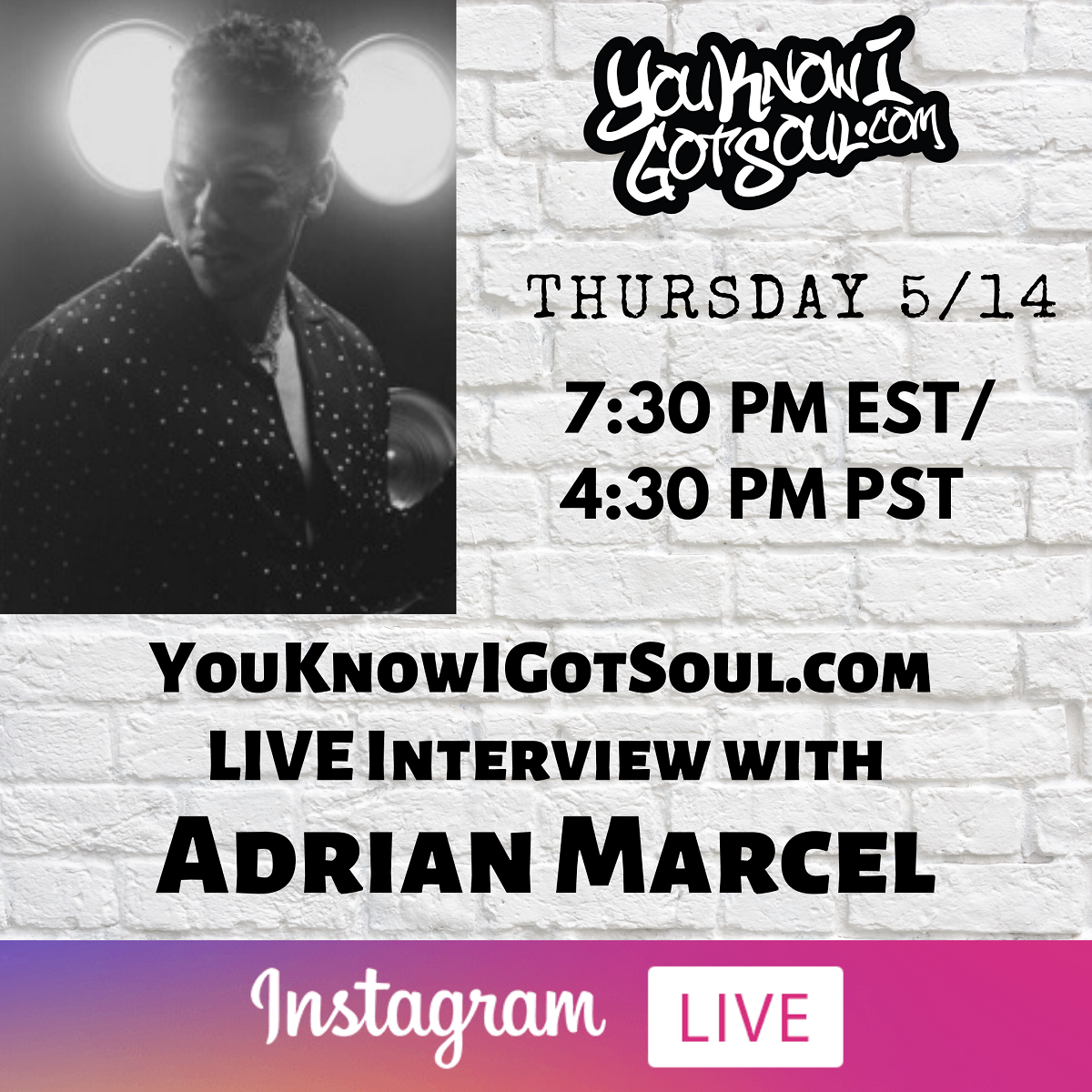 We were able to catch up with singer Adrian Marcel recently for an interview on Instagram Live. This comes on the heels of the release of his video for current single “Nowhere” which we were able to exclusively premiere on the site.

During our conversation, Adrian discussed his four part video series that will be leading up to his next project. He gave us some background on the upcoming album which is called “2B Honest”.

Adrian then took some time to reflect back on the release of his previous album “98th” which came out last year.

We then talked to Adrian about how he originally linked up with Raphael Saadiq and was mentored by the Bay Area legend. This led to a discussion of Adrian’s first mixtape “7 Days of Weak” and what went into the creation of that standout body of work.

The interview wrapped up as we discussed the time period that Adrian Marcel came into R&B and how things might have been different had he come out in the 90’s.

YouKnowIGotSoul: Loving the new single “Nowhere”. Talk about that song.

Adrian Marcel: I started working on this piece probably a month or so before the whole Covid-19 scares and all of that. I told myself as I was doing the tour and finishing up, that I wanted to start to create a new groove for myself. I’m so used to being the vibe, setting the tone, and the chill back. I think it was time for me and how I was feeling, I was on tour, just the traveling part with the team and taking in that energy, I needed to put that into the music. It was a lot of movement. The moment we got to Chicago, I sat back and said this groove had to change. I want people up and feeling good and the vibe to change. When I got the track, it was so fire. It gave me so much life. Immediately I got excited. I connected with a few dope writers. We just had a good time writing it. When it was done, I wanted to wait and sit back and do what I usually do and take my time. This one was more or less, you have to put this out now. We immediately went into brainstorming mode. I was excited to finish and hear it, and it’s been received very well. In this time I didn’t know we wouldn’t be able to go no where when the record “Nowhere” came out.

YouKnowIGotSoul: Loving the video as well! It must have been done before quarantine!

Adrian Marcel: The day after quarantine began! We just got back to California from tour. I was with my film crew. They were on tour with me shooting the whole thing. I fell in love with their edits and spirits. We had been talking about doing videos but we didn’t have a lot of time to do what we needed to do to finish it. They flew back and as soon as they came out, that weekend, we were sitting around and vibing and talked about the video treatments. A lot of the album is done. I wanted to do it a little different from “98th”. With that album I took a swing at one record. This time I didn’t want to do it the same, I need at least five videos ready to go. We sat for four hours and created a story and found the songs that fit. From that we created a treatment and a script. We started thinking about instead of having all of these different elements, we wanted everything to go together. I love acting, it’s a first love of mine, music just sort of came first. We wanted to make sure there were all of the elements of the acting world as well. With “Nowhere” I wanted you to see my confident and that fantasy in my head. You see me dancing and it a different sort of light. The next one is a transition to a different type of character. The final one sums everything up. I just want people to see as many different spirits and characters as possible in this series. It’s all different elements of who I am.

YouKnowIGotSoul: Your upcoming album is called “2B Honest”. Any other details you can give us about it?

Adrian Marcel: This one was fun. The tempo is completely different. I’ve always been sort of a slow moving person. Not lazy, but I move to the beat of my own drum. I think I’ve always listened to the signs of how the world works and where it’s at right now and feeling vibrations and such. Something was giving me that “Up”. More than anything, that’s what people need right now. We need to be in a positive space and be motivated. The reason I called it that is because at this point in time, we have nothing else to do but be honest with ourselves right now. You’re not out partying and flossing or faking the funk. The chains and the cars don’t matter right now. What ultimately matters is your spirit. I think now is the best time for an artist to be who they are and stand for what they believe in. I’ve been able to dive into things I’ve wanted to for awhile now. Ultimately it adds to the artistry and who we are as humans as well. I’m able to be a better me and just understand myself in a different degree. Even with “Nowhere”, I’m just doing things that are organic, like dancing. That’s what the music is doing to me. Right now more than ever I believe in my artistry.

YouKnowIGotSoul: Reflect back on your debut project “7 Days of Weak” and linking up with Raphael Saadiq to create that.

Adrian Marcel: I think just the signs of the world and how thing work. Sometimes we try to force so much. We put too much pressure on ourselves. When I was working on “7 Days of Weak” with the squad, there was no pressure, other than get out of the basement. That was the only pressure. In doing so, all you can do is completely focus on the music and the sound. There was nobody waiting and watching. Now you have opinions, the fans that want more or want something different. You’ll never be able to match that type of project. Even when we first met Saadiq, it was just an organic situation. Nothing was planned or mapped out. Being from Oakland and The Bay, we were able to take that legend and that history and add it to something new and present. Just kind of meshing the two styles. I think since we’re both from Oakland, it’s not too much different. The sonics, the grooves, how we move. A lot of us, there is so much talent here even now. We have this natural connection. The Bay has an issue with being able to put ego and pride down and the levels of clout down and just get to work and do dope music. L.A. is able to do that. All of the artists you see from there do it more. I think that was the biggest part of it for me that meant the most to me, to be able to connect with history of where I’m from. I think that mattered more than I think the music itself.

YouKnowIGotSoul: We can’t help but think if you had come out in an earlier generation, you would have been one of the biggest stars. Do you ever feel like that?

Adrian Marcel: I say that all of the time. If I would have come out in the 90’s, it would have been a wrap! *Laughs* But I don’t want people to take it as that’s me dwelling on the what could have been. I love where my career is at. I’m not in control of it, there is a higher power. I believe in God and I believe that everything that happens, happens for a reason. Who knows what that would have meant for me. I know that love music, I’m good at it, and for as long as it’s about the music and as long as I just love it and not so much myself, I think that everything works out how it’s supposed to.