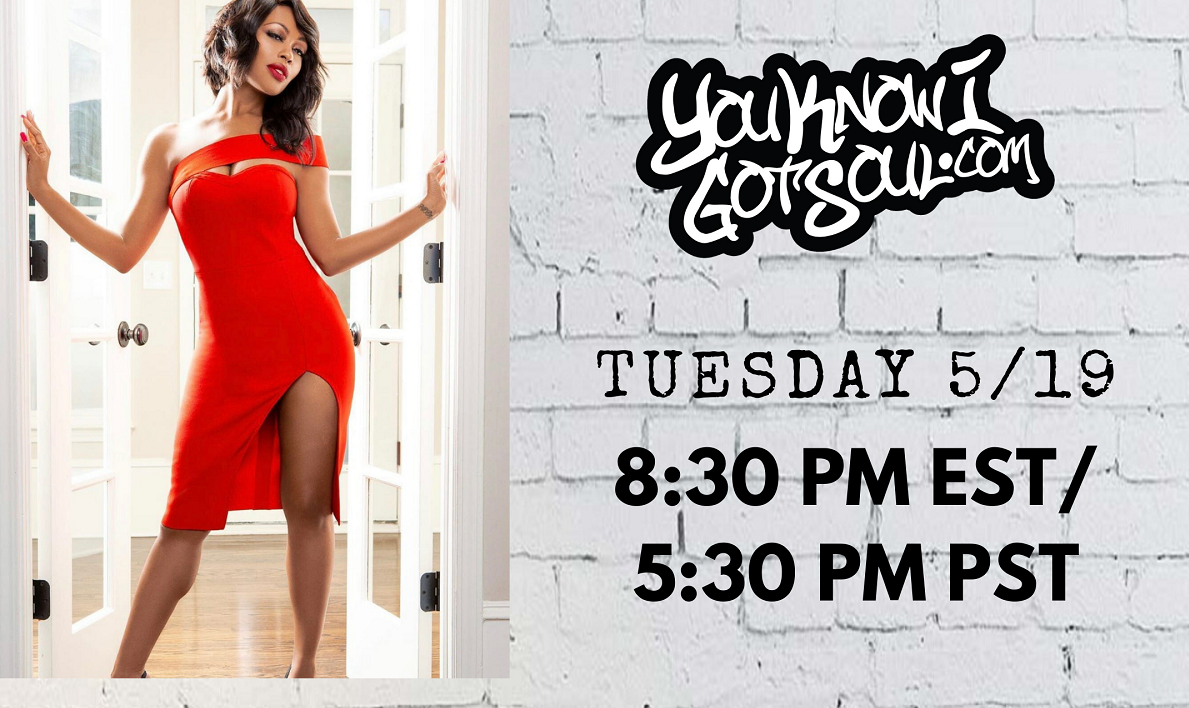 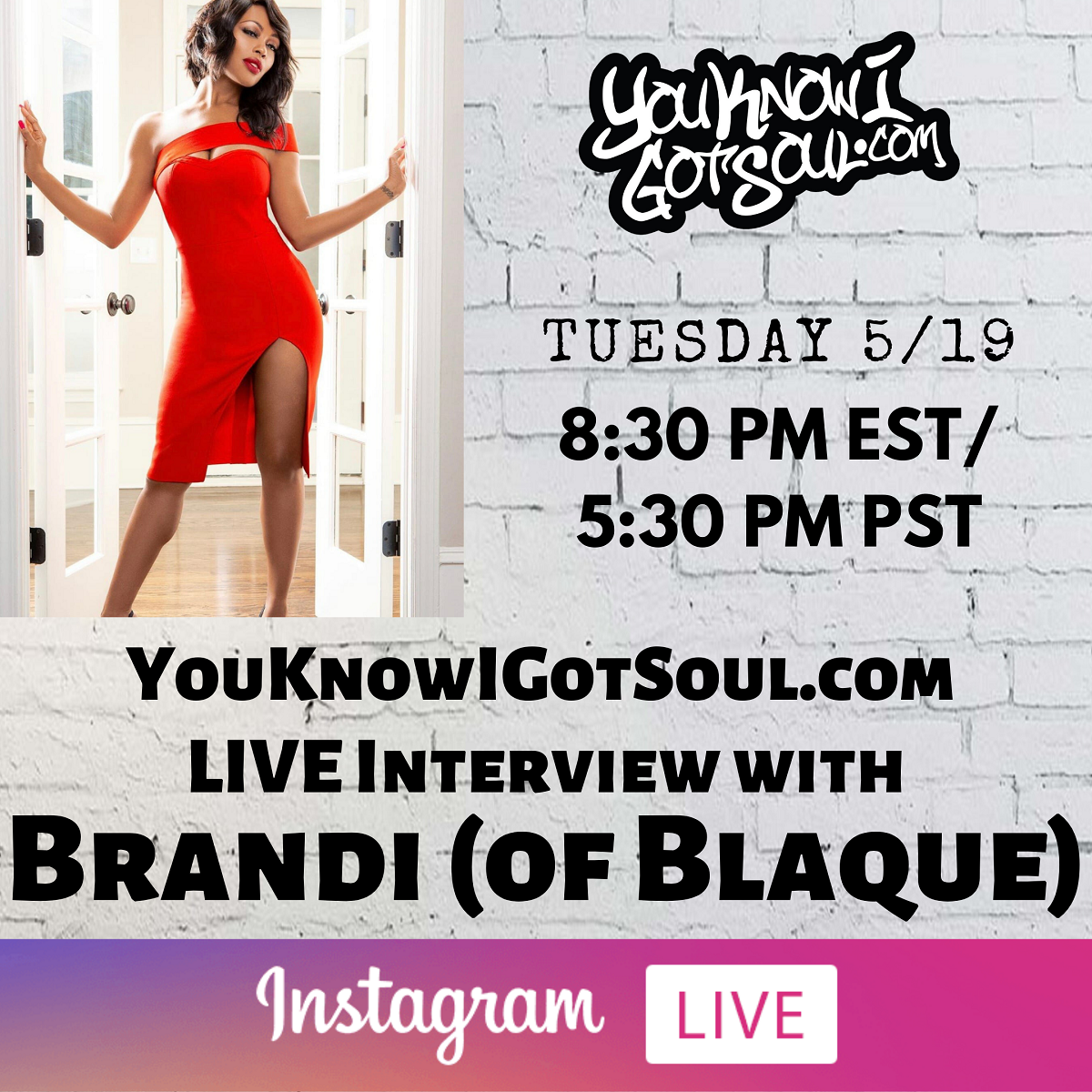 We recently caught up with Brandi D. of the R&B group Blaque for an interview on Instagram Live. During our conversation, we talked about the finally released “Torch” album, memories of Natina Reed and Left Eye, new music from the group in the future, and much more.

YouKnowIGotSoul: Blaque finally released the long awaited “Torch” album last year which had been unreleased for many years. We had been waiting since 2003. Talk about putting the album out.

Brandi D: We were so happy to be able to give our fans what they’ve been asking for, for so many years. “Torch” was all they wanted to hear from Blaque. 20 years last year, it was our anniversary of the group. Shamari and I wanted to do something special for our fans. We thought it would be great to just put “Torch” out to celebrate the anniversary. Our fans were so happy and so were we. It went #3 on the iTunes charts the first day.

YouKnowIGotSoul: What do you think kept people so excited about having that album come out?

Brandi D: I think our fans knew this was pretty much the last label album we did with Natina. I guess they just love the songs. *Laughs* It’s just dedicated to Left Eye, so it’s a special project. The fans should have it, and they can get it now.

YouKnowIGotSoul: You guys were discovered and groomed under Lisa “Left Eye” Lopes and went on the “Fan Mail” tour with TLC. Take us back to that era.

Brandi D: We were able to be on tour and just see the fans. Just to see the show that TLC gave, they gave such a great show. The music, they took it from the first album to leading up to “Fan Mail” at the time. It was just the body of work that they have and the legacy of music is what makes them who they are. We just always wanted to achieve something like that.

YouKnowIGotSoul: What were the early sessions like with Blaque?

Brandi D: We spent the night in studios, we’d fall asleep in studios, we’d go in at night at come out the next morning! *Laughs* We put a lot of hard work into creating our first album, and with everything we do, we try to make it great. We want to be proud of what we’re putting out to the world, you don’t want to rush that.

YouKnowIGotSoul: Reflect back on the first Blaque album. The subject matter on the album was so diverse and touched on topics not many artists were singing about.

Brandi D: We really young but very mature for our age. We wanted to talk about real issues. We wanted to talk about unity, because Blaque stands for “Believing in Life and Achieving a Quest for Unity in Everything”. In our music, with songs like “Rainbow Drive”, we just wanted to bring people together and show unity and love for everyone. I think that’s what we try to do with our music and what Blaque stood for.

YouKnowIGotSoul: You had two massive hits with “808” and “Bring it All To Me”. Take us back to that era as a young singer having hits on the radio.

Brandi D: I remember first hearing “808” on the radio. I was in my bedroom on my phone like a teenager would be, I had the radio on. It starts playing and I was going nuts and screaming! I hung up on whoever I was on the phone with. It was crazy. I remember knowing that BET was going to debut “808” the video. So my family was around the TV waiting for it to come on. It was just a beautiful moment and surreal.

YouKnowIGotSoul: The remixes that you guys did for “808” and “I Do” were amazing.

Brandi D: Thank you! “808” remix was huge for us on the Pop side of the world. We were always trying to be Pop princesses. Trackmasters did that, it was amazing. We were lucky to just have great songs that people loved.

YouKnowIGotSoul: You also had the “Bring It All To Me” remix with JC Chasez of N’ Sync.

Brandi D: N’ Sync was right on the tip of that explosion, and we were just so lucky to know them! We spent a lot of time with them before we toured with them. We had the same manager and used to hang out with them in Orlando. We got a chance to know them before we got on tour. Once we started touring, it became family. A fun fact is that Justin was actually supposed to do it, but he couldn’t because he was filming something. So we went to JC and he was glad to do it. We loved the guys, it didn’t really matter who it was on the song. We were blessed to have him on there.

YouKnowIGotSoul: Talk about the second Blaque album “Blaque Out”. You guys had such growth on that album.

Brandi D: That is probably my favorite album. We were definitely in a different space. We had come from being these young girls in the bubble wrap and all of that, and then second album we were getting sexy! The label really gave us a lot of freedom on the songs and choosing what we wanted to talk about and what we wanted to say. We kind of really took that executive producer role very seriously and we created a great project.

YouKnowIGotSoul: Was there ever a video for your single “Can’t Get It Back”?

Brandi D: Yes there was. The video actually, you can only find snippets, but not the whole video. I’m planning to call Sony Music and have them send me all of my videos! *Laughs* I would love to have them, just to have them in my vault.

YouKnowIGotSoul: For those who haven’t heard the “Blaque Out” album, what could they take away from hearing it now?

Brandi D: I would say that just know we were in a space of growth. We wanted people to know it was our second album, we are here to stay. Now we are getting deeper into who we are as women and individuals. I think people would hear that in the music.

YouKnowIGotSoul: How frustrating was it for you guys that the “Blaque Out” album was shelved at first?

Brandi D: It was a little discouraging, because of the work that was done. But the blessing was that we weren’t without a label or not making music, for long. We were over at Elektra within months, and we were able to start working on “Torch”, and then “I’m Good” came out from that.

YouKnowIGotSoul: You had that single “I’m Good” on the Honey soundtrack. Bring us back to that moment.

Brandi D: It was great. We were able to work with Missy for the video, and Jessica Alba was in it too. The song is dope, people love that song. We didn’t know that song was going to be what it was. Rodney Jerkins produced it, so when you get a song from him you know it’s going to be dope. Then LaShawn Daniels, God rest his soul, he produced our vocals on that record. You can hear. Shamori and I are singing our butts off! *Laughs* He knows how to pull the magic out of you. It was such a great record and it lives on until today.

YouKnowIGotSoul: Let’s talk more about the “Torch” album. It was definitely different from the first two, and showed more of the group.

Brandi D: I wanted people to hear that we are a group, but Shamori is this, Natina is that, and Brandi is this, and this is what makes up Blaque. I think we wanted people to know us as individuals but with the foundation still of Blaque. With a song like “Fall Through”, you got to hear my vocals and me expressing how I was feeling at that moment. I think it was great. We were actually grown by that point. Natina was a mom. We were definitely grown women and we wanted our fans who were growing up with us to be with us with our experience.

YouKnowIGotSoul: Blaque went on a hiatus recording “Torch”, and eventually you ended up on the Nelly record “Grillz”. How did that all happen?

Brandi D: Nelly and I were friends. He called me out of the blue one night and said he needed me to be on the song. We made it happen. It was a great experience and I got another hit record out of it.

YouKnowIGotSoul: Fast forward back to around 2011 and you were launching a solo career. How was it now being a solo artist after being with a group so long?

Brandi D: I think I just was ready to make music I was feeling. It didn’t matter to me if it was solo or a group moment. I’m ready to make music that I felt and I wanted to share it. It was supported. My sisters definitely supported it. Whatever we decided to do apart from Blaque, we always knew the foundation was always Blaque, so we supported each other.

YouKnowIGotSoul: We had heard one single, but did you end up recording more solo material?

Brandi D: I was listening to some of it the other night, and decided I’m going to start putting some of it out. The world needs to hear it. There is music coming, lost files of Brandi! *Laughs* You will hear them one day I’m sure.

YouKnowIGotSoul: We had interviewed Natina a short time before her passing and she was so excited about a new Blaque album you guys had been working on. Talk about that.

Brandi D: We were recording an album. We were recording not just music but a show. Things were moving in a great direction for us, we were all excited. We had been apart from each other musically, but not as a family. We were ready to get back and do our thing. It was an exciting time, it really was.

YouKnowIGotSoul: We need to celebrate Natina Reed more. Talk about her as a creator.

Brandi D: She was Blaque’s first writer. The songs we sang on our demo to get our deal with Sony Music were songs that Natina wrote. She was our first writer and she had always had this vision for Blaque musically and also fashion wise. She was definitely a creative, her mind was going so fast! She was just brilliant really.

YouKnowIGotSoul: Talk about your own creative process.

Brandi D: I plan things out more than Natina. I think with me, I have to process it and take a minute to see the vision.

Brandi D: Since you guys have “Torch”, now we can put new music out! That is the plan. Actually before the pandemic, we were in the process of that. Slow motion right now, but we will get back to it and that is the plan.

YouKnowIGotSoul: What will Blaque’s sound be like with new music?

Brandi D: We will just stay true to who we are. That is very important to Shamari and I. But we are also here 20 years later. We have a lot of life experience to talk about, including heart break. We have a lot to celebrate and be happy about as well. You will hear the story of Blaque at this point. Now it’s time to share the story and tell you who we are and how we got here. That’s what we want the world to hear now.