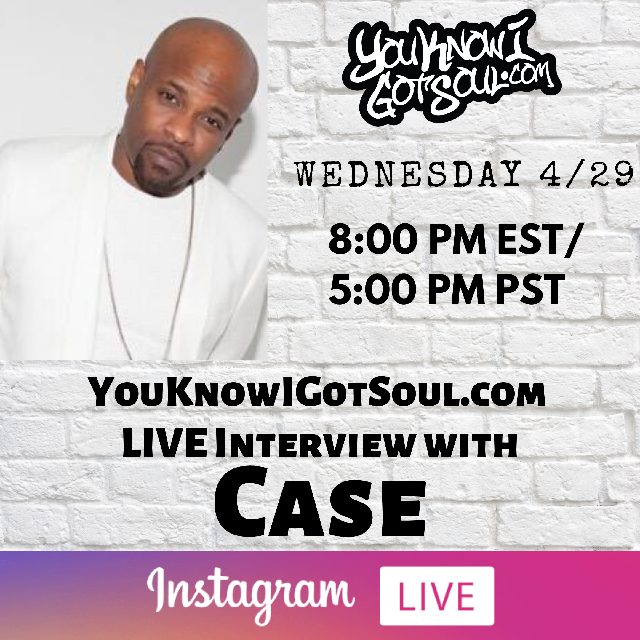 Legendary singer Case joined us recently on Instagram Live for an exclusive interview. During our conversation, Case took us through the creation of each of his albums, reflected on his time as a songwriter and how he got signed, and gave us the scoop about new music he’s got coming out. Check out what he had to say below and in the video.

YouKnowIGotSoul: You’ve created some of your best work over the past few years as an independent artist with “Heaven’s Door” and “Therapy”. Really, you’ve just been so consistent your whole career. How have you maintained that?

YouKnowIGotSoul: What do you remember about making the “Therapy” album?

YouKnowIGotSoul: You started off your career as a songwriter for other artists? How did that happen?

Case: The first check that I ever got in the music business was 30 years ago. I co-wrote “Make it Right” on the first Usher album. Then I co-wrote Christopher Williams “Where Are You Now”, which was in about 1991 or 1992. So that was my start. I did the melody for Al B Sure for “You and I”. That was the beginning of everything.

YouKnowIGotSoul: How did that lead to you getting signed?

Case: I think it just put me in the right places. What I did was, I had a song that my manager at the time got Faith Evans to write for me called “Don’t Be Afraid”. Russell Simmons heard it and he signed me off of that song. And, I’m the last artist that Russell Simmons signed personally to Def Jam. LL Cool J was the first and I was the last. They need to have that on jeopardy some day!

YouKnowIGotSoul: It’s interesting to think about Faith Evans writing the song for you, because we don’t hear a lot about female songwriters writing songs for male artists these days. Especially being able to write from a man’s perspective.

Case: The only thing that bothered me was that her tone was way higher than mine, so I had to figure out how to sing the song. Honestly I always have a problem when women write a song for me, because I try to find where to put it so that it still sounds good but to keep the integrity of the melody. But they can write for men, because we’ve put them through so much stuff, they can definitely do it! The same way Babyface and Ne-Yo can write from a female’s perspective, they can definitely do that. I’m not worried about that part. I think it happens more often you think, you just don’t know about it! You’ve got to read the credits.

YouKnowIGotSoul: Talk about your self-titled debut album and what you remember about creating it.

Case: I remember I’ve always hated that album. It was more so that I had the songs written for years before hand. It’s like there were so many hands in the pot that I wasn’t exactly clear on how to executive it. I couldn’t express myself the way I wanted to. People don’t realize I was signed to Spoiled Rotten Records, so when you’re signed to someone else, the music comes from me, it has to go through them and also Def Jam. That’s kind of hard to get your vision across. At that time I wasn’t even sure what my vision was.

YouKnowIGotSoul: Following that, tell us about creating “Faded Pictures” with Joe.

Case: Joe is my guy. The biggest thing I remember is shooting dice in the hallway while making the song. Joe won about $10,000 from me that night! I just loved the melody, the keys that Josh Thompson played, the bassline. I love the whole groove of the whole song and I felt like it fit me perfectly.

YouKnowIGotSoul: Was your second album “Personal Conversation” more of your style?

Case: Yea, at that stage of my career, I was gone from Spoiled Rotten. It was just me and Def Jam, and they allowed me to go and make whatever I wanted to make. That’s why that album was a lot different from the first album.

YouKnowIGotSoul: That album had one of your biggest hits “Happily Ever After”. Talk about that one.

Case: That is my favorite album. It was just the producers I worked with. We bonded as people before we started making the music. Me and Redhead Kingpin, Tim & Bob, and Jimmy Jam & Terry Lewis. We had a chemistry that you came into the room and you could feel it. You didn’t have to hear any songs, you could feel the vibe of us in the studio making music. You knew it would be special. Each song was about a different person in my life.

YouKnowIGotSoul: Tell us the story about “Missing You”. Joe did the song first, but how did you end up with it?

Case: Tim & Bob did the record, and at time I didn’t know that Joe had recorded it. They played the demo for me and the demo was of Joe singing it. So just recording the record, I had laryngitis and the flu! I got to L.A. on a Sunday night and I lost my voice on Monday. The whole week kept going. We got to Friday and they said I couldn’t do the song if I didn’t do it that day. I went in and sang the song two times. I told them I couldn’t talk. I sang it one time and sang it again. They merged the two takes together. What’s crazy is the night before that, I did “Livin It Up” and both songs got nominated for Grammy’s!

Case: That was supposed to be the third single. That’s Jazz of Dru Hill on the background vocals. It was a lot of politics that went on that prevented it from becoming a single. That’s what accelerated me leaving Def Jam. I left on my own when I was working on “The Rose Experience” album.

YouKnowIGotSoul: We also really liked “No Regrets” with Charlie Wilson on that album.

Case: What’s crazy is there is a song that Charlie Wilson told me specifically that he wants me to remake from the Gap Band. I’ve got to do it, even if I didn’t want to! I can’t tell you what song just yet though!

YouKnowIGotSoul: Tell us the story again about the LL Cool J song “Luv U Better” and how you were originally part of that song.

Case: It was a song that Pharrell did. It was originally Me, Donell Jones and Usher. We were each going to do a chorus. We went to the studio and it ended up just being me and LL Cool J. Once it went through the whole label system and politics, they just kept the demo. I still have it though!

YouKnowIGotSoul: Talk about “The Rose Experience” album. Why was there so much time between that and your previous album “Open Letter”?

Case: I had been working on that album for a while. But once the “Conversate” situation happened, I stopped loving the music. So, the business of music took away my love for music. Two things happened. My grandmother passed in May of 2009 and then Michael Jackson passed in June of 2009 and those were two of my biggest influences. That kick-started things back for me and I started listening to songs I liked as a kid. So that’s how I got back to working on that album.

YouKnowIGotSoul: That’s another album that could have been way bigger. “Lovely” was a great first single, and “Déjà vu” would have also made a great single.

Case: “Déjà vu” was supposed to be the first single. I was still on Def Jam and we had done “Shoulda Known Better” with Ghostface Killah and “Déjà Vu”. The plan was those two songs and then put the album out, but it didn’t get to that. That was the first album where I had produced songs. I had always written on albums. That album was completely I could do whatever I want. I could have done a classical song. That was the first time I ever experienced that. It was kind of scary but cool.

YouKnowIGotSoul: Take us back to the Def Soul era at Def Jam being with so much talent at the label.

Case: My fondest memory was all of us working on “Love Sets U Free” with Kelly Price. We had me, Montell Jordan, Playa, Dru Hill, LuvHer. All of us together on one song. Teddy Riley produced it and we were all together in the studio at one time. We did a lot of work together. Montell Jordan’s “Let’s Ride”, I arranged the song and sang backgrounds. I also sang on the remix to “Beauty”. We al got on each other’s records and helped each other out. That was the closest I’ve ever been to Motown.

YouKnowIGotSoul: Tell me about the “Here, My Love” album.

Case: I had nothing to do with naming it, let’s start there. It was supposed to be a mixtape. I got all of the tracks on a Sunday. I wrote them all with Suice on Monday, and recorded them on Tuesday. I didn’t realize what was going to happen with that. I would never have named it that. It is what it is.

YouKnowIGotSoul: Take us back to creating “Heaven’s Door”.

Case: I was trying to get back into my groove and figuring out what I wanted to sound like. That album was a proving ground for me. I actually have a special place for that album.

YouKnowIGotSoul: How do you view your own legacy?

Case: Here’s how I look at it. I feel like good music stands the test of time. If you notice, over the past five years, my songs have been sampled no less than 15 times. I feel like good music will find it’s way into the public. I’m still making it. That’s just how I look at that. I feel underrated but it’s cool because I didn’t make music to sell records. I wanted music that would last. To make songs that would get sampled the way they are. I got a sample request today for “Touch Me, Tease Me”. I can’t be mad at that.

YouKnowIGotSoul: What can we expect new from Case?

Case: I’m working on two albums right now. One of them is a conscious album and one of them is a regular album about love and relationships. We’ll see how it comes out, trying to put them together. I wanted to do the conscious album because with black music, there are certain things we’ve always had, which are party records, fun records, sex records, but we used to have somebody that was talking about what’s really going on in our community. I’m with the party and sex records, but I think it needs to be balanced. It’s been on my heart for a while. Also, me and Salaam Remi did a song. We got a dope song that will be coming to you soon.