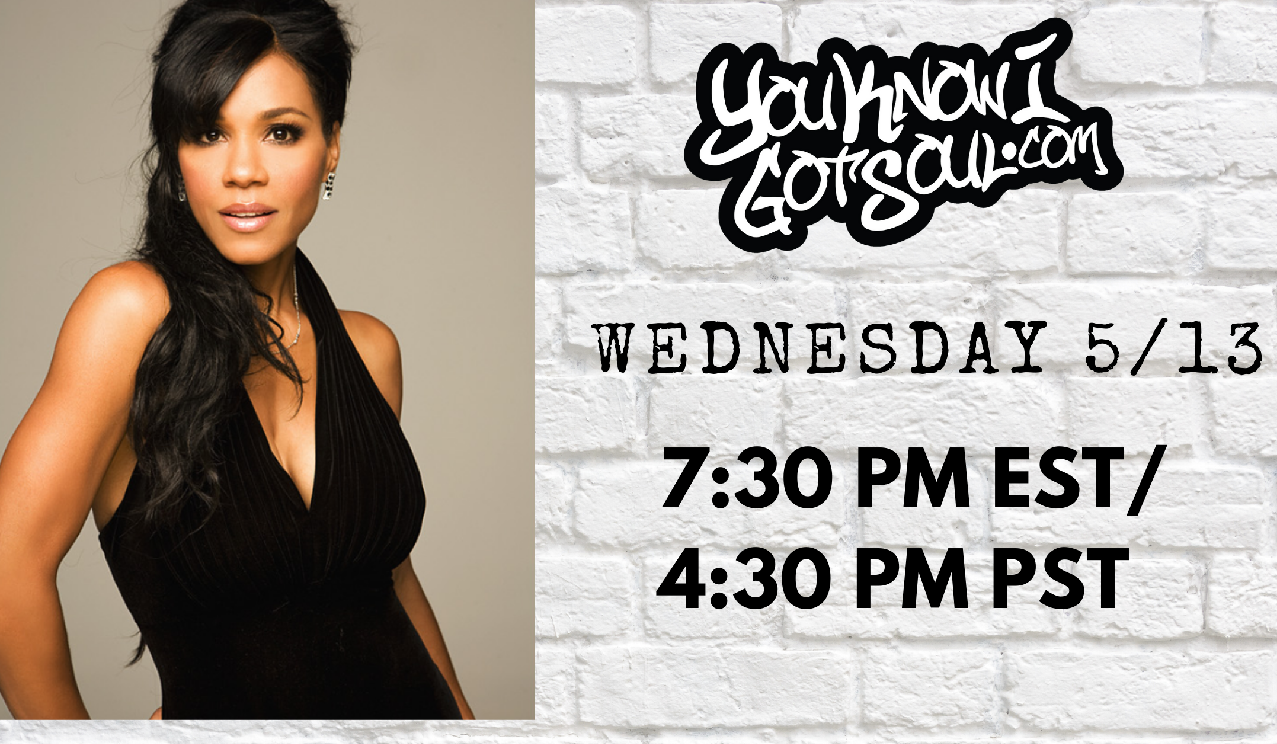 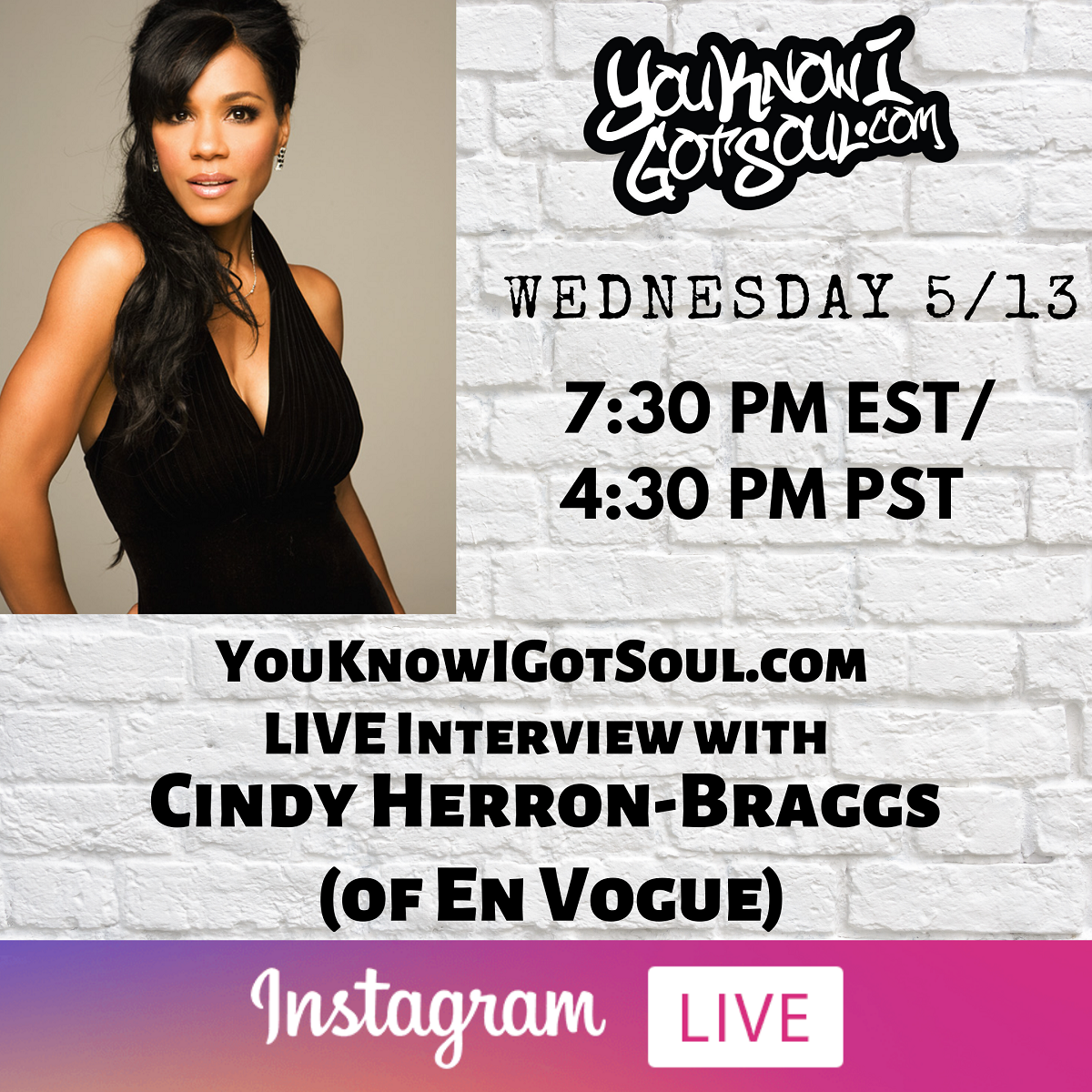 We recently caught up with Cindy Herron-Braggs, one of the founding members of En Vogue, for an interview on Instagram Live. During our conversation we touched on memories of the group’s debut album “Born to Sing” as it’s reached it’s 30th anniversary, the success of En Vogue over many decades, the group returning with the album “Electric Cafe” after a long gap between projects, the story of how the group originally formed, and much more. Check out what she had to say below!

YouKnowIGotSoul: This year is the 30th Anniversary of En Vogue’s debut album “Born to Sing”. What do you remember about creating it?

Cindy Herron-Braggs: It was an exciting time for us because it was our first project together. We’d spend a lot of time with our producers Denzil Foster and Thomas McElroy listening to music, talking about direction, writing, kicking around ideas. Our producers invited us to co-write with them which was unheard of for an artist’s first project. That project was a reflection of all six of us; the four girls and two producers. Just bringing together our life experiences and putting it into music. Bringing together social awareness topics we felt connected to and putting them to music. It was a very exciting time for us.

YouKnowIGotSoul: What was your contribution to the creative process?

Cindy Herron-Braggs: We would have about six hours studio days, five or six days a week. Really it took us about 3 months to do the entire project. The producers would be creating music tracks during the process. Every time they would have a track, we would listen to it, they might have an idea on the melody for the hook, or a subject. They wanted us to write a verse we’d sing or write the whole song together. It was a lot of listening to tracks and writing together. Sometimes we’d record stuff and after we heard it didn’t think it would work, so we’d throw it out and start again. It was a lot of fun. We were young and giddy, us girls. So sometimes honestly, we didn’t get very far creating because we’d go into laughing fits! Somebody would just do or say something funny and we’d just lose our composure and we couldn’t work after that! They’d send us home and say come back tomorrow. We had some really fun moments.

YouKnowIGotSoul: As you went to create the following En Vogue albums, how did you approach them? Your debut was already a classic.

Cindy Herron-Braggs: We felt the most important thing is to lay the foundation and find the signature sound. We are all evolving people so just to continue to do what we did in the first place, which is put our life experiences into music. Just allow the evolution process of who we are to continue. It was necessary to sit it all on the foundation we established, which was the signature harmonies, the grooves that our producers came up with, and to make sure each vocalist continued trading off singing lead. We set that standard where we all sang lead and nobody became the sole lead singer. We tried to just continue with the formula and evolve it.

Cindy Herron-Braggs: That was a long project. It took a long time to get it done. I want to say start to finish a year and a half. It was different this time. We recorded it not in a studio, not in a recording booth, but at Denzil Foster’s house with a computer and microphone setup. Everything was done on his computer. It wasn’t like we started in the beginning. In the writing process, we did a lot of writing, and it was our life story and things relevant to us. We over wrote and when we thought we were done, we figured out we weren’t done. We kept going back to add something that was missing. I will say it was an easier process than in the beginning. Just because recording has evolved from what it used to be. It’s digital now and it used to be analog.

YouKnowIGotSoul: You had the hit single “Rocket” from this album, which really proved that En Vogue could be successful in so many different decades.

Cindy Herron-Braggs: It meant a lot to us. This many years in the game, there’s not a lot of artists that can continue doing what they love for so many years. I would have never thought. Our first single came out in 1990. Back then I would have never thought we’d still be performing or recording in 2018. I guess I’m really happy that our fans jumped on board. Over the years there have been a few different configurations of the brand En Vogue. It just showed we still had a good fan base and they were willing to accept new music from us and continue to support. It felt really good and like a blessing.

YouKnowIGotSoul: It had been so long between albums until you released “Electric Café” in 2018, and many r&b fans didn’t even know if En Vogue would release new music. What was the journey like to releasing that album?

Cindy Herron-Braggs: It was really easy. We had been out touring and doing a lot of work. Fans had been asking us when we’d release a new project. So after so many people continued to ask, we said we’d just do it. Then it was just finding the right partnership which was a bit of a journey too. It’s not for us signing to a major record label, wasn’t the way we wanted to go. The whole record industry has changed so much. So many artists are either doing it on their own labels and partnering with a distribution company. So we had to find out which distribution company, because we definitely wanted to do it on our own label. It was that aspect and then it was also we had to make sure there was money to promote it and see if we could get our distribution company to put money into a video. For us, we didn’t want to just release a single without a visual. In the past one of the things that has been such a big help to music and the sale of it and to the way that it sits with a listener and fan and lasts in their memory is the visual. When you have those together it’s a winning combination. There was that whole aspect of it. We found a director and a concept. It was distribution, music, video.

YouKnowIGotSoul: En Vogue has been through some lineup changes over the years. What is the biggest challenge of staying together as a group?

Cindy Herron-Braggs: Terry and I are the original two founding members. So the first thing for us is to be united in what the vision is. Not just short term but long term. You grow up, you evolve, and your individual vision for your life can change. When that happens, for us it’s like how are we going to keep the brand moving. Are we willing to incorporate a new member or two if that’s necessary? So for us it was necessary. We’ve got a fan base out there that loves En Vogue. Our two former members have their own very big fan base. The fans wanted the group to continue on and not fall apart. So they were willing to accept new members. The other thing for Terry and I and Rhona Bennett who is our current member, we love doing what we do. We love performing, we love engaging with our fans, we love writing and creating new music. So as long we still have a passion for it and somebody wants to still see us come out and perform or hear new music, we’re willing to do that. It’s a labor of love and that’s really it.

YouKnowIGotSoul: What can we expect from En Vogue in the future?

Cindy Herron-Braggs: Initially we had tours planned for the 30th anniversary but that started evaporating with everything going on. We don’t know what the future of touring is right now. What we’ve been doing is connecting and taking advantage of social media to connect with our fans. We have launched The Funky Divas podcast. That’s really just sitting down and sharing our journey with our fans. Sometimes the story within the story you may not have heard. One of the other things we are doing is the re-release of our “Born to Sing” album. That’s something we are sharing.

YouKnowIGotSoul: Can you share the story of how En Vogue was formed?

Cindy Herron-Braggs: Our producers had a deal with Atlantic Records to form a girl group. They had a call and wanted a three girl group. It was the common number. So Terry Ellis and I had a mutual friend in college in Texas, this friend told both of us about the audition. I lived in the Bay Area, so I went on the day of the audition. It was me, Maxine, Dawn, Terry, and another young lady. Terry flew in later by the way, her flight was delayed. For the other four of us, they had a song they had written and had the track recorded and wanted us to record the song on the spot, and we had one shot to sing lead. Each of us went in there and did our best to sing lead, and laid background vocals. Then later Terry got there, and I took her out to my car and went over the song with her. She went into the recording studio and did her thing. After that we added background harmonies and that was it. It was probably two or three weeks later, we had all gone home, and we got the call from the producers that we made it into the group. They decided to keep four of us instead of three. They really liked our vocal harmonies and chemistry but also the personality chemistry. They felt we had the look. They told us we made it into the group, and we were over the moon. I didn’t think I was going to get in. When I heard Max and Dawn and Terry go in and do their thing, they were so soulful and good, right on the spot. I felt like I wasn’t going to make it. I was really surprised.