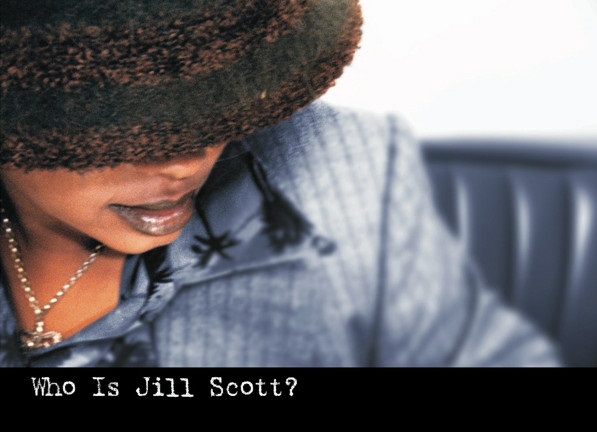 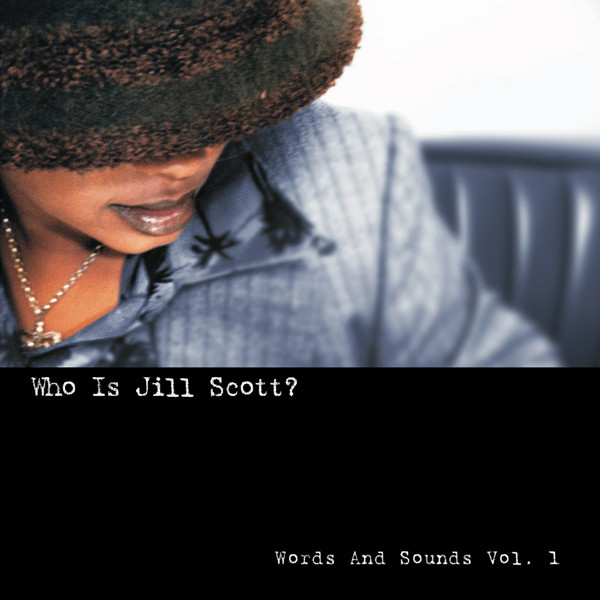 2000 was a monumental year for the Philly Soul sound. DJ Jazzy Jeff had been compiling and developing a talented group of artists, producers and songwriters at his A Touch of Jazz Studios in Philadelphia in the years leading up to this.

The culmination of their work reached a pinnacle on July 18th, 2000 with the release of the debut album “Who Is Jill Scott? Words and Sounds Vol. 1” by Jill Scott. The collective at A Touch of Jazz had placed records on artists such as Tatyana Ali and Kenny Lattimore in the years prior, but this body of work was almost entirely created by them.

There is no doubt that this is a classic album that has kicked off a legendary career from Jill Scott over the past two decades. The singer was no overnight success and the stories behind the creation of the album and her journey are very fascinating.

Jill Scott was a poet and spoken word artist who had already made a name for herself on the open mic scene. This allowed her to be discovered by legendary Philly band The Roots and eventually work her way into A Touch of Jazz studios.

Through interviews over the years with a majority of the producers involved in this album, we’ve been able to get some history of Jill’s beginnings as an artist and how this album even came together. Here are some of our favorite quotes:

Working with Jill is amazing, just her personality, she’s just a real down to earth girl and sweet person and she’ll say what’s on her mind. We had this spot and we used to play there every Tuesday night. It was open mic so there was a whole bunch of musicians. Jill used to come and do poetry and we used to do music, but she’d just do poetry over the music, we never heard her sing. Long story short, Jazzy Jeff was telling us about this girl he wanted us to meet. He brings her to the studio. Next thing you know, we cut “Long Walk” and “The Way” and “Getting in the Way”. Those were her first singles, we cut them in a week. – Vidal Davis

The one thing I love about her is, it was always a conversation. Every dope song came from some kind of conversation. She wasn’t just picking tracks. It was like we were talking and laughing, and then you hit something on the keys, and she’d like it. Then you build on it and it grows. Then you go into the booth. Then you have the song. That whole album, that’s why it’s called “Words & Sounds”. She would just pull out her poetry notebook and go in and do something she wrote long ago. Next thing you know she’s singing something dope. – Keith Pelzer

Jill Scott is a star. She is full fledged. We knew exactly for a fact that she was going to be everything that she is and everything that she is now. Her persona was huge and watching her come into the studio and just be humble and willing to be there as well as coming with her book of poetry. She was just open for creativity and suggestion and ideas. – Carvin Haggins

I think one of the best things was those first 8 or 9 songs that we recorded with Jill Scott. She wasn’t signed to a label. Someone didn’t tell me to do it. Jill was dope, she came into the studio and we made songs. What I did that was different than what was different than what most people used to do, I bought a CD burner and I pressed up maybe 150 copies of the first 9 songs. I basically gave it to everybody who I felt loved music. That’s what got the word out. It was like check this out. I had a friend over at Sony Music, who told me everybody in Sony was playing Jill’s demo because they thought she was signed to Sony! – DJ Jazzy Jeff

Jill was super cool, she was one of the best things that happened to A Touch of Jazz. When Jill came in, she contributed immensely to that sound. It was a mutual labor that allowed those songs to be special. She definitely had a unique approach because she was also a poet and actress. Her energy was not so consolidated into this R&B thing. Jill was a poet at first. – Ivan Barias

Jill eventually got signed to Hidden Beach and the rest is history.  Here is our track by track breakdown of “Who Is Jill Scott? Words and Sounds Vol. 1”. 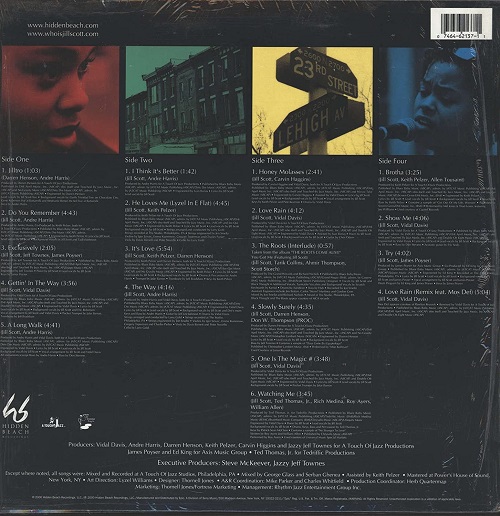 A uniquely crafted intro that includes multiple meshed together sound bytes meant to immediately answer the question asked in the album title. Jill takes a moment to introduce herself as a poet and describe her inspiration.

2) “Do You Remember” (Produced by Andre Harris)

The album kicks into gear with the soothing and soulful first song. Jill shows off her beautiful vocals as she reflects on a previous love.

Jill taps into her poetry book for a spoken word piece that effectively serves as an intro to “Gettin in the Way”. We’re already seeing multiple sides of her artistry. She’s also not shy about showing off her sexual side.

Most of us got our introduction to Jill Scott through her debut album’s lead single “Gettin in the Way”. This is a song that fully exudes Philly Soul and really made us pay attention to Jill. The lyrics of the song provide a beautiful contradiction to the soulful backdrop. The video for the song is extremely captivating and showed us we had a sensation on our hands unlike any other at the time.

Next up is the album’s second single and finds Jill telling her man what they can do once they get past the drama of the previous song. Another super smooth cut that helped define the album.

One of the standout qualities of this album are the beautiful interludes that flow perfectly between songs. “I Think It’s Better” is one we were certainly hoping could be a full length song!

This beautifully seductive song is a melodic love letter to Jill’s first husband. Although the song was not selected as a single from this album, it was later released via her live album “Experience: Jill Scott 826+” and has become a fan favorite through the years.

The album takes an uptempo turn with the fun and bouncy “It’s Love”. The horns and drums give the song a unique jazzy and funk feel. The vibe of the song can be summed up as the feeling you get when you’re in love.

We now arrive at the album’s third single. Jill slows it down on the sultry, romantic ballad “The Way”. She continues to show off her unique writing abilities and ability to turn a timeless love message into something fresh. Sonically this song has to be in the conversation among best R&B slow jams in the 2000’s.

The best way to describe this song is that it’s such a vibe. So easy to get lost in the enchanting production and seductive vocals which together make for a gem.

This was the initial song released from the project but never took off as a single. Another look at Jill’s poetic side which she gracefully showed off throughout the album. It’s fun to reflect on how much she has evolved from this point.

Next we reach a brief interlude to remind us of Jill’s affiliation with fellow Philly natives The Roots. You may remember she co-wrote their hit song “You Got Me” from a few years prior.

Did we mention that Jill Scott is very soothing and melodic on this album? “Slowly, Surely” is a nice example of that.

Things take a Latin twist on the next song and Jill even shows off her Spanish speaking skills. The song sounds nothing like the rest of the album but not so much it doesn’t fit.

Another unique song is up next. This song samples Roy Ayers “Want Me” and lyrically resembles a poem touching on the annoyances of big brother watching us. This commentary rings even more true 20 years later.

Jill takes things back to a more soulful and jazzy vibe on the inspirational and uplifting “Brotha”.

Things slow back down for another lovely ballad “Show Me”. The vibe of the track always took us back to a sound reminiscent of Mary J. Blige’s “My Life” album.

The album wraps up with the progressive sounding “Try”. The self reflective and autobiographical song gives us another look at Who Jill Scott is, a story she began telling on the intro.

Rapper Mos Def makes an appearance as the only feature on the album for a remix to “Love Rain”. This version of the song makes a nice companion to the original. 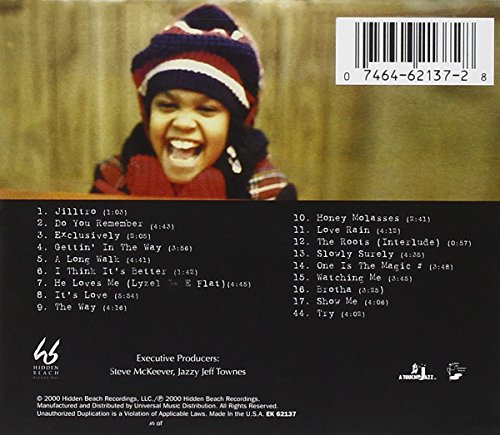 Taking the time to revisit Jill Scott’s debut album “Who Is Jill Scott? Words and Sounds Vol. 1” has allowed us to confirm it has stood the test of time as a classic. Not only is it a quality body of work from front to back, but it was unique at the time, and had such a powerful influence on the sound of music in the years that followed. When we revisit the legacy of Jill Scott, this will undoubtedly be looked at as the foundation of a legendary career. 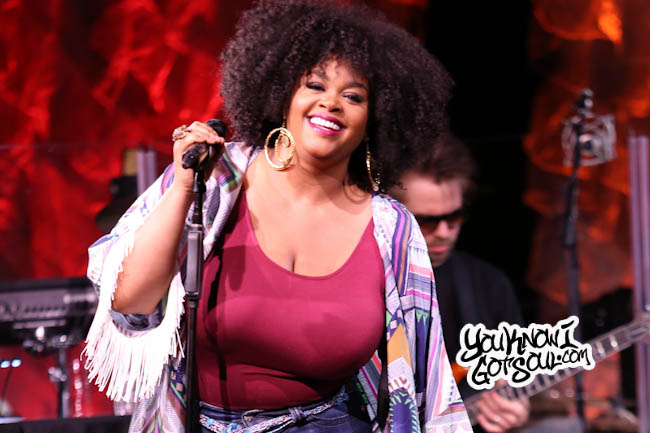