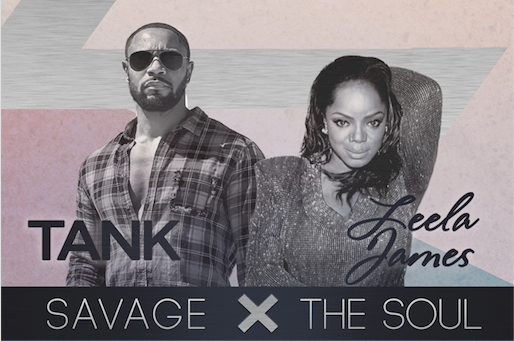 The R&B General Tank and the amazing soulful songbird Leela James are excited to announce that they will be co-headlining the “Savage x The Soul Tour.” The run kicks off November 13 in New York at the Playstation Theater and culminates on December 8 in San Francisco at the Historic BAL Theater.

Leela James has had quite the busy year, having toured with Maxwell, Ledisi, and Daley in support of her sixth studio album Did It For Love (BMG/J&T), released in May of this year. The album features the UAC chart-topping #1 single ‘Don’t Want You Back’ as well as current top-15 single Hard For Me and the powerful ballad All Over Again. In addition to releasing new music this year, Leela also welcomed a new baby and survived Hurricane Harvey in Houston, Texas. In early September, Leela assisted in gathering artists for a benefit concert to help victims affected by the storm.

Fresh off his 14-city “SAVAGE Tour,” Tank has finally unleashed his new album SAVAGE with much excitement from his fans. The 11-track LP features appearances by Candice Boyd, J. Valentine, Ludacris, and labelmate Trey Songz as well as production from Da Internz, Harmony Samuels, and Cardiak. Like the name, the lead single “When We” has aggressively moved its way up the UAC radio and Billboard R&B charts from being the #1 most added song three weeks in a row to now coming in at #5 with over 1.3 million streams. In addition, the accompanying video for “When We” (click here to view) had the internet on their toes. Tank also released singles “Savage,” “F It Up” and “Sexy.” Savage is currently available in stores and all digital retailers.