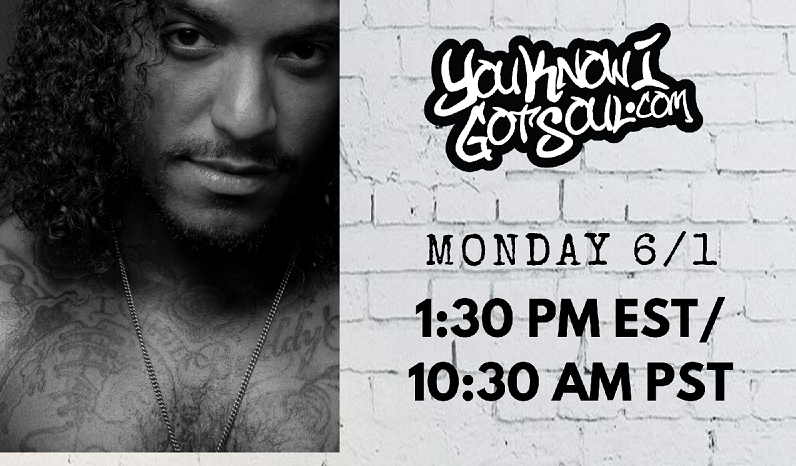 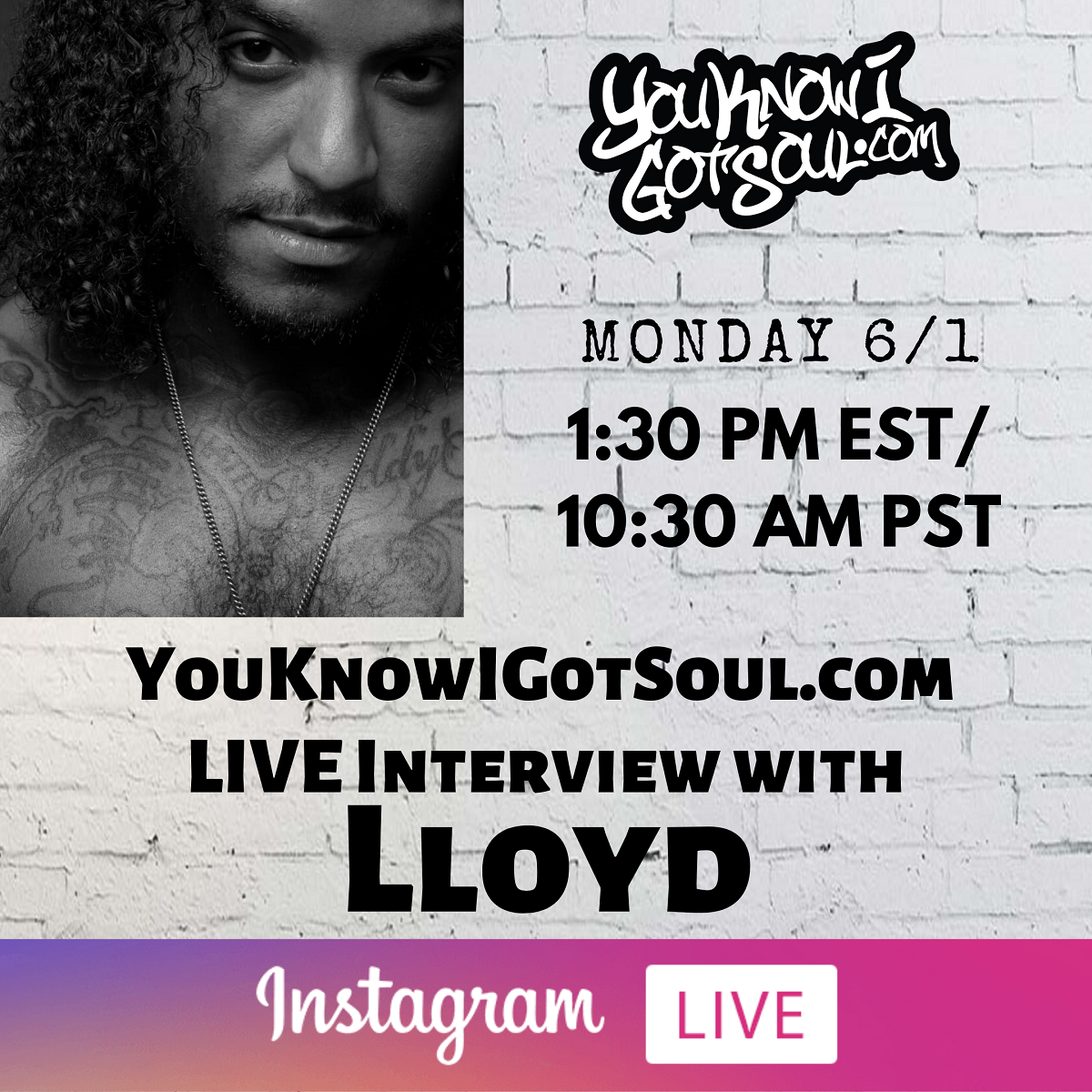 We caught up with Lloyd recently for an interview on Instagram Live. During our conversation, we touched on his new single “Slow Wine Bass Line” with Teddy Riley, his last album “Tru”, his growth as an artist, navigating the industry as an independent artist, memories of each of his albums, and what’s next.

YouKnowIGotSoul: Reflect back on your last album “Tru”. We love that album, you really showed growth, and it was your first offering as an independent artist.

Lloyd: First time doing something independently. The amount of pressure that you feel on your back and shoulders and mind and spirit increases exponentially. However, with that pressure also comes a sense of freedom and being able to take it wherever you imagine it to be. Trying to incorporate more. Bringing in the Spellman Women’s Choir which features my cousin, who I’ve watched grow up since a baby. I incorporated my son crying in the studio. Just trying to be creative with my life through the music. Then also the fact that I’d been gone away from recording for a couple years. It gave me a challenge to try and make it as personal and soulful as possible. Just trying to attack all of those different things. Keeping in mind if you break it you buy it. You have to assimilate the cost. Just trying to get more bang for your buck, quality over quantity. “Tru” was probably the cheapest video I ever shot. It ended up being the best video I ever shot, in my opinion. It captured a vibe I was looking for. That was an interesting project.

YouKnowIGotSoul: We had interviewed you a few years in 2013 and you were just trying to find your way as an independent artist. What was it like trying to figure those things out?

Lloyd: I think just trying to identify the opportunity in any situation. No matter how unfortunate, unplanned, or unpredictable or how difficult, there is always an opportunity on the other side. You just have to see yourself to getting there. A big thing for me was I had been releasing music through major companies since I was 12 years old, that was all I knew, and a part of me was dependent on other people knowing how to do things for me. By being in a major system for so long and to see and understand how things were working. How the radio game works, and the digital and recording side, and the live touring game. Really trying to get to a place where if I’m going to do it, I’m going to bet on myself. Really the hardest part of that was to get over the fear of failing. Putting forth more of your spirit to connect or not. I think that can be something that can exist in any artist person. Once you can get to a place where you don’t mind falling, then you can really start to move. That’s what it took for me to have to get to that point. I didn’t know it was a blessing at the time, but there have been a few moments when things seemed as one thing, but it turned out to be the perfect situation.

YouKnowIGotSoul: You just dropped this amazing song “Slow Wine Bass Line”. One of our favorites this year. Talk about the song.

Lloyd: It started off with a sample from a friend of mine. He was actually the engineer, just beginning out when I created “Tru”. He’d come to the studio everyday and carry this keyboard on his back. It was his way of being ready for anything. I remember the first time I met him, he asked a lot of questions. Then fast forward, over the past 2 years, he’s been sending me his own productions. They’ve been pretty good and getting better and better. When he sent me the concept for this song, immediately I locked into it and wanted to build it out. We wrote the song. That was an interesting experience because when I originally wrote it, the hook that is there now, was the verse. It took for my friend Jasper to tell me it was the hook. He said it sounded like Curtis Mayfield. We just created the rest of the song from that. Me getting Teddy on it was something I just manifested through putting it out there in the universe. I wanted Teddy on this. Really just through chance in the past 2 or 3 weeks, I was able to get Teddy to do the voice box on there. When he first sent it back to me, he had reproduced the whole record and the drums! I didn’t use it all, but he told me to take what I wanted. I went in and reproduced it, added the extended version on, and I love it. It’s one of my favorite accomplishments as a musician.

YouKnowIGotSoul: The extended version is crazy as well. Whose idea was that?

Lloyd: Not to sound crazy, but that was my idea totally! It was because growing up, I remember hearing music that lasted for 7 or 8 minutes long. A lot of my favorites have music on their albums, not just the short radio version. They let it vibe out. I thought this was a perfect opportunity because we don’t have anywhere to go right now. We can actually sit down for 8 minutes and listen to a song! I’m waiting for a remix from Teddy, he wanted to do his own remix of the song as well. I’m also going to release an acapella version of the song with Teddy’s voice box. The edits I made to the voice box don’t highlight the amount of work that he did underneath that track. There are all kinds of stuff going on, but I had to simplify it. It sounds like a whole different experience on the acapella.

YouKnowIGotSoul: Talk about the chemistry you have with producer Jasper all the way back to your first album.

Lloyd: Well Jasper is from Southwest Atlanta, I grew up in East Atlanta, and the first manager that I had also discovered Jasper, he used to be in a singing group. He came in and wrote some of my very first songs that I recorded as a kid at 10 years old. From that I just identified with his style, mentality and spirit. From there we just started kicking it a lot more. I was a kid, but he would let me come hang out with him. When I started recording with Dallas Austin, he was looking for a songwriter to help with a song. I told him I had someone real dope. I called Jasper and he came down and Dallas Austin fell in love with his talent and he offered him a deal on the spot. He of course would go on to song write a lot of hits for a lot of people. That’s been my ace since day one.

YouKnowIGotSoul: Watching your growth as an artist since “Southside” has been incredible. You’ve grown and matured musically. Where did you get the blueprint to continue making age appropriate music?

Lloyd: It’s two things. One is the fact that I record under my real name, so I don’t have an alias I can run behind. It’s just a reflection of where I am personally. But also, I just realized that in life, the same things that are cool to you, usually change every 5 years or so. When you’re 16-18, it’s not the same as when you’re 25 or 30 or 35. I just thought when I recorded with Murder Inc, I got the freedom to start writing my own songs as a kid. I was able to let those songs actually reflect really where I was at. It’s just me in there doing what I feel. That’s just really what it is. Anything other than that is chance.

YouKnowIGotSoul: Reflect on your mindset when you were creating your debut album “Southside”.

YouKnowIGotSoul: With the albums “Street Love” and Lessons in Love”, it was your coming out party. You created your own team and it catapulted you to greater heights.

Lloyd: “Street Love” was shortly after a federal indictment trial, so it was walking on egg shells at times. I needed to put music out, but I was in a situation that made it difficult. It really was a time of just thanks. I was thankful it ended up working out. Just last week, it wasn’t looking good. Katrina happened during that time, it was an interesting time for my family and the city of New Orleans. I remember again, just being ignorant to what success was. I didn’t even know “You” was going to be popular. I was just trying to get out of my own way. Just thankful.

YouKnowIGotSoul: Next reflect on your “King of Hearts” album.

Lloyd: Vocally that was the hardest album I’ve ever made. Thank you to Polow Da Don and his strict regimen to make sure you push yourself. A lot of hard work. I also remember again, it was a moment of humbleness because no one wants to hear me yodeling on a song. What was I doing? Why did that come out? Then I guess just not having the foresight to walk with then. It was an interesting time because I went with Interscope instead of Young Money, and even to this day, maybe it would have been different if I went the other way. But I may not have had “Lay it Down”. No regrets, but that was a moment it could have gone either way.

YouKnowIGotSoul: What’s next for Lloyd? You had a project you had been working on before “Tru” even came out.

Lloyd: “Out My Window” was a concept I had before I made “Tru”. It consisted of a bunch of songs I wrote strictly on guitar with just vocals. I think it was a little bit more on the folksy side. I still have some street in me I want to express. Trying to find the balance. So I ended up leaving that project alone. I’m about 10 songs in, solid songs that I like. I’m going in more to record some choir vocals in a track. Look to have something out really soon. I’ll definitely release some more individual songs before a full project. But with the new single “Slow Wine Bass Line”, I just wanted to put something out that had that slow dance style. That just does not exist on the radio anymore, I don’t know why. Also I think the music has become so aggressive. Is anybody making love? I just thought this is wide open and I’d go for it.